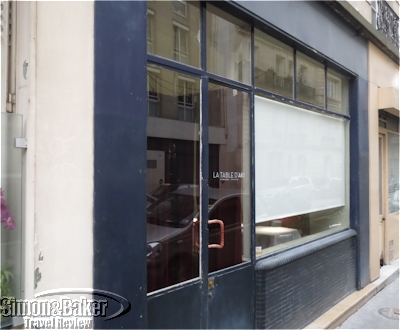 On our most recent stay in Paris, we dined twice at Table d’Aki, a new neighborhood seafood restaurant led by Chef Akihiro Horikoshi we much appreciated. While some aspects of the experience were less than stellar the meals themselves were outstanding and the reason we plan to return to and recommend the 16-seat unadorned restaurant with a staff of two, the Japanese chef and owner who prepared French food, and a server. 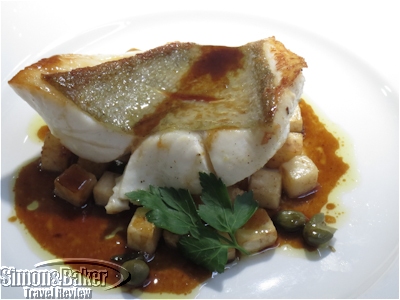 The first time we went to the Seventh Arrondissement restaurant with such a discreet sign we almost missed it we were forty minutes late for our 1 p.m. reservation. Although the previous day we had reconfirmed our reservation, as is customary in fine dining restaurants in that city, we had no mobile phone on us and traffic was thicker than we anticipated during our cross city trek resulting in our tardy arrival. An unhappy server allowed us to sit down but informed us, after consulting with the chef of the less than half full restaurant, that we were welcome to stay provided we dispensed with the starter option and only had a main (and dessert we discovered later). 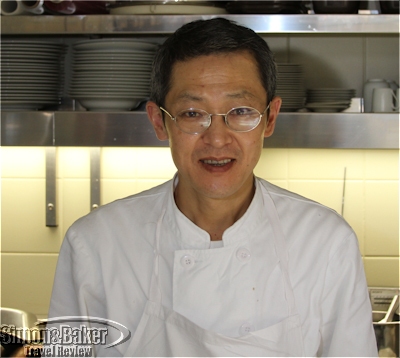 In addition to being eager to sample the cuisine we were hungry so we agreed to the condition. Within minutes we were seated at a window side table with white tablecloths and ordinary dinnerware sipping a glass of disappointingly lukewarm Krug champagne, hoping for a slice of bread and glancing out the window onto the quiet street and indoors at our surroundings. The restaurant had a minimalist design with bare eggshell walls. Individual lamp bulbs hung above each table, suspended from red cordoned leashes that joined together at the ceiling. Tables for two that could be set together for larger groups occupied two rows set against the wall from the curtained entrance to the open kitchen. One row, ours, was longer than the other. A door to the rear left led to a hallway, office and single restroom. 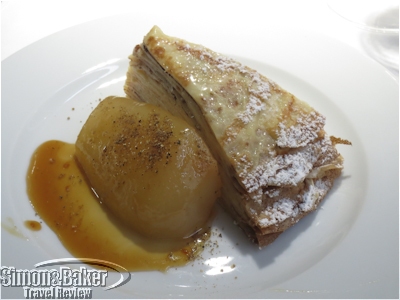 Moments later a perfectly prepared and seasoned St. Pierre fish, one of two main course options, with a light brown sauce arrived, erasing all unhappy thoughts. Just after bringing the fish to our table the server brought a basket of bread. A thousand crepe with pastry custard was the single dessert on offer. The light yet flavorful dessert completed the meal and left us wanting to return. 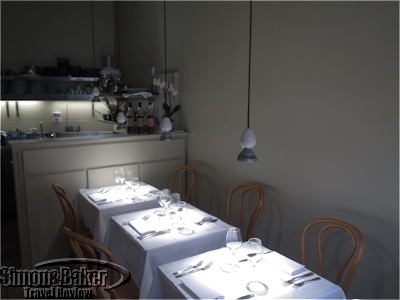 The dining area was adjacent to an open kitchen

Several days later, we were the first guests to arrive for our second meal. The server, the same slender blonde woman from the previous visit, commented on our on time arrival as she took our coats and offered us the table of our choice. Once again the restaurant was less than full for the lunch service. We were surprised to see her turn away two parties that arrived without reservations, explaining with emphasis that reservations were mandatory. 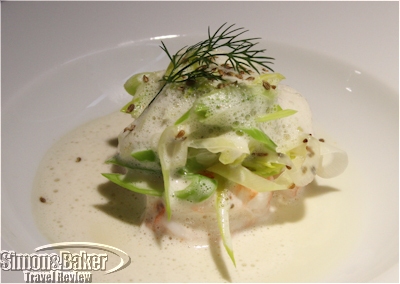 We overheard one of the parties explain that they had attempted to make reservations but were unsuccessful in reaching anyone over the phone. I empathized as I had trouble myself. The first time I attempted to reconfirm our reservation it took several tries in the space of 90 minutes to get through the busy phone line. The second time I called several times with no response, not even an answering machine. 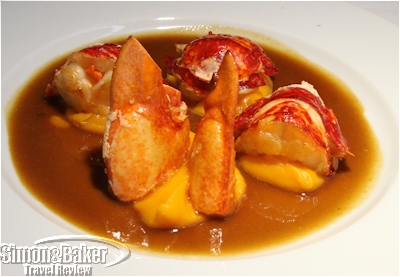 On reflection we realized that if they had welcomed the unexpected guests those guests who had taken the time to reserve a table in advance would probably have been left with fewer choices from the limited menu. This policy heightened our opinion of the chef, said to have been a longtime cook at one of the city’s top gourmet restaurants. 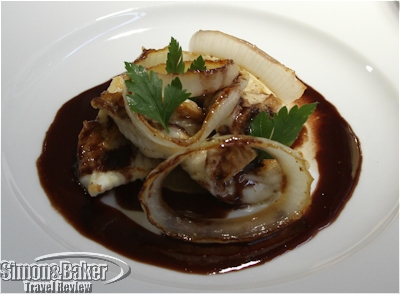 Fillet of sole with onions

From our seats we could see the chef cooking in the clean and well organized looking kitchen adjacent to the dining area. An advantage to the proximity was that our dishes arrived hot straight from the open kitchen (the scent of cooking was at times pervasive although it didn’t detract from our meal). On one occasion when one of our dishes was ready and the server was busy at another table the chef himself brought the dish to our table. 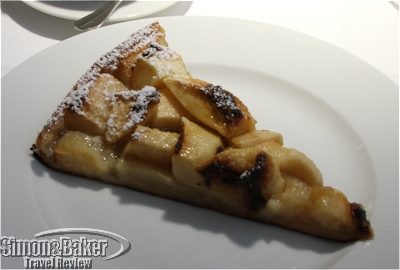 We sampled both appetizers on offer, St. Jacques and langoustine dishes, with favorable results. From the three main courses we sampled two, a small sole dish and a Brittany lobster with two sauces set atop mashed pumpkin (codfish was the third option). Both were delectable although the lobster was our favorite. 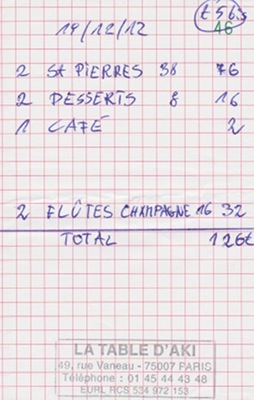 The handwritten bill for our first lunch

We opted for a half bottle of chilled 2010 Pouilly Foume Les Clarieres, a good match for the seafood. Dessert that day was homemade apple tart. Our server explained, when I asked if it had been made there, that the chef made it from scratch including the pastry. It was the perfect ending to a wonderful meal. We look forward to revisiting Table d’Aki (49, rue Vaneau, 75007, Paris, France, +33 1 45 44 43 48) the next time we are in the City of Lights, making sure to reserve a table and arrive on time.