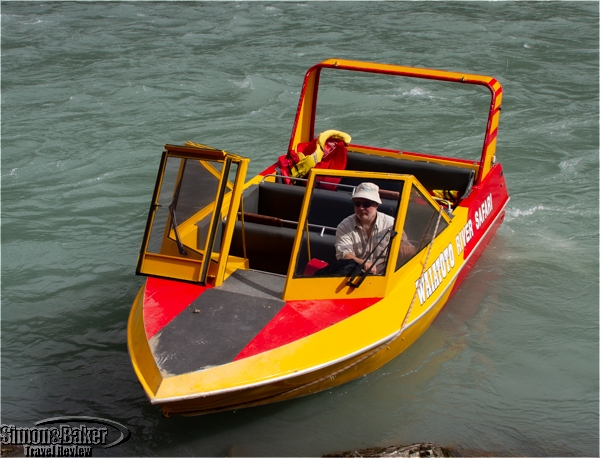 I didn’t know quite what to expect during the off the beaten track Waiatoto River Safari in the 355,000 hectare Aspiring National Park, part of the United Nations Educational, Scientific and Cultural Organization (U.N.E.S.C.O.) Te Wāhipounamu World Heritage Park in the South Island of New Zealand. My first clue was Ruth Allanson’s smile when we stopped to check in and sign release forms. It lit up her face and put me at ease. She and Wayne, her husband, owned the company. 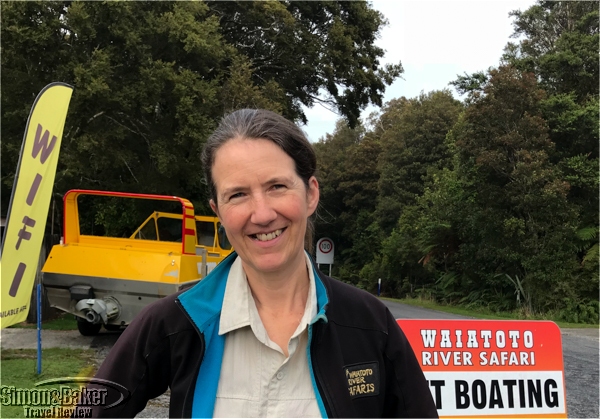 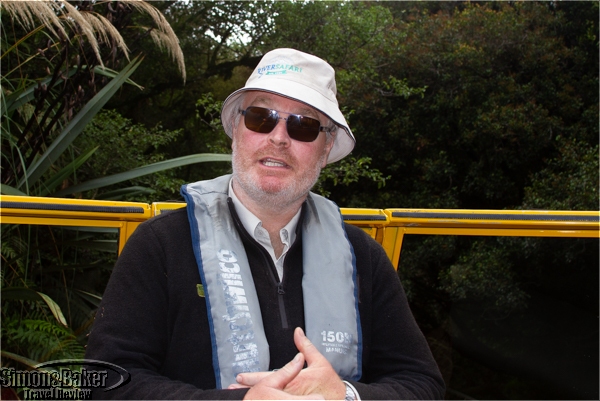 During the tour Wayne stopped in a sheltered corner of the river to tell us about the park. 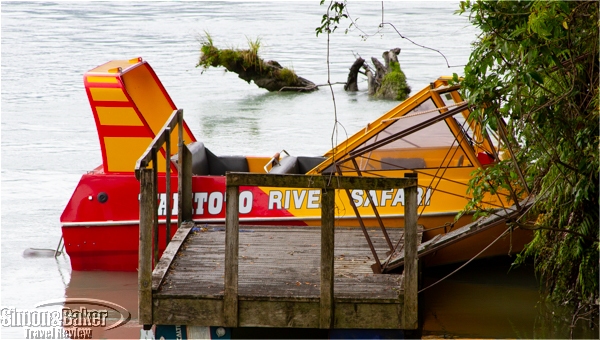 The simple indoor stand housed a desk, promotional brochures and a few local stonework souvenirs. From there a two minute drive led to our departure point, where moments later we met  Wayne on the bank of the 52 kilometer Waiatoto River. We were 23 kilometers from Haast and about 200 kilometers from Queenstown. 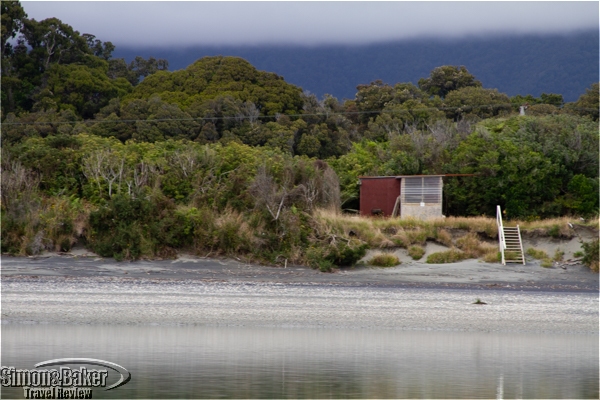 Although it was a clear summer day when we arrived (by the time we returned clouds had descended) there was a chill in the air that promised it would be cooler still on the boat. After applying liberal amounts of insect repellent against the sandflies and donning a loaner coat and   I was ready. Veronika Vermeulen, owner of Aroha New Zealand Tours and my guide on an Intrepid tour of the South Island, and I followed Wayne onto a 10-seat KeelowCraft for our two and a half hour private tour. Our boat was 5.7 meters long, 2.2 meters wide, required 125 milliliters of water to operate, and could accommodate up 11 passengers plus driver. It had a Chev 350 V8 petrol engine with a Hamilton 212 jet pump.

The setting was beautiful. The tour was one of the highlights of my trip to the South Island. The river and lush green vegetation were all around us. After the many crowded attractions we had passed on previous days it was wonderful to be alone on the river. This was in part because the tour was the only way to visit the unspoiled area by land and water. Later Ruth explained by email that the scenery and nature are unique to New Zealand. 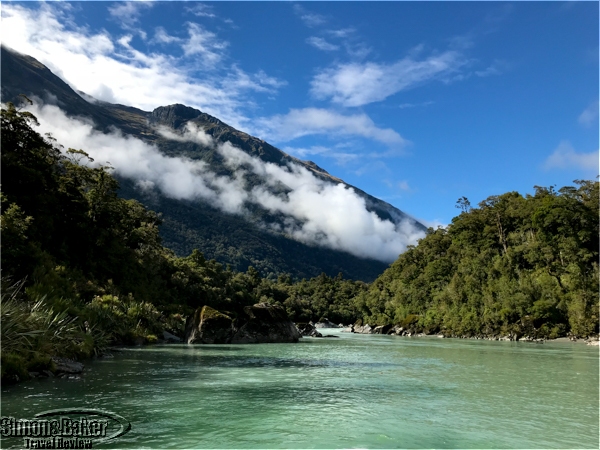 One of my favorite aspects of the tour was that we were the only people visible on the river. 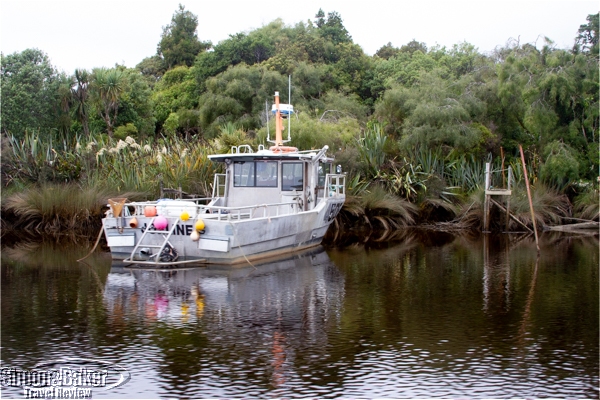 The loud engine sounds ensured we focused on the scenery rather than conversation. Wayne slowed down or stopped to show us points of interest, share information and indulge my photo needs. On one of the stops he offered us whitebait snacks. During the whitebait season, hundreds of locals descended on the river for their share of the tiny fish. Although it was past whitebait season Ruth and Wayne had a frozen supply from which they made the snacks. 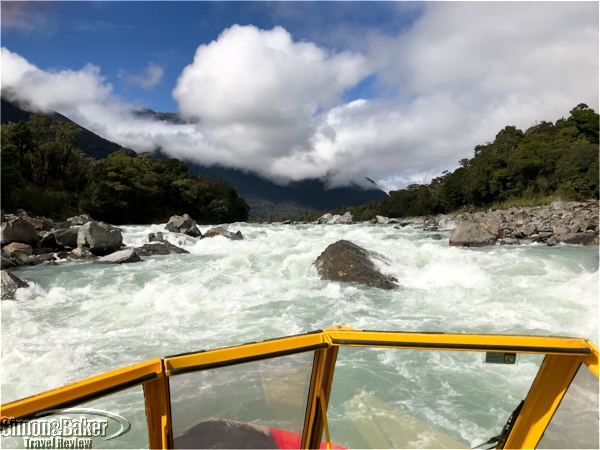 White water on the Waiatoto River

We covered 23 kilometers until the rapids became impossible to navigate. There Wayne tied the boat to the shore. It was easy to step onto land through the front of the boat. Veronika and I gazed at the rushing water, while Wayne secured the boat. Once he joined us we walked 500 meters into the quiet landscape before heading back down the river to the Hindley Stream. By the time we returned to our departure point we had covered 50 kilometers during the tour. 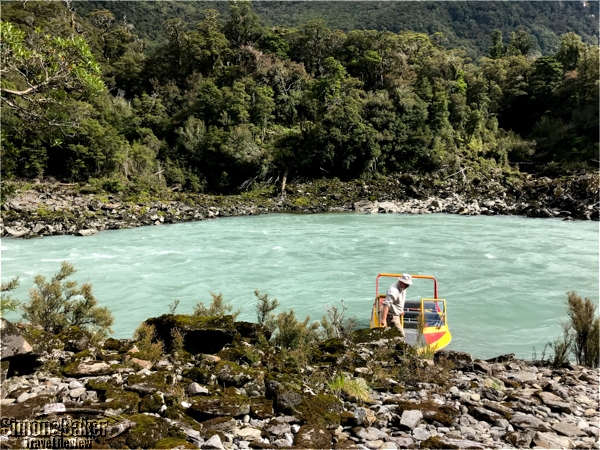 When the river became unmanageable we stopped for a short stroll.

It was nice to know the boats operated with Qualmark Environ motors specially imported for their low fuel use and clean running. I saw no pollution in the water or on land. The Allansons encouraged their clients to “take photos and leave footprints only.” 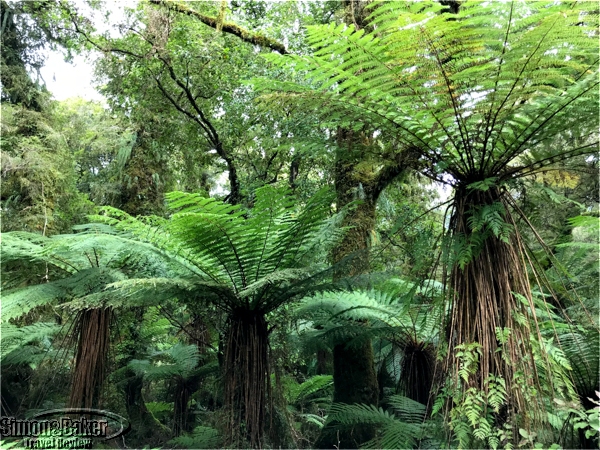 We encountered lush greenery on our short walk.

With advance notice they were able to accommodate some travelers with disabilities. Babies from about 5 months old (provided the life jacket fit) could join their tours and there was no upper age restriction. Life jackets were available up to XXXXL.

Once we glided over the river I was glad for the extra loaner layer and the safety of the life vest. Although at one point there were sandflies, perhaps because of the copious quantities of natural repellent I lathered on, they didn’t bother me at all. Waiatoto River Safaris Limited (975 Haast-Jackson Bay road, Hannahs Clearing, Haast, 7844, New Zealand, +64 3 7500 780, www.riversafaris.co.nz, info@riversafaris.co.nz) was owned and operated by a local family since 1997. Theirs was the only company with permission to offer boat tours on Waiatoto River (helicopter companies were allowed enter the park). Ruth and Wayne held Martime New Zealand commercial jet boat licenses, first aid and commercial pilot licenses as well as airplane instructor ratings. They had 12 years of jet boating experience.

According to the U.N.E.S.C.O. website, Te Wāhipounamu World Heritage Park covers 10 percent of the landmass of New Zealand. It has fjords, rocky coasts, towering cliffs, lakes and waterfalls. It was worthy of a detour. I especially enjoyed seeing it by boat.