A reason to stay longer at Atlanta airport 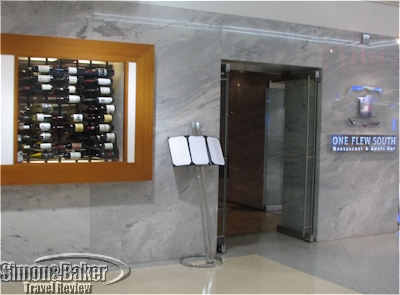 The entrance to One Flew South in Terminal E, Atlanta airport

I asked John from Missouri, our server, what he would order if it was up to him and he said one of each item on the menu. I knew we had to narrow it down from there and keep it light as we were facing a five hour layover before boarding a 15-hour flight to Johannesburg, South Africa. A few minutes later we settled on Pork Belly Sliders (two in a shared order), Cauliflower and Parsnip Soup, Seaweed Salad, Benton’s Bacon “BLT” and a Salmon Hot Pot from the mains. That turned out to be a lot of desirable food. We washed that down with glass bottles of Saratoga Springs still water and iced tea. We liked that John brought a carafe (and refilled it during our meal) with extra iced tea and a glass with large ice cubes so the iced tea was always plentiful and chilled. 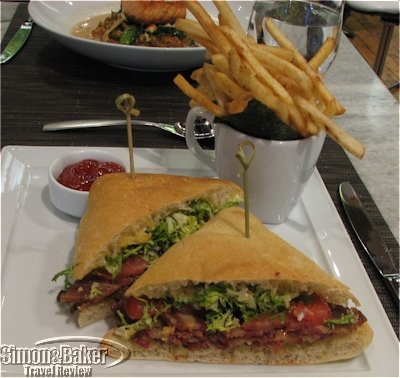 The BLT with emphasis on the bacon

While we waited for our order to arrive I looked more closely at the uncrowded restaurant. We sat in the back of the room at a small table with a stone top and a gray runner in the middle on metal and white cushioned half back chairs. One side of the room faced the main area of Concourse E of the Hartsfield-Jackson Atlanta International Airport, one of the busiest concourses in one of the busiest airports in the nation. Although it was possible to see the concourse through wood slats for a brief while we forgot we were at an airport. 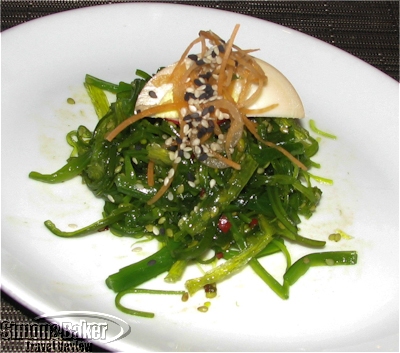 One wall was papered with a forest motif. Modern urban music played in the background and although we arrived in between meal times a few guests were scattered around the restaurant and sushi bar. It had been crowded earlier, our server told us. One man sat against the window with a chilled bottle of wine and his laptop. A woman with a British accent sat facing away from us toward the restaurant entrance. In the corner a man ate while he spoke on his cell phone. At the nearest table there was a couple. 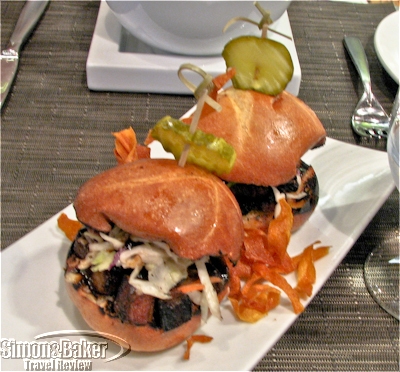 The first items to arrive were the sliders and the soup. As John set the soup, in a white soup bowl atop a matching square base, before me the scents of cauliflower and paprika wafted to my nose. A swirl of paprika oil and a handful of crunchy pumpkin seeds perked up the subdued cauliflower color of the soup. It was just the right temperature and the flavor combination worked. My lunch partner’s eyes sang with joy when he bit into the pork belly slider. When my turn arrived I too was delighted. The slider was outstanding. The flavorful bun had just the right texture and tasted homemade. The pork belly was alternately crunchy and soft and the sweet barbeque sauce rounded everything together, dripping gently onto the plate. Crispy sweet potato shavings served as tasty garnish and a sweet gherkin was attached to each slider with a natural toothpick. 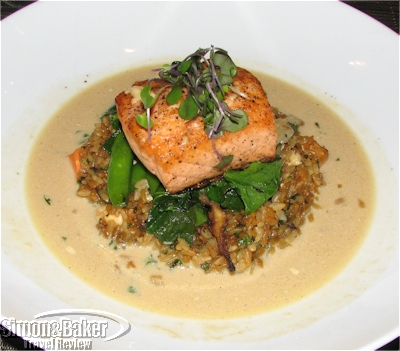 The salmon resting on its rice island in the miso soup

The BLT sandwich and salmon arrived next. The salmon itself was tender, perfectly cooked and delicious. It sat on a rice bed with tofu, vegetables and miso soup. The base of the salmon dish won over one fan at the table. The bacon part of the Bacon, Lettuce and Tomato Sandwich was king. Our server told us the chef makes his own bacon; and it was delicious. The sandwich, garnished with shredded lettuce and small slices of tomato, had a strong smoky bacon flavor. The focaccia bread was a match for the contents and a truffle mayonnaise took the bacon flavor to the next level. Thin five flavor French fries in a bowl picked up any hunger slack. Yum. 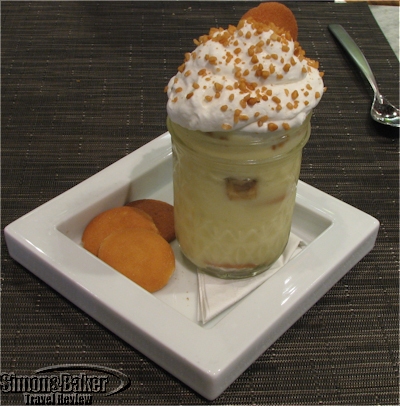 I didn’t think I could eat any more until I tasted the “OFS” Banana Pudding that John confidently recommended when we asked about dessert. Fresh whipped cream (with a real homemade texture and taste) with crunchy sweet crumbles made up the top layer. Below the cream there were layers of fragrant and creamy banana pudding. It was just what we needed to complete the meal. 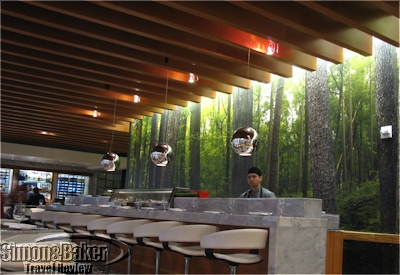 The sushi bar set next to a wall of the restaurant

The food alone was worth a return visit. Hats off to Executive Chef Duane Nutter and his staff. The setting and the service complimented the meal well. We had hoped to stopped at the restaurant on our way back home but we barely managed to make our connection. Should we find ourselves with enough time for a meal while connecting flights in Atlanta in the future we will return at the first opportunity. An 18 percent gratuity, the menu indicated, was automatically included in the bill. John earned his and then some. One Flew South (Concourse E, Hartsfield-Jackson Atlanta International Airport, Atlanta, Georgia, +1 404 816-3464, fax +1 404 816-3467, www.oneflewsouthatl.com).