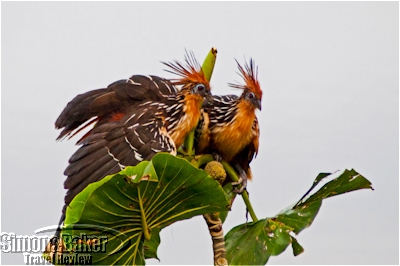 Hoatzin birds were a frequent sight near the lodge

“Stop, stop!” I sputter, too excited to keep my voice down. Fabian, the local park ranger who is paddling, doesn’t speak English but he gets the idea and brings the canoe to a smooth halt. Roberto, my Ecuadorian guide who speaks English fluently, looks at me askance. He has just pointed out a large bird perched in the dense jumble of rainforest. It looks like a chicken with too much turquoise eye shadow and a bad hair day. “The bird,” I exclaim. “Yes, it’s a hoatzin,” he reiterates matter-of-factly. He clearly fails to grasp the importance of the moment. So does the bird, which has by now been joined by two of its friends. They are engaged in a croaky argument while heartily tucking into the foliage. I feel compelled to explain that on a previous Amazon visit, a thousand miles downriver from here, I had once spent a whole week, including a half-day hike in the waterlogged underbrush, in search of a hoatzin. And I had only managed to hear its distinctive cry and ponderous take off as it vanished into the forest canopy. “We have lots of hoatzins here,” Roberto assures me after I have photographed these to my heart’s content, and for good measure a rare rufescent-tiger heron that has been observing the proceedings from a nearby stump. 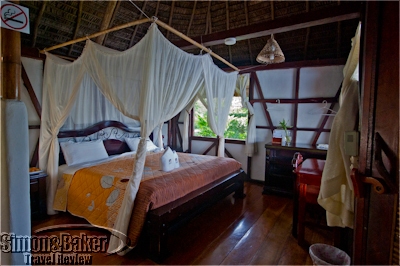 The king size bed was draped in mosquito netting

We resume our slow way upstream under an arch of tangled mangroves and palms, along the narrow channel that connects the Napo River, one of the most important tributaries of the Amazon, to Anangucocha Lake. We are in the heart of 21,400 hectares (82 square miles) of conservation land located on the ancestral territory of the Kichwa Anangu community, in the northwest corner of Ecuador’s Yasuni National Park. The park is a UNESCO Biosphere Reserve regarded by scientists as one of the most bio-diverse areas on the planet. Several notable sightings later, including a tree-toed sloth and my first ever monk saki monkey, we reach the lake. On its far side, the shore is dotted with the thatched-roofed, bright ocher adobe bungalows of the Napo Wildlife Center luxury eco-lodge. 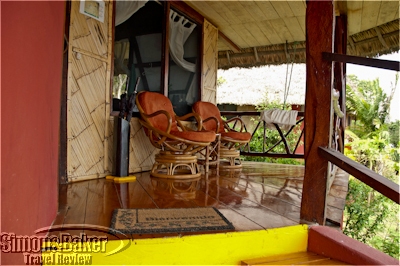 My bungalow had a shaded terrace overlooking the lake

Set into some of the most pristine rainforest environment I have ever visited, the lodge is designed to meet the high expectations of international tourists for wilderness accommodations. It features attractive bungalows with private terraces overlooking the lake, modern bathrooms, round the clock electricity and WiFi connection throughout the property. Strategically located observation towers at the lodge and in the forest offer a unique perspective of the abundant wildlife around the lake and above the forest canopy. My wildlife viewing is exceptional, not only for its abundance and variety but because of the excellence of the guiding. At the lodge, guides come in pairs: a bilingual, state-licensed guide and a native Yasuni Park-licensed ranger who also acts as a local guide, sharing his knowledge of plants, medicinal plants and Kichwa traditions. One evening, they take me on a nighttime canoe ride in the swamps near the lodge, with a special spotlight to view nocturnal creatures. 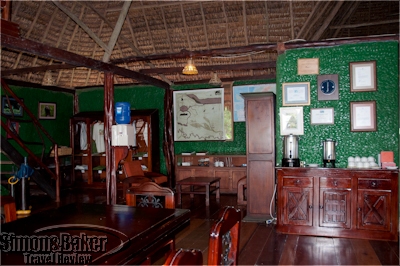 Coffee was served around the clock in the main hall

Beyond the excellence of accommodations and wildlife viewing opportunities, a highpoint of my visit is the opportunity to observe first hand the positive impact of the Napo Wildlife Center on the daily life of the Anangu people. The lodge and conservation land are wholly owned and managed by the Kichwa Anangu community. They are the keystones of a far-reaching program to improve the quality of life of the people and preserve the integrity of their ancestral territory and culture while providing them with sustainable employment. Most of the staff comes from the community. Their pride in the Napo Wildlife Center is palpable, and translates into warm and attentive service. Additionally, while the life of the community is separated from tourism activities, one hour downstream from the lodge, I see women welcome guests to the Interpretation Center facility adjacent to their village. It is especially rewarding to be able to connect with them (with Roberto as interpreter) as they introduce me to the tasks of their daily lives as well as their traditional Kichwa crafts and dances. 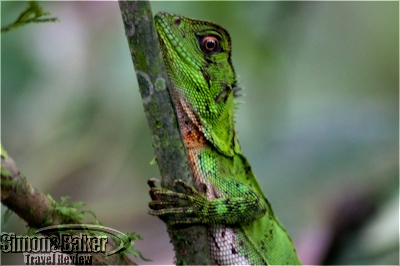 I am gratified to hear of the rigorous sustainable tourism practices implemented by the Napo Wildlife Center program. Profits are reinvested within the community, with education and healthcare as major priorities. The center also returns a share of the annual profits to each family and provides a stipend to the elderly. To limit the lodge’s impact on its environment, it has implemented an environmentally sustainable sewage system, with waste waters treated to high standards before being released into the swamps. Trash is kept to a minimum and composted whenever possible. What is safe to burn is burned and buried, with the remainder transported to designated landfills outside the park. And these practices have been extended to the Anangu community at large, for a cleaner, healthier living environment. 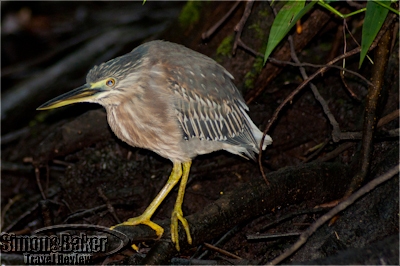 The Napo Wildlife Center is also engaged in a strong anti-poaching program, with its conservation land patrolled by community rangers employed and equipped by the lodge. The Napo Wildlife Center was recognized in 2009 with the Rainforest Alliance Community Sustainable Trend Setter Award, and the Best Jungle Lodge Award from the Latin American Travel Association at the World Travel Market in London, U.K. And it is becoming a model for other sustainable tourism community projects throughout Ecuador. 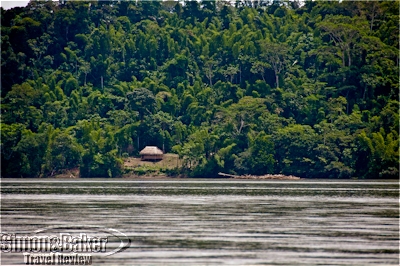 And by the way, Roberto was right. We came across so many hoatzins during my four-day visit that by the time I left, I barely spared them a glance. Visit the Simon & Baker Travel Review to read more about my stay at the Napo Wildlife Center.