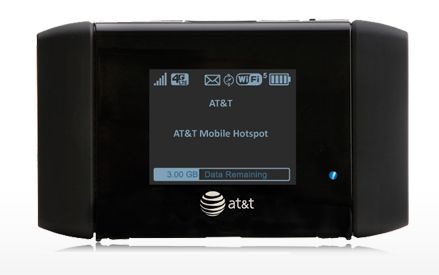 We like to stay connected when we travel. Our latest gadget in this quest is the new ATT Elevate 4G, a portable WiFi hot-spot that allows up to five devices to share a single data service connection. Traveling with a laptop, iPad, Kindle and Skype phone can be a challenge even with today’s ubiquitous WiFi network access, but the Elevate can make connecting simple. The access speed on a 4G network was great, making Skype calls clear and cellphone and web browsing very usable. Enabling the Elevate for international use proved to be the biggest challenge.

The Elevate is a convenient size, and it can be charged via USB or the AC adapter. The devide supports tethered use via USB or up to five devices via a wireless connection. The microSD card that came with it is pointless, since it is only accessible via the USB connection and not to wireless clients.

The online menu provided useful feedback on ATT and roaming data usage, and access to control a handful of settings. The most critical of these is the option to connect to non-ATT networks when roaming. Failing to turn on this feature prevented it from working outside the United States as by default the modem would only connect to ATT networks. SMS messages were delivered via the menu system. 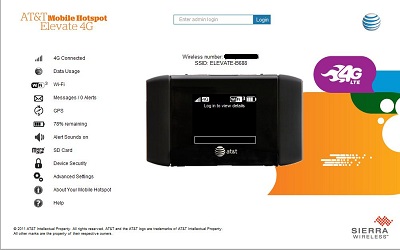 The menu from the ATT Elevate 4G

It was a simple process using an online form to obtain the device from ATT, but it took multiple calls to customer service to get the domestic and roaming services enabled. Getting international data roaming enabled was particularly vexing, as multiple customer service representatives did not seem to understand how to get these features working. A critical step was getting transferred to the international data desk.

We never could get it to connect on the first trip we took it on to India, Nepal, Thailand and Japan. Before traveling to the Caribbean, where the data plan covered several of the islands we were visiting, we activated an international prepaid data package. We had more luck in the Caribbean, but results were still mixed. Generally speaking, each location either worked or it did not, and no amount of playing around with settings made a difference.

Still it was exciting to be offshore in Saint Barths with WiFi access at 4G speeds for all our devices thanks to the Elevate 4G. Several improvements would enhance the service. For example, the possibility of sharing the microSD card out to the wireless devices and more consistent roaming. At the same time, I find it worthwhile to keep the data connection separate from the gadgets and be able to upgrade the data network independently in the future.