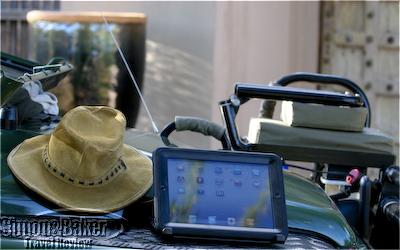 Our iPad has proven to be an excellent tool when traveling to process email, create documents and preview photographs. Among the wide variety of sleeves, covers and folios available for it, the OtterBox Defender stood out with its focus on protecting the fragile device in rugged environments. We were departing to spend several weeks in the game reserves of South Africa and wanted a case that was functional and could provide protection during the transfers over dirt roads and rough handling by porters. 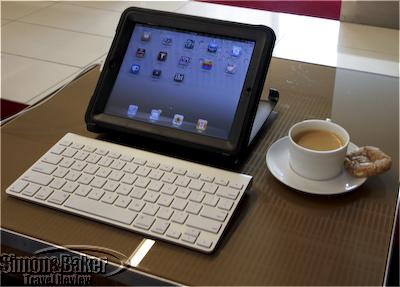 During a layover in the Air France lounge

Assembly was relatively easy, although we did not use the clear plastic screen cover, having already installed one made by a different manufacturer the day we bought the iPad. The installation video on the OtterBox website was helpful and better than the tiny illustrations on the package cover. The cleaning cloth is also a nice bonus and comes in handy when fingerprints are visible after a hard day of use. Disassembly with the third party screen cover can be challenging and we do not plan on putting the cover on and off frequently. 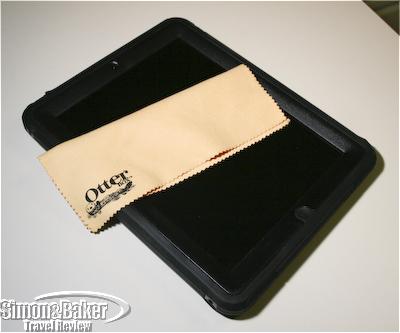 A cleaning cloth was included with the Defender

Once the Defender was assembled, the iPad feels heavier, but simultaneously easier to grip and more solid in general. All of the necessary buttons and ports are easily accessible either right through the cover or by opening a tiny flap in the case of the headset jack. With the case installed, it is more comfortable to set the device down on a table or other hard surface without concern for the iPad. There is a small panel that can be removed to allow access to the interface port for charging and connecting to external devices. 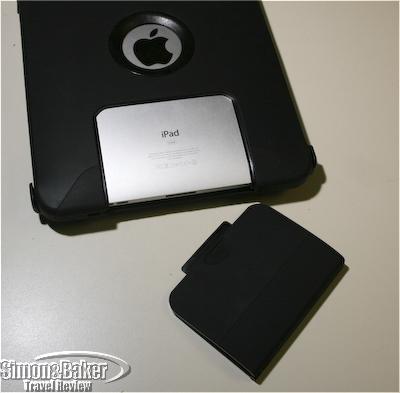 The case with the interface panel removed

A favorite feature is the hard shell cover which can be snapped on to protect the face of the device, or snapped on the back of the iPad and out of the way. It also doubles as a stand to support the iPad at a comfortable viewing angle. With the Bluetooth keyboard connected and the iPad resting on its stand, editing a document or navigating the web is as efficient as using a laptop computer. The stand is sturdy and secure enough to allow fingertip control, an essential function of the device. 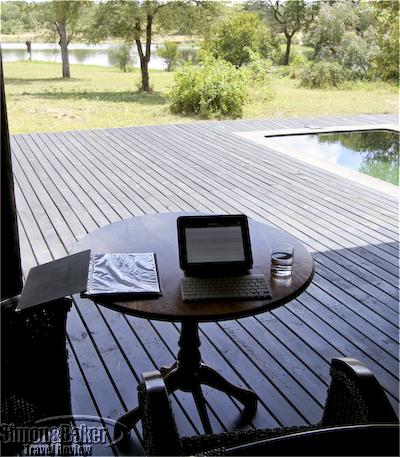 Working at Chitwa Chitwa lodge with the iPad on the stand

Turning the iPad off and attaching the shell over the face allowed us to pack the device into our camera box without worrying about it being damaged, scratched or accidentally turned on and running down the batteries. We picked up a sleeve for the keyboard from WaterField designs in San Francisco. This combination was low profile and kept our equipment in top shape throughout our lengthy journey. 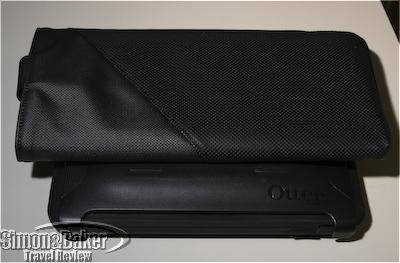 The iPad with the cover installed and keyboard in its sleeve

The case kept our first generation iPad safe and secure throughout our safari travels and for daily use at home as well. With the improved grip and rubberized exterior the iPad is friendly to glass tabletops and when passed from one person to another. The exterior is attractive and consistent with the iPad design. We plan to leave the iPad in the OtterBox Defender case (Otter Products LLC, 1 Old Town Sq #303, Fort Collins, CO 80524 888-695-8820, +1 970-493-8446, http://www.otterbox.com/, customer.service@otterbox.com) for the foreseeable future. 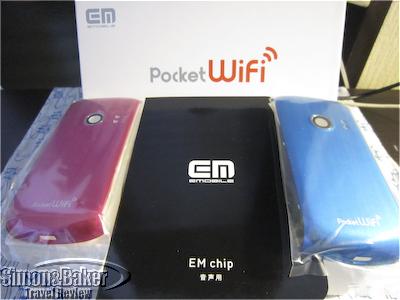 The Emobile Pocket WiFi-S (model number S31-HW) is a versatile Android-enabled smartphone that stands out thanks to a superb feature: with a touch of a button the user can create a personal Wi-Fi hotspot. In Japan, the only place where it was available when I tested it for 42 days, locating public Wi-Fi can be very difficult. Having my own Wi-Fi means I never have to worry about finding a wireless network that connects with my laptop, iPad, or gaming device. I can connect up to five different gadgets simultaneously.

In practice the wireless performance of this 105 gram phone manufactured by Huawei Technologies of China and distributed by Emobile of Japan wasn’t as fast as the Emobile’s Wi-Fi only Pocket WiFi (D25-HW) model. At times, the plastic and glass Pocket WiFi-S’ speed noticeably struggled in the slow lane; that was likely when Emobile’s network traffic was particularly clogged. 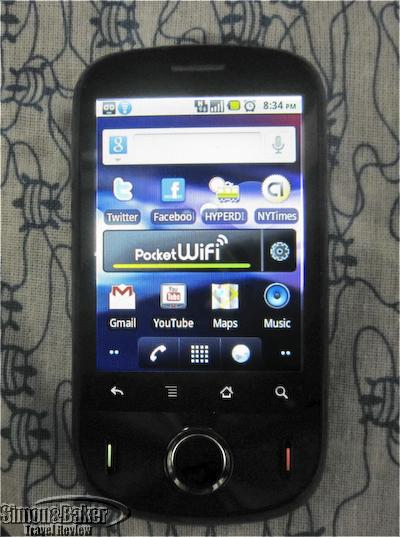 The front of the Emobile Pocket WiFi-S

What I lost in speed, however, I gained with the versatility of a full-fledged smartphone. I was able to make phone calls, browse the web, send and receive email, consume media, and navigate with GPS just like with any standard smartphone on the market. Also, because it runs Google’s Android mobile operating system, I was able to download apps from the Android App Market. For example, train schedule and route apps like Hyperdia or Jorudan helped me navigate the labyrinth of Japanese rail. I downloaded one of these apps and recycled the wrinkling pocket rail guide I had been toting around.

The smartphone, 54.8 × 104 × 13.5 millimeters in size, ran Google’s Android 2.2 operating system with a menu system in English and Japanese. The wireless (b/g) WiFi hotspot was capable of connecting up to five devices at HSPA 7.2Mbps down/5.8Mbps up connection speeds. It included a rear-facing 3.2 megapixel photo and video camera, 2.9 inch touchscreen, built-in speaker, 3.5 mm audio jack, Bluetooth 2.1, and had 512MB of memory with expandable memory through a microSD slot. 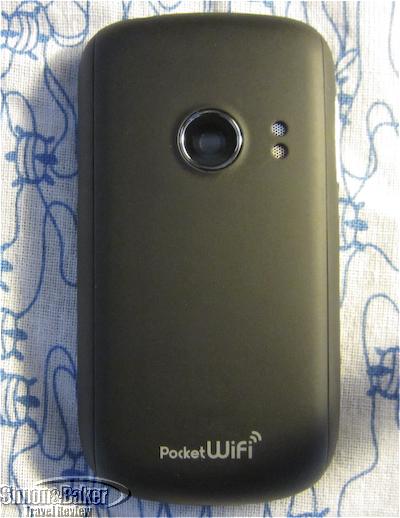 The back of the Emobile Pocket WiFi-S

The phone I tested had a battery length of five hours of talk time, four hours of standard usage, and 240 hours of standby. It came with one battery pack, AC adaptor, USB cable, microSD card, and three color covers, black, blue, and pink. The retail price was 19,800 Japanese yen ($235) as part of a two year contract, and phone and data plan costing about 8,000 Japanese yen ($95) per month.

While not as slick and graceful as its fruity and shiny rival, the Pocket WiFi-S does have that personal Wi-Fi network trick up its sleeve. 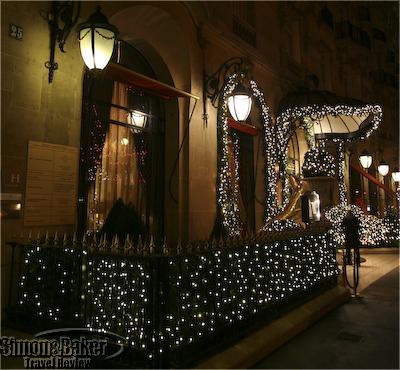 The entrance to the Hotel Plaza Athénée

After our last visit to the Alain Ducasse restaurant at the Plaza Athénée in 2008, the famous French chef announced he was going back to basics and installed a new chef at his best known restaurant in Paris, France. While this could spell disaster or significant changes in the dining experience elsewhere on our most recent visit to the Plaza Athénée gourmet venue late last year we discovered it did nothing to mar the superlative dining experience offered at the Restaurant Alain Ducasse au Plaza Athénée. 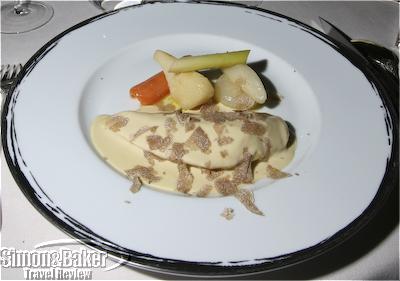 We were pleased to find favorites like the Alba truffled chicken dish and new selections like the crock pot cooked lobster. The ambiance and service were outstanding in spite of a full dining room. 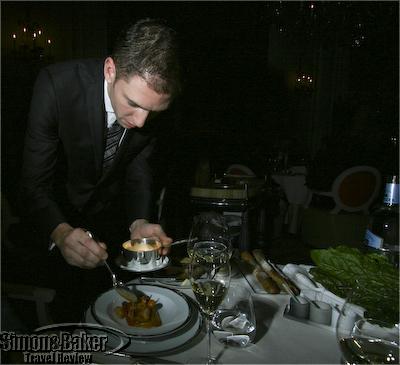 When we heard they had redecorated the restaurant we expected radical changes. Instead the designers kept the classic and modern combination decor and added an artistic touch. Four large screens were covered in unique pieces of embroidery representing produce, garlic, mushroom, and artichoke.

It required a team one year to bring the embroidered screens to life from the graphic designs created by Patrick Jouin. Stefan Glass provided the expertise of the Müller workshop near Nuremberg, Germany where the pieces of satin and leather were cut with high precision machinery.

Once that was done Sébastien Barilleau from the Cécile Henri workshop in Paris, added beads, sequins, and tubes rock pearls with the traditional Lunéville technique (the embroiderers work on the back of the piece, positioning the haberdashery by touch on the front and stitching them in place with chain stitch). The screens returned to Germany for meticulous assembly of the sections and back to Paris for completion. 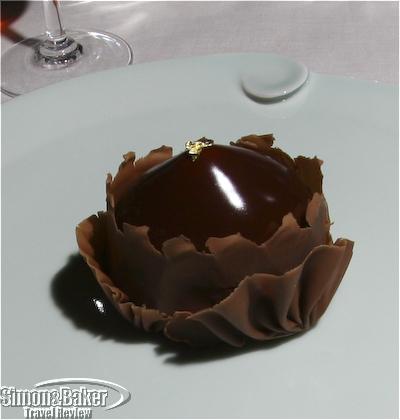 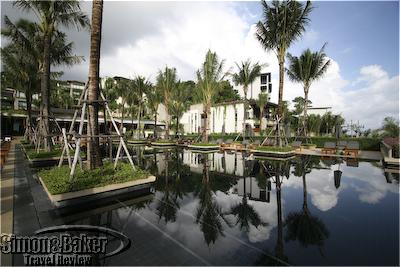 The main pool at Andara Resort and Villas

One of our team members stayed in a spacious, well furnished and well decorated rental home with a lovely bay view on the popular island of Phuket, Thailand. In spite of the punishing rainy weather the home, located within a home owners and resort property estate, with a dedicated on site staff person was comfortable and afforded many leisure creature comforts including an infinity edge pool and terrace, a game room, a fully equipped kitchen and television room. 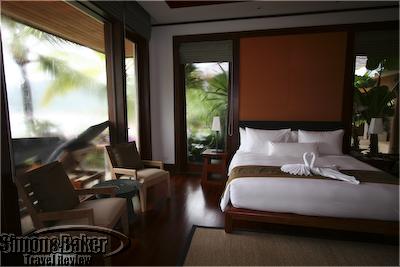 Within the resort there were concierge services and facilities including a restaurant, shops, fitness center, and swimming pool. Visit the Simon & Baker Travel Review to read about Villa 9 at Andara Resort and Villas.