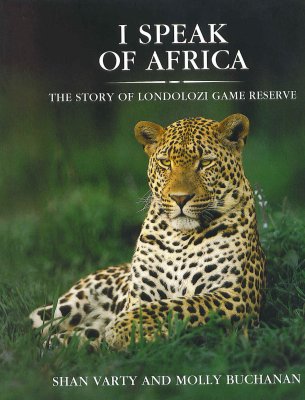 I Speak of Africa  book cover

Leopard and wildlife lovers and fans of Londolozi Game Reserve near South Africa’s http://simonandbaker.com/kruger may enjoy I Speak of Africa (Londolozi Publishers), a hardcover book of the game reserve and its lodges as well as and its rich wildlife, including some of the leopards that have made the property famous. Filled with color photos on almost every page, the 216-page hardcover book written by Shan Varty and Molly Buchanan tells the story of Sparta as the original farm on the Sand River was called.

Eventually Sparta became a game viewing estate with luxury guest accommodation and was renamed Londolozi, meaning “the protector of all living things” in Zulu. In the book, Varty, a member of the founding family, and Buchanan, a public relations consultant specializing in wild life conservation, share the story of the evolution of land, and four generations of the family that owns it, from farm to hunting property to a world class safari destination.

The second edition of the book, published in 2007, includes a forward by former South African President Nelson Mandela. It is divided into eleven chapters: A Long Time Ago, The Pioneering Years, Wild Days, Hard Times, The Quest for Solutions, Close Encounters, Life at Londolozi, Widening Horizons, The Development of the Model, On the Wings of the Bateleur, and The End Is the Beginning. The majority of the photos, according to the credit list, were taken by Lex Hes. There are also photos by Peter Johnson (Corbis), Richard du Toit, Guy Stubbs, James Marshall, and Mike Myers as well as library photos.

Varty is director and publisher of I Speak of Africa, and a partner in Londolozi. Prior to writing the book, she lived with her family in the African Bush for a dozen years. During that time, she dedicated herself to the development of Londolozi as a top tier safari property with an emphasis on conservation. She was a founder director of Conservation Corporation.

Buchanan met Dave and Shan Varty in 1990 at the inception of Conservation Corporation. Following the meeting she began providing publicity support for their company. She has traveled extensively in sub-Saharan Africa and specialized her public relations business in the area of wilderness conservation. Buchanan, in partnership with Peter Johnson, also launched a publishing company.

Elena and Gary visited Londolozi Tree Camp for the first time this year. To learn about this newly rebuilt safari lodge, be on the look out for the upcoming dedicated feature in our http://simonandbaker.com/krugerpages.