Basilica, new book about the building of St. Peter’s, a fun read for history buffs 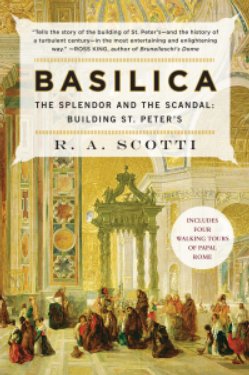 Basilica: The Splendor and The Scandal: Building St. Peter’s

History buffs and Rome enthusiasts may find it interesting to know that Pope Julius II caused a scandal when he ordered the construction of St. Peter’s, the symbol of one of the most revered religious centers of that time. It may also surprise some to discover that the pope rejected Michelangelo, one of the world’s most famous sculpturers and an artist of renown in his own time; and later after the artist’s departure wanted to lure him back to Rome.

The author’s fluid writing style and ability to condense hundreds of years of political rivalry and architectural and building activity of the construction of one of the world’s most famous architectural marvels, make Basilica: The Splendor and The Scandal: Building St. Peter’s an entertaining and instructive read.

A religious magnet for millions of faithful, friends and enemies, the curious and the profane, St. Peter’s history is closely entwined with the history of Rome. The book is written for fans of Rome and the Vatican, whether faith or art driven. Author R.A Scotti distills centuries of history, intrigue, and religious and pagan lore, painting a picture that, though wracked with human failings, inspires.

By the 15th century Rome had become a broken down medieval town. The efforts of the Vatican’s most flamboyant popes and some of history’s most gifted artists and the creation of the new basilica, made Rome one of the centers of the world once again.

The Basilica took 200 years to complete, outlasted 27 popes, and sparked the Protestant Reformation. Over the centuries of its construction, Guttenberg invented the printing press, Columbus stumbled on a new continent, Magellan sailed around the world, Henry VIII married six times, Shakespeare wrote all his plays, and the Mayflower landed at Plymouth Rock.

Through Scotti’s eye the reader can see the failings and successes, the political intrigues, financial, architectural challenges and countless other obstacles the project supporters faced. In the end, it’s a tale about larger than life figures committed to making the basilica a reality.

Scotti, the author of two previous works of nonfiction, including Sudden Sea: The Great Hurricane of 1938 and four novels, lives in New York City.

Click here to purchase Basilica: The Splendor and The Scandal: Building St. Peter’s