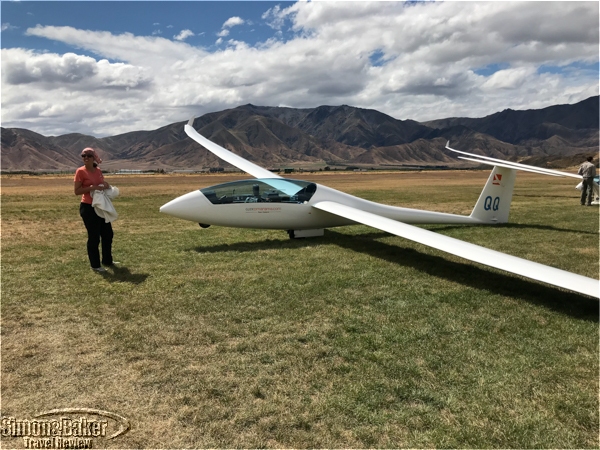 Sabrina Schels, my pilot, next to our glider

In hind sight going gliding in lieu of the Mount Cook activities that were cancelled due to blustery skies may not have been the smartest choice weather wise. But, my tour time was nearly over. It was the last day of my Intrepid tour. So Veronika Vermeulen, my tour guide, and I signed up for a one hour Instructional Trial Flight with Glide Omarama (Airport Road, Omarama, New Zealand, +64 (3) 438 9555, www.glideomarama.com, info@glideomarama.com). 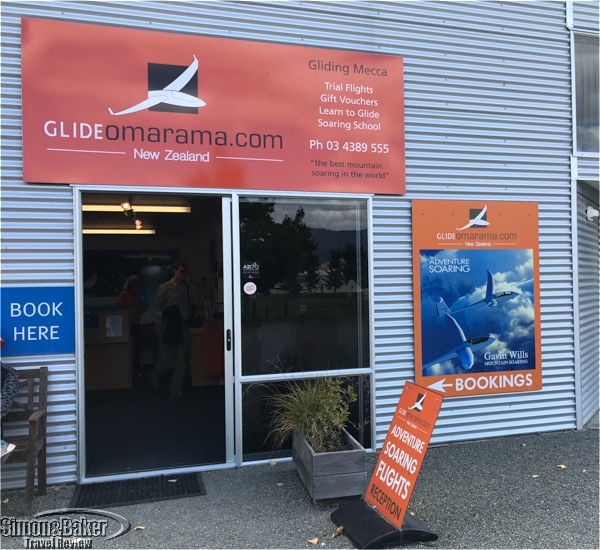 The entrance to Glide Omarama

On the ground everything seemed fine. It was sunny and warm. The early afternoon sky was bright blue dotted with pretty white clouds. After signing the Glide Omarama release forms in the office we met our pilots, who escorted us and the other fliers in a van to an open field. Each of us would be in a glider with a pilot of our own. A plane would tow each of the four gliders in the field. Sabrina Schels, my pilot, described our German made 400 kilogram glider (700 kilograms with pilot and passenger) and its features. I paid close attention to ensure I followed her instructions. Although she spoke with a slight German accent her instructions were clear and easy to follow.

She asked that I be careful not to hit the glider top with my camera, explaining the top cost the same as a full size vehicle. Later I understood how easy it would be to bang the cover with my camera without meaning to do it. I began to listen in earnest when she explained that in an emergency we would push the top of the glider off and jump. Being trapped beneath the clear cover seemed possible, a thought that hadn’t occurred to me until then. When she pointed to a plastic bag, indicating I should use it if I became airsick, I began to wonder how bumpy the ride would be. She asked me to let her know right away if I felt any discomfort. 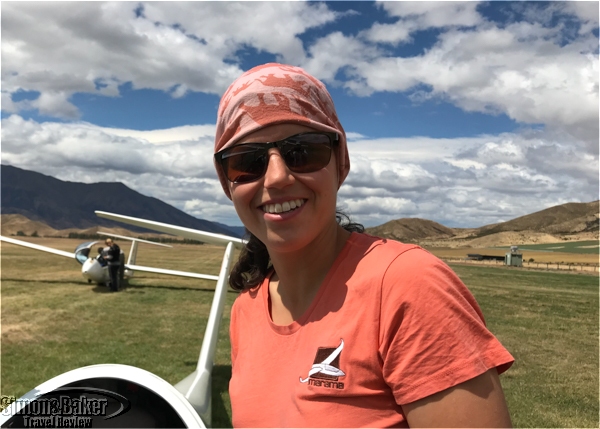 In the foreground Sabrina, in the background another glider

Donning a lightweight parachute with her assistance I tucked my cameras on the side of the glider. I sat in the front facing a sea of instruments. She took the back seat. Soon it was our turn. I was looking forward to the flight. The tow plane tug was barely noticeable and in moments we were airborne, moving away as if by magic from our starting point. After she released the towing cable Sabrina began to circle ever higher using thermals to rise. It was a bumpy ride with the glider dipping often and with it my stomach. From where we were we could see for miles. It was beautiful. 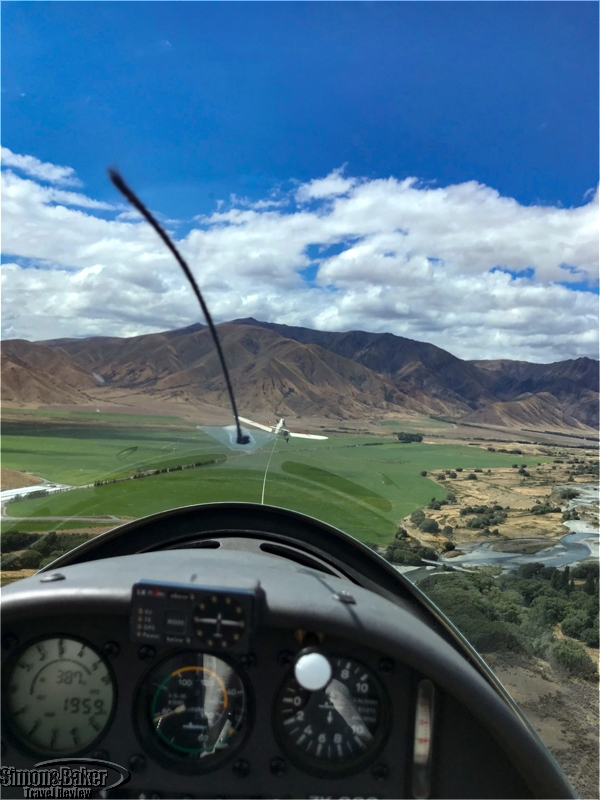 In much less time than I would have anticipated my lunch began to dance uncomfortably in my belly. I hoped it would pass, but I had no such luck. I let Sabrina know and she stopped circling. As soon as she did I felt better, well enough to admire the scenery. As pretty as it was every cell in my body ached for my stomach to settle down. I yearned to land. Instead I glanced to either side of the glider, admiring the view.

“Good gliding weather allows us to use different forms of lift such as thermals, ridge lift, convergence and mountain lee waves to operate and fly cross country six to seven days a week,” Sabrina said later when I asked about optimal gliding conditions. Under crystal clear air it is possible to see 200 kilometers into the distance, she explained. “Omarama is especially famous for its huge and powerful waves. We have highly experienced staff which are working for us full time. Some of us have even flown World Championships. Every glider flight is a very personal and unique experience especially tailored to the interests of our clients, as it is a one on one instruction. Not only can we take people up for the first
flight but also train them to become pilots themselves or teach experienced pilots how to safely fly in the mountains.” 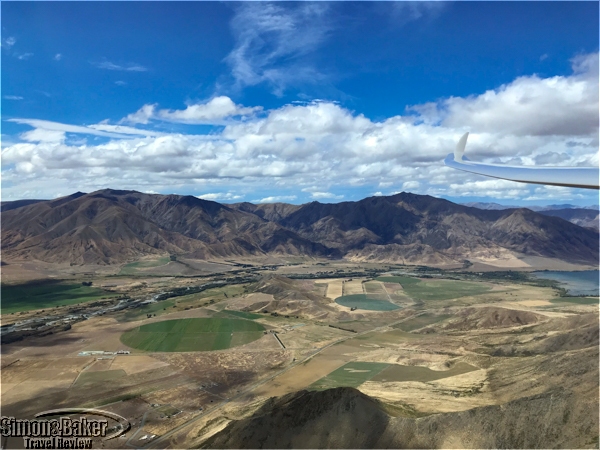 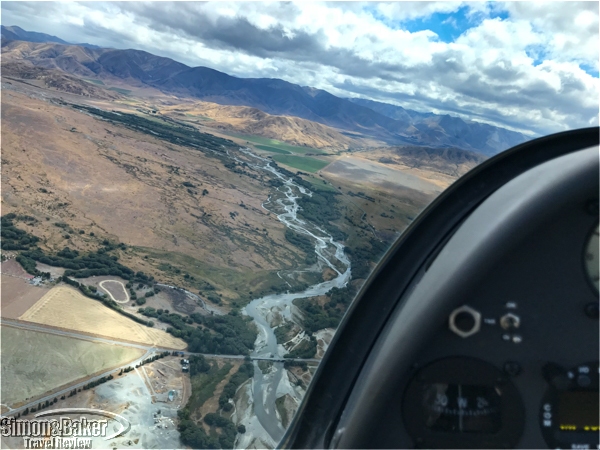 I sighed with relief when we landed. In no time we were out of the glider, walking on the grass toward the office, where we each received a Certificate of Achievement with our name on it for the completion of the flight. Any concerns about safety had disappeared once we were airborne. Sabrina’s handling of the glider was smooth and seemingly effortless. She was attentive of my comfort, friendly and patient. I just wish I had been better able to enjoy my flight. Still it was a worthwhile ride and I would do it again.

Glide Omarama was about ninety minutes drive from Queenstown. Although instructions and training were usually provided in English, some of the staff speak German, French, Romanian, Hungarian depending on the season, Sabrina later explained by email.

There has never been a fatal accident on a trial flight in New Zealand, Sabrina replied when asked about safety. Adding, “Gliding is considerably safer than skydiving
or bungee-jumping.”

Sabrina, a native of Bavaria, Germany has a Masters degree in Environmental Engineering. Flying since she was 15 she had a German glider maintenance certificate, a winch driver’s license, and a New Zealand B Category instructor rating. She loves to fly vintage gliders, she said. At Glide Omarama she worked first as ground crew before becoming a year round Instructor. She loves cross-country soaring and has taken guests on flights over 800 kilometers long.

Our glider was about 15 years old, which she explained, is new in terms of a glider’s life (there are still gliders flying which were built in the 1940s). Children 12 or older were welcome on trial flights and to learn to glide. The company offered wheelchair access.

The company, owned by Gavin Wills, a pilot and former mountaineer, employed between 12 and 15 instructors. Development of the Omarama Airfield began in 1991 for the 1995 World Championships when a group of pilots led by Bill Walker transformed a deserted dust bowl into an irrigated airfield with grass, trees, hangars, tie downs, chalets and a campground. Omarama emerged from there. By the time I visited New Zealand there were two parallel runways, each 1.5 kilometers long, and four additional short landing runways.