Steps away from Notre Dame, a quiet foodie haven 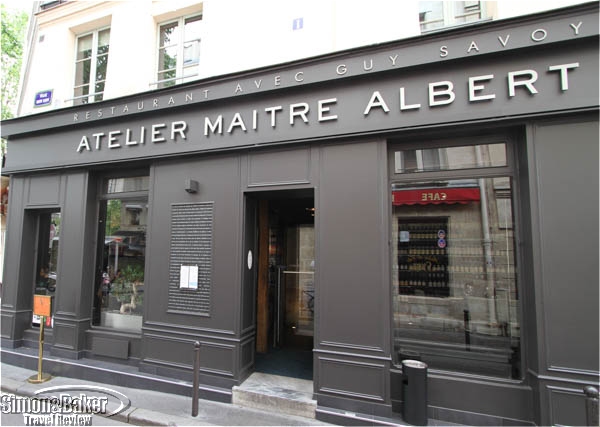 Despite its reputation as a culinary capital Paris, France is one of those cities where picking a restaurant at random may result in a memorable find or a disaster, and the price difference might be negligible. The more touristy the area the greater the chances of disappointment, so as a general rule I make a point of not going to unfamiliar restaurants in zones popular among visitors, especially in the vicinity of tourist magnets such as the Latin Quarter, Le Marais, Arc de Triomphe, Champs Elysees, and Eiffel Tower, for example. 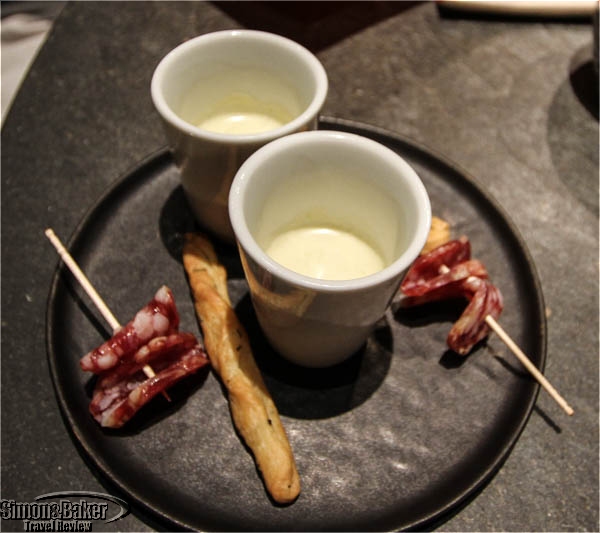 Our light bites as amouse bouche

One way to reduce the chances of a less than stellar expensive meal is to sample restaurants owned by or part of the portfolio of a well known chef. This has been particularly true when I have sampled the cuisine at one of the restaurants already. Such was the case of the Atelier Maître Albert
(1, rue Maître Albert, 75005 Paris, France, + 33 1 56 81 30 01, fax +33 1 53 10 83 23, www.ateliermaitrealbert.com, ateliermaitrealbert@guysavoy.com), part of the Guy Savoy food constellation. Prior to going there I had dined at Guy Savoy’s eponymous gourmet restaurant as well as Les Bouquinistes (see Latin Quarter restaurant nice neighborhood option) and Le Chiberta (see Le Chiberta, a restaurant find near the Champs Elysees), and had sampled the products of his new bakery outlet specializing in brioche. Most of those experiences had been rewarding so I was confident my meal at the Atelier Maitre Albert would also be worthwhile. 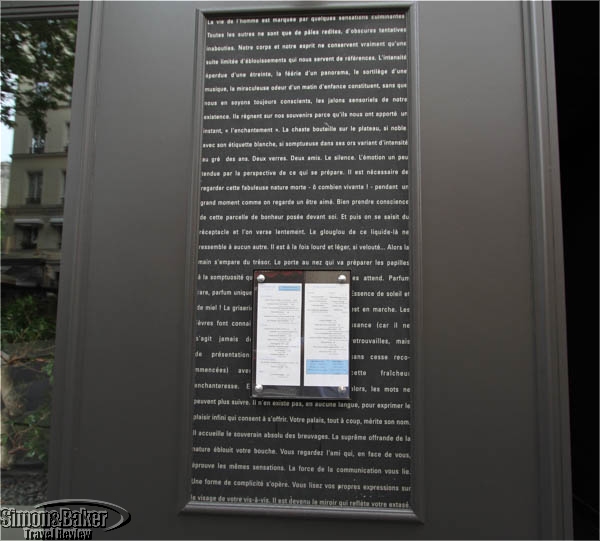 The menu was posted outside

Located at the beginning of a narrow street in the Left Bank across the Seine River from the famous Notre Dame Cathedral the restaurant was a pleasant surprise because while I had walked the neighborhood countless times I had no idea the restaurant was on that street, a 10 minute walk from my central accommodations. Except for the famed chef’s name on the exterior wall, the modern facade revealed little of the restaurant’s ambiance or its high quality comfort food. 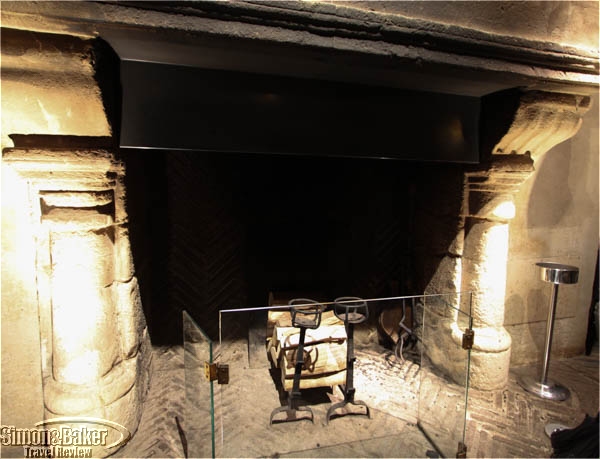 Our seats were next to a large fireplace

As soon as we entered a young man with hip bleached blond hair welcomed us warmly. Moments later, after handing over our rain gear, we were seated in armless chairs next to the unlit fireplace in the restaurant’s ground floor dining room. From our seats we had a generous view of the entire dining area and across to the open kitchen and its grills. There was also window side dining near the entrance with views of the street. 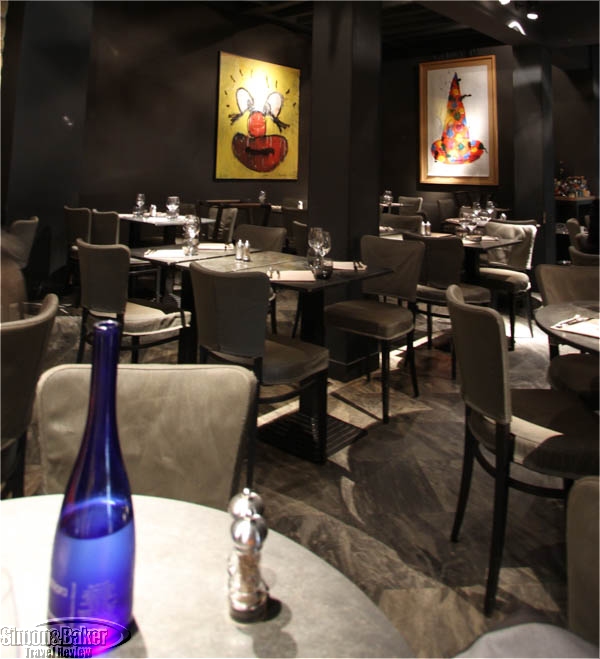 It took a few moments for our eyes to adjust from the bright midday exterior sunlight to the low ambient light indoors. The first decorative features we noticed were the familiar colorful clown themed paintings hanging on the back wall. Previous to that day we had last seen them at the Guy Savoy main restaurant. Since the restaurant had moved nearby and been redecorated the paintings had been transferred to their new home. Other salient decorative features were sleet gray marble tile, exposed beams, stone walls and track lights. It was pleasantly serene without being too quiet. 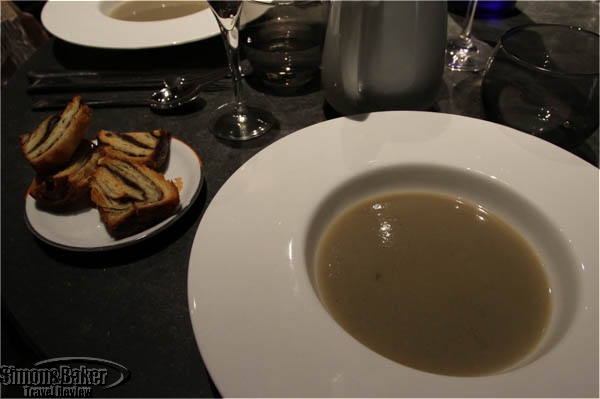 Artichoke soup and brioche from the Guy Savoy bakery

With our friendly English speaking waiter’s help we made our selections from the menu including a glass of wine to match our choices. We both had the Velouté de l’Atelier “en verseurse,” a light artichoke soup brought to the table in a pitcher and served with brioche. It reminded me of a similar soup I had tasted at the chef’s gourmet restaurant. For mains, my lunch partner had the Volaille fermiére du Maine (a quarter chicken portion) for one, a free range spit-roasted fowl dish with a side of mashed potatoes. He ordered a light white from the Pays d’Oc on our server’s advice. 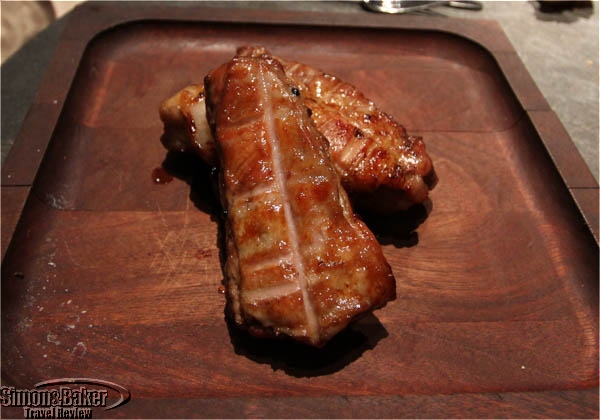 Special ribs still on the bone 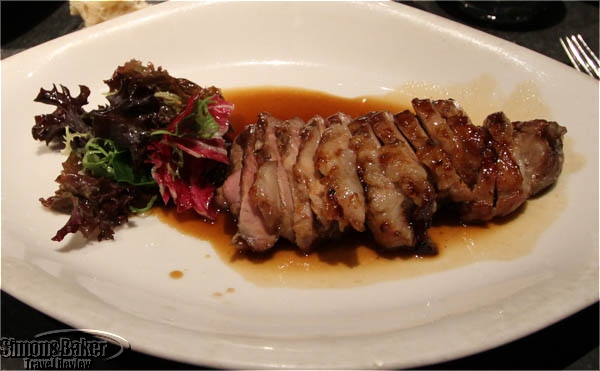 I had Travers de porc “marinés,” marinated pork ribs and a side of Gratin d’épinards champignons (mushroom and spinach gratin). The gratin was a favorite. Both mains were moist and tender with a broth like flavorful sauce. At my request, the kitchen staff had removed the bone from my ribs so they were ready to eat when they were served, although the server was kind enough to show us the ribs before they were deboned. I had a red from Bordeaux. For dessert, I had the Choco pralin-feuilleté, anglais-chicoré, two slabs of dark chocolate and crispy praline with a small dark chocolate ice cream ball. 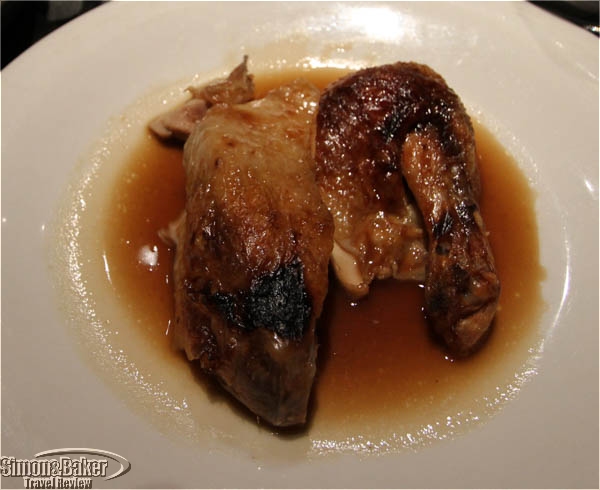 The chicken was served with a broth like sauce 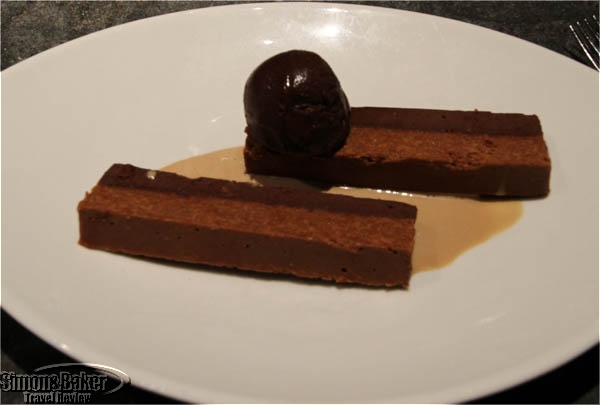 Overall, our comfort food style lunch experience was outstanding. Kudos to Guy Savoy and his collaborators Emmanuel Monsailler, chef, and Laurent Jacquet, manager and their staff. From the soup and salami amouse bouche to the dessert we enjoyed all our courses. The dishes were perfectly prepared and worth repeating. The service was attentive, helpful and friendly. As a bonus, the restaurant was in a central location and convenient to visitors and residents within and near the Latin Quarter. What more could we ask from a neighborhood restaurant?