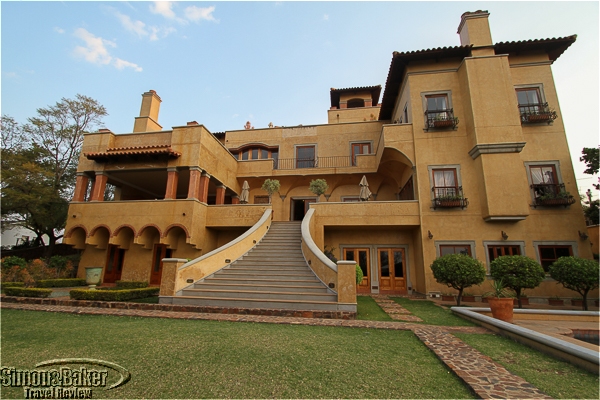 The Castello di Monte from the backyard

During my trip to South Africa I rode The Blue Train, a modern luxury vessel that journeyed several times a month between Pretoria and Cape Town and back. My train departed from Pretoria early in the morning (the luxury rail company boarding instructions indicated I should be at the Pretoria train station at 7:30 a.m.) which meant I would need to spend the previous night nearby or risk missing the train. At the same time, I knew traffic in the Gauteng region, where Johannesburg and Pretoria, two of the country’s major cities, are located, would be heavy at rush hour. 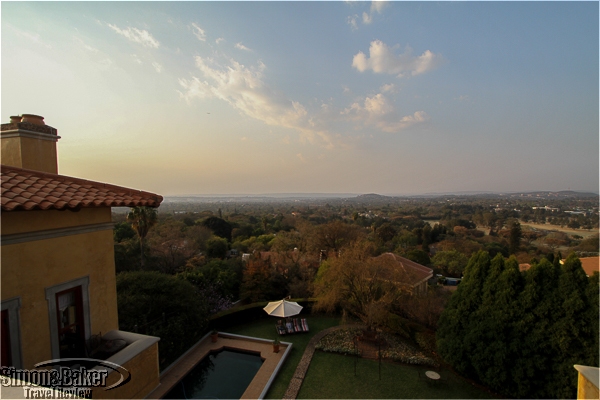 A view of my room on the left, the swimming pool and backyard in the foreground and Pretoria in the background

I wanted to spend the night before my departure close enough to reach the Pretoria station easily in the morning. At the same time, I sought a safe abode away from the busy and noisy central area of the Pretoria train station, and ideally somewhere I could have a pleasant dinner the evening before my rail adventure. 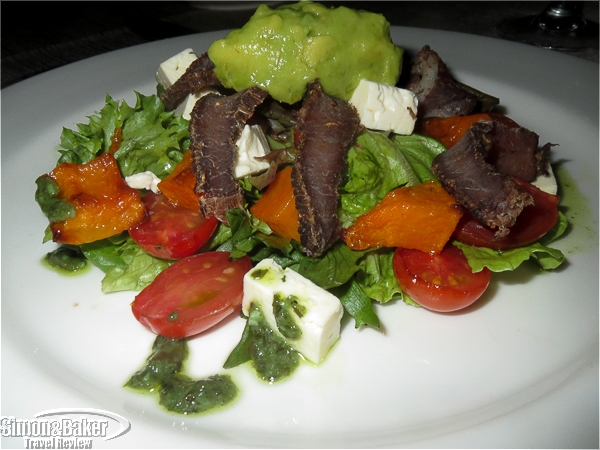 My biltong salad was delicious

Johannesburg had many fine options. The down side of staying there was that I would have to brave the congested morning traffic between the two cities. Plus, because of the distance to avoid a late arrival I would have to leave my hotel extra early. Pretoria, while much closer to the train station, had far fewer hotel possibilities than its larger sister Gauteng city. I was delighted when a colleague recommended the Castello di Monte, a Five Star Bed and Breakfast owned by Tilla and Pieter van Zyl and managed by their daughter Madeleen Jacobs. Established in 2004 the 3,300 square meter house had nine rooms ranging between 30 and 60 square meters in size within a single building, and employed 18 staff. 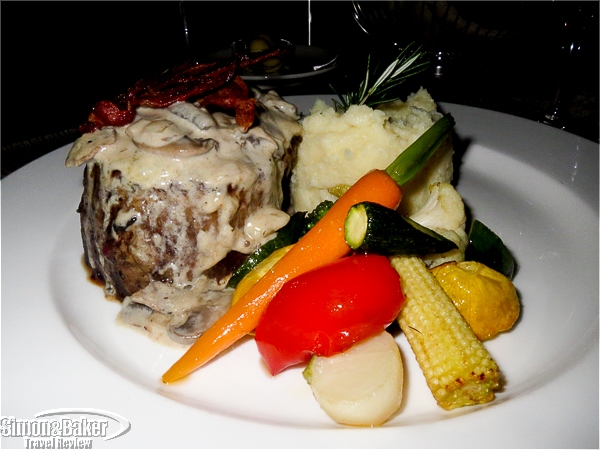 As soon as I visited the hotel website I knew it would be my first choice. Although the bed and breakfast was slightly further from the station than some of the chain hotels, the Castello di Monte offered a transfer to the train station for The Blue Train guests and the drive promised to be pleasant and relatively short (especially compared to the one from Johannesburg). 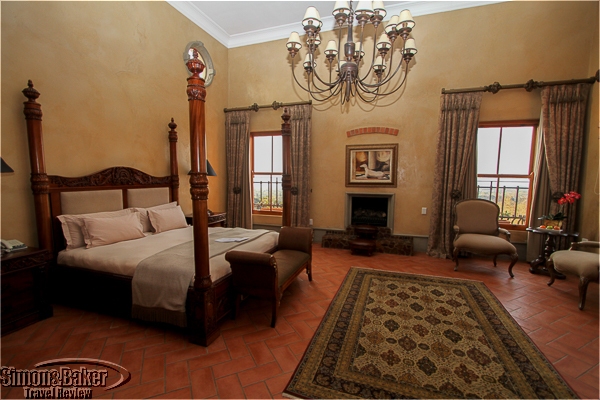 The sleeping area of my expansive Presidential suite

When I arrived at the Italian themed property I discovered it was much nicer than I had anticipated. An added bonus was that I had a chance to stay in the 158 square meter Presidential Room. One story up from reception via a pretty spiral staircase or a small elevator, it was unexpectedly large and well appointed. In addition to the bedroom, it had two large and complete bathrooms, one with a door-less shower and the other with a bathtub. It had a walk-in closet, window views of Pretoria and a small private porch with a view of the lawn. It also had high ceilings, a minibar, a large flat screen TV, and an oversize bed. 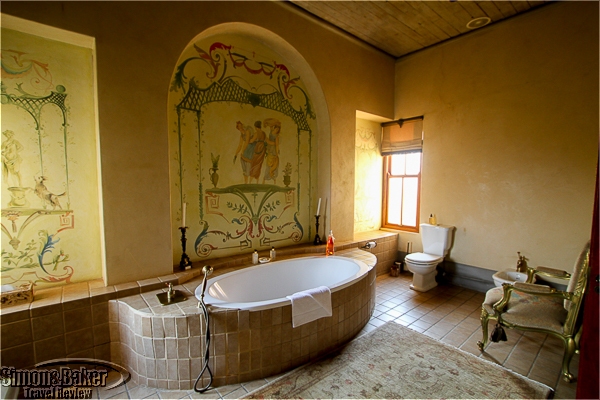 One of two spacious bathrooms with a large bathtub

The staff members I met, such as Pam at reception and Evans, one of the servers, were friendly and service oriented. Dinner, a tasty lovingly prepared meal, was served on an open terrace with expansive views of Pretoria. My satisfying three-course set menu dinner consisted of a Biltong (a South African dried beef) salad starter and a Steak with blue cheese and mushroom sauce, mashed potatoes, and steamed vegetables main course. For dessert there was Creme brulee served with a fig cracker. 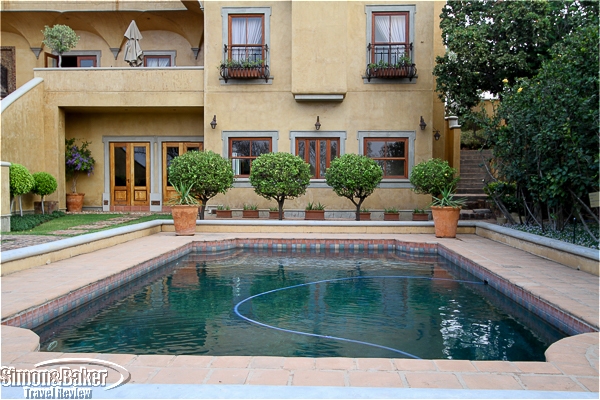 It was too chilly to swim in the pool

Although the Roman style charcoal granite pool looked inviting it was too cool outdoors to venture into the chilly water. Several guests relaxed poolside, but like me none went for a swim. From the rooftop the hotel had splendid views of the surrounding residential area and the city below. 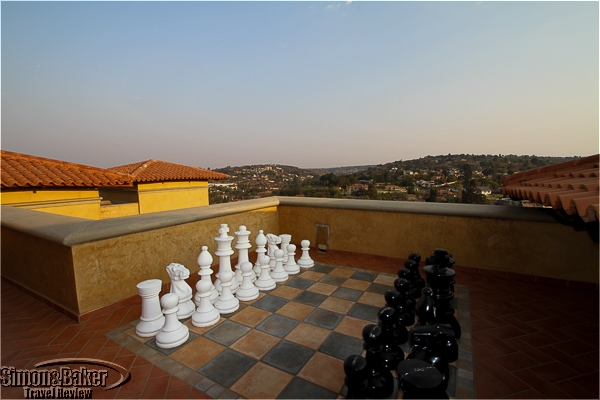 Outdoor chess with a view at Castello di Monte

I spent the night like an Italian queen, sleeping on the comfortable four poster bed and waking up rested when my alarm call rang. After a brief continental breakfast (a hot breakfast was available, but given the 15 minutes between the breakfast service opening and departure time I opted for a light meal) I climbed aboard the transfer van with four Americans also traveling on The Blue Train to Cape Town. 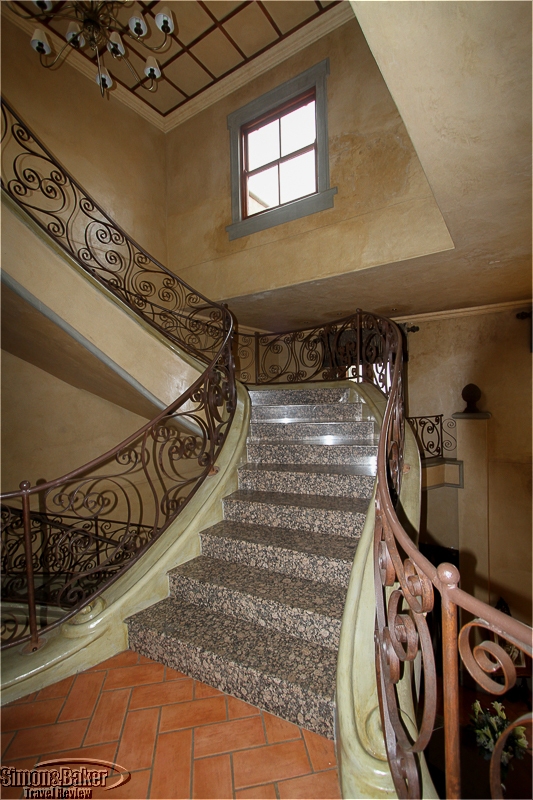 Should I return to Pretoria on a leisure visit the Castello di Monte (402 Arles Street, Waterkloof Ridge, Pretoria, 0181, South Africa, +27 012 346 6984, www.castello.co.za, info@castello.co.za) will be at the top of my list. I was pleased with my experience there I already recommended the bed and breakfast property to fellow travelers aboard the train as well as some I met in Cape Town.