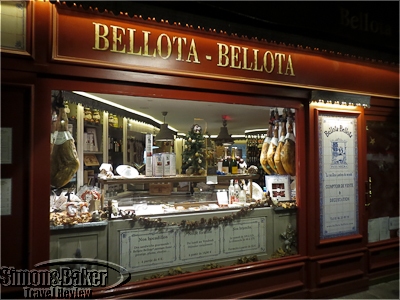 Bellota Bellota in the Latin Quarter (click photo to enlarge)

On a recent trip to Paris, France we ventured to Bellota-Bellota, a new gourmet shop with on site dining in the Latin Quarter (Bellota-Bellota Saint Germain, 64 rue de Seine, 75006 Paris, France, +33 1 46 33 49 54, www.bellota-bellota.com, aszabo@bellota-bellota.com). From the sidewalk we could see through a large display window. The distinctive azulejo tiles and hanging hams in the decor were a sign of the treasure trove of domestic and imported goodies housed inside. When we first arrived in between meal times we had the dining area and shop mostly to ourselves. Despite the touristy location there was a steady trickle of French customers picking up supplies to go. Such was the case with two gorgeous poodles who were as fond of the shop’s famed dry aged distinctive hams imported from Spain as their owner. 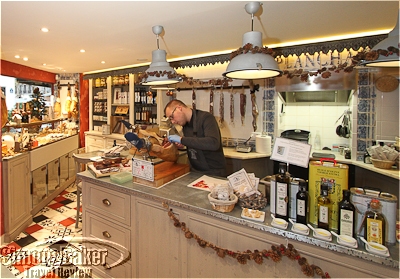 Watching the Bellota slicing is part of the fun

We relied on the staff’s knowledge and advice in our extended late afternoon tasting. We started with the shop’s seafood products. First, there were three varies of Tarama (a creamy spread made with roe), natural, lobster and truffle. We were lucky to be able to sample them all. The server explained they didn’t always carry the lobster Tarama. The wild Alaska salmon eggs were non pasteurized (though previously frozen). The sliced-by-hand Norwegian salmon, farm raised in an area with many currents, was memorable. Double smoked in Germany with elderwood it had a rich, well rounded flavor without greasiness. 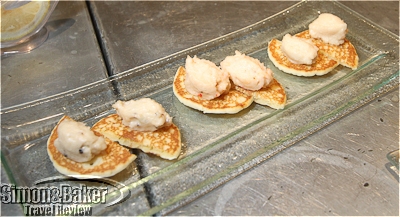 The three varieties of Tarama we tasted 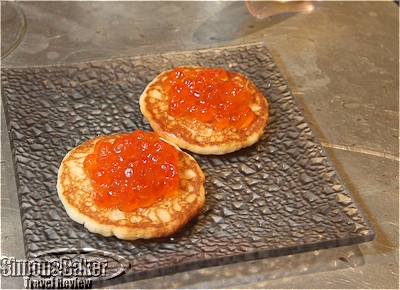 Spanish pork products were next.  Gijuelo, a 58-month chorizo, Fayet from Catalonia (from a Celtic pig), lomito (pork loin from the end of the filet), and lomo, pork loin aged 20 months and vacuum packed, were next. The Fayet, somewhat hard and aged, was flavorful. Although we enjoyed all of them the lomo was our favorite. They were served with a homemade tomato blend of French tomatoes, garlic, olive oil, and salt flavored with rosemary, thyme, basil and laurel. 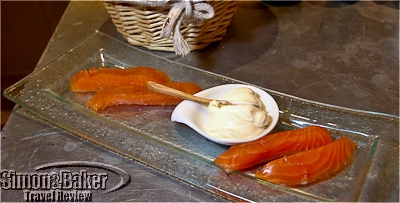 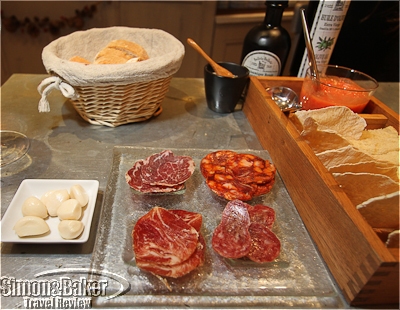 A volcano shaped dish designed by Bernardeau on Limoges porcelain was born from an idea by Phillipe Poulachon, the Bellota-Bellota founder. The plate had space in the middle for a votive candle to gently warm the fragrant bellota ham in order to enhance the flavor.  The warmth of the candle, a staff member explained, should make the fat of the ham translucent at 28 Celsius, the ideal temperature, and display the product to its best advantage. We sampled pata negra Grand Crus from the Guijuelo region of Spain and Bellota-Bellota from Huelva and Jabugo. The small portions disappeared as if by magic from the table. It was served with crystal bread without leavening. 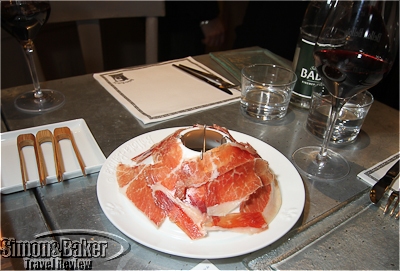 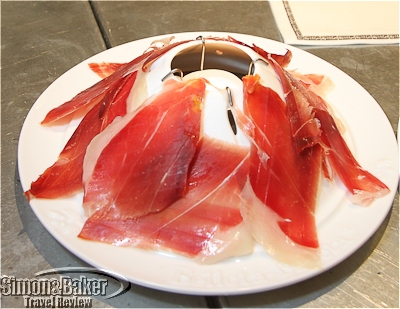 The bellota hams were selected from among the best produced in Spain, the shop specialist explained. The company trained its staff to identify ideal hams by using a horse bone, known as a cala, to pierce the seven veins in a pork leg. He demonstrated the process on one of the ham legs in the shop, inviting us to note the variations in the different hearty vein smells. Thirty percent of the original weight of the pork meat is lost to the dry aging process, he went on to explain. Some studies in Spain, he mentioned, suggest the oleic acid in the pork may be good for heart health. 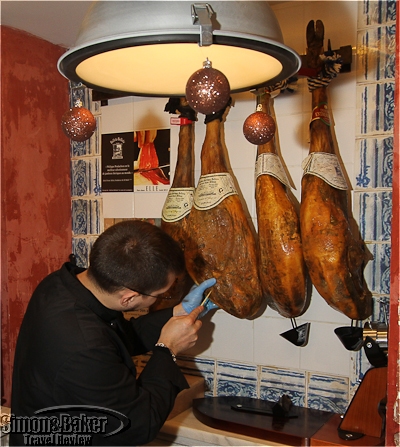 The staff demonstrated piercing the ham to check the curing process 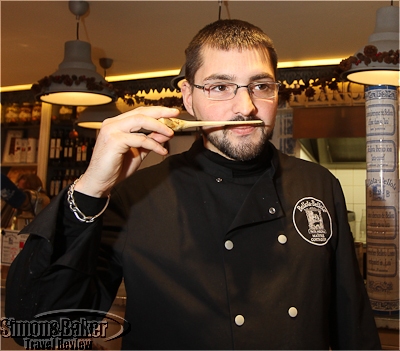 The scents of the ham from different testing points were intense

We also sampled delicious Pluma de Pata Negra rare grilled steaks with a heavenly scent prepared at the shop. They were made from frozen as only 600 grams of pluma were produced from each Iberico de Bellota ham, the staff person told us. They were tender and oh so flavor filled. They were served with Pimientos de Padron green peppers (also from frozen), and mashed potatoes with olive oil. 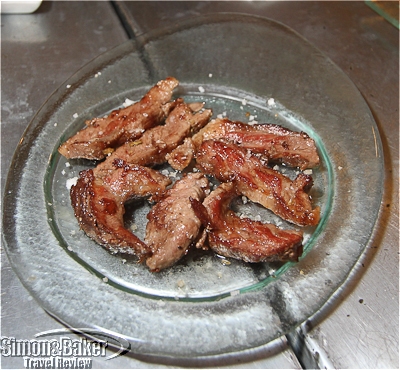 Sharp cheeses from Spain, that matched the powerful deli meats, closed the savory portion of our tasting menu. There were two types of manchego and a torta d’Extremadura from Salamanca. The strong Extremadura cheese, made with raw ewe’s milk, was aged 60 days and turned by hand daily. The cheeses were served with quince jam. 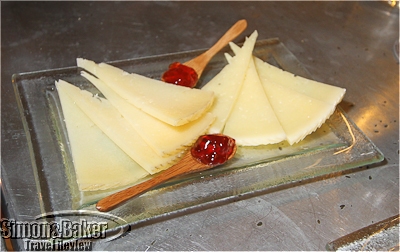 The staff selected Spanish wines to match our tasting: Pago Vallegarcia made from 100 percent vignior from Toledo, and a red Bassus Premium, a spicy blend of bobal, cabernet sauvignon, shiraz and petit verdot grapes from Utiel Requera from Valencia; a red 2007 Coma Vella (priorato) made with grenach, cabernet sauvignon, carinera, syrach from south of Barcelona. To complete our tasting, we had Spanish turrones (nougat) from Alicante and Girona followed by French Madeleine pastries made with honey harvested by handicapped artisanal makers from Les Cevennes, France. 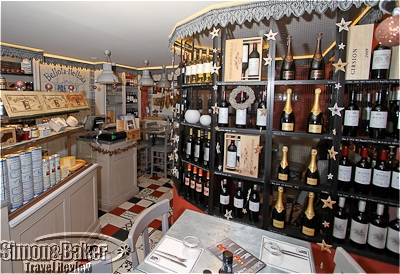 A selection of Spanish wines and champagne was available

From beginning to end the tasting was a delight. The cheeses, salmon, Tarama, and salmon eggs were free of preservatives. Our favorites were in no particular order the double smoked salmon back, the 20-month aged lomo and the aged Bellota-Bellota Grand Cru hams.