The art of making chocolate Alain Ducasse style in Paris 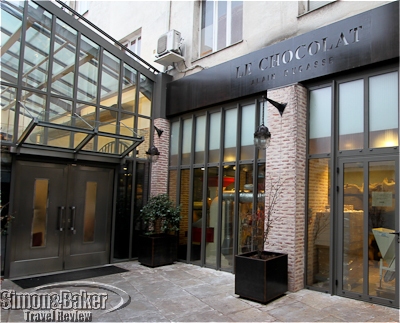 The courtyard outside Le Chocolat Alain Ducasse Manufacture a Paris

The heady odor of chocolate was the first thing I noticed as we entered the Le Chocolat Alain Ducasse Manufacture a Paris, Manufacture for short, on a commercial street in Paris, France. Located in one of the city’s lesser known (to tourists) east neighborhoods the Manufacture, 320 square meters in size, was a modern chocolate factory in the back and a gourmet chocolate shop in the front. We left our winter coats behind and donned special white coats to enter the inner sanctum where the master chocolate maker and a handful of young men worked in harmony. 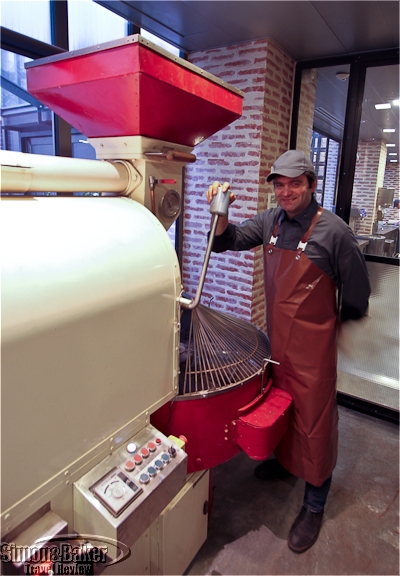 On a chilly morning, Nicolas Berger, the master chocolate maker, welcomed us warmly in the roasting room. For a short while he explained the process that transformed the raw cocoa beans from exotic locations across the globe into distinctive gourmet chocolates that stood out for their unique flavors in a city where a myriad shops sell fine chocolates. Prior to launching the Manufacture, Berger worked at Payard in New York City. He then joined the Alain Ducasse company as pastry chef at the Essex House also in New York. He later became executive pastry chef at the Restaurant Alain Ducasse at the Plaza Athenee hotel in Paris, France. Before that, he worked at Jean-Paul Hevin, Laduree, and Pierre Herme in France. 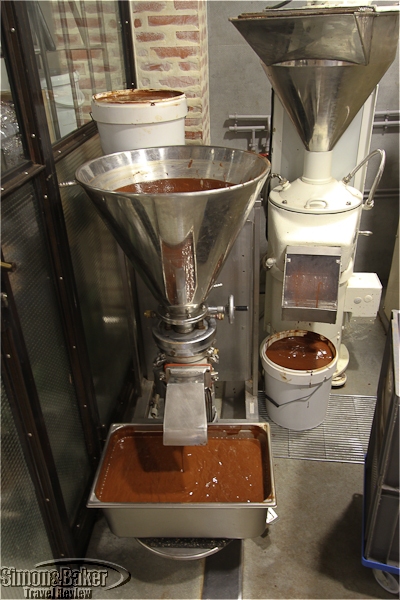 We watched chocolate being blended, smoothed and processed between roasting and the final product

He showed us the specialized equipment sourced with patience and effort and made in several countries: France, Germany, Italy and Switzerland. While we watched, he poured a container of 25 kilos of Madagascar cocoa beans into the toasting machine which processed 50 kilo batches at a time. A tiny amount of water was included in the process, he explained. The steam it produced killed any germs.

Bags of cacao beans marked with their country of origin stood like sentinels on the other side of the small room. A glass wall made it possible for customers to see the roasting room as they entered the courtyard that led to the boutique. 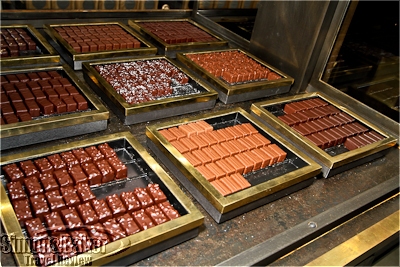 Trays of finished chocolates were displayed in the showroom

Following the roasting and separation of the shells and the beans in the roasting room the cocoa bean process continued in an adjacent area. The pure cocoa liquid went through several machines to be refined and blended with other ingredients, such as organic and biodynamic sugar from Brazil, and milk, depending on the outcome desired, into just the right consistency until eventually it was ready to be made into gourmet chocolate products. The initial refining process required about fifteen hours whereas the conching part of the process, which removed the thick gravely aspects, required at least twenty-four hours. 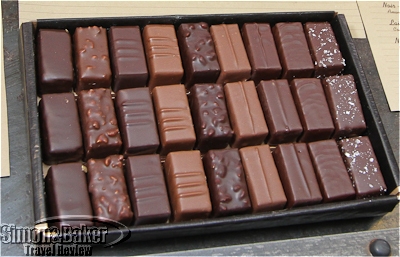 Fillings were coated, with great care, with a thin layer of chocolate

A variety of fillinging ran through an automated assembly line where each bite size morsel was coated with liquid chocolate. At the end of the line, staff removed the delicate product and prepared it for sale. Twenty-five flavors of individual chocolates were on offer. Production for December was expected to reach five or six tons. Nine staff, five in production and four in the shop, worked at Manufacture. While that might be a tiny amount in the chocolate industry where giant multinational companies produce huge quantities for commercial use and retail sale, it was the quality of the chocolate that we found impressive. We also appreciated being able to taste the classic single morsels of chocolate with filling in the place where they were made. More interesting at a personal level, was the variety of single source pure chocolates and how different the flavors where from each other. 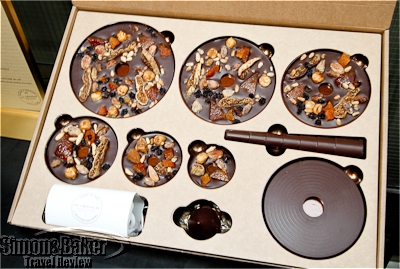 The shop offered a seasonal chocolate tree kit for the holidays

In the spotless shop, a central temperature controlled case with multiple glass covers that were operated by the staff was home to individual pieces of chocolate in a variety of flavors such as lime, praline, tonka bean and vanilla. As we selected the flavors we wanted to sample a staff person carefully removed one piece at a time and placed it on a ceramic plate. 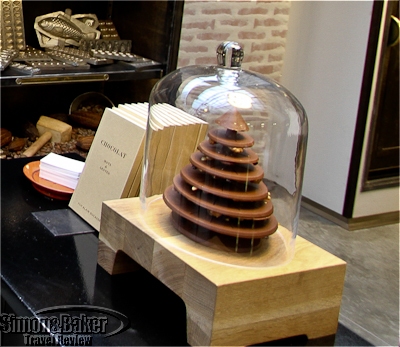 The tree was available in dark or milk chocolate. It could be assembled with the fruit and nuts facing up or down. 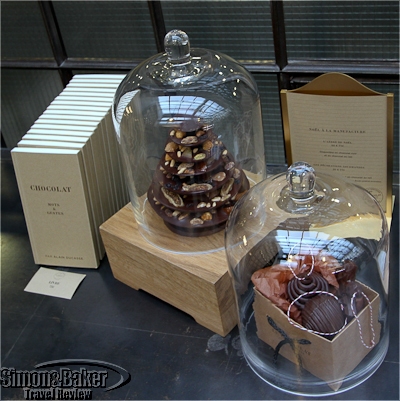 Along the left wall, there were sealed paper envelopes of single flavor chocolate bars from a variety of places of origin including Mexico, Peru and Venezuela, home of the well known Porcelana; Dominican Republic, Ecuador, Ivory Coast, Java, Madagascar, Sao Tome, Tobago, Trinidad, and Vietnam, all selected with care and emphasis on the quality of flavor (although the company made it a point of purchasing only cocoa beans harvested under fair labor practices), Berger explained with much enthusiasm. 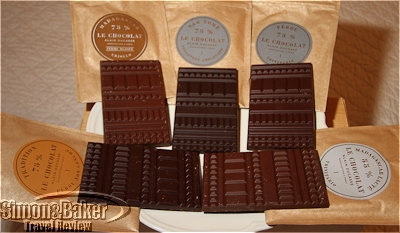 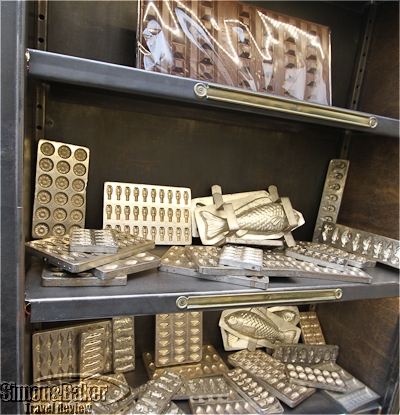 Chocolate and molds on display in the shop

While the Madagascar milk chocolate was smooth the dark chocolate from the same country had a hint of bitter and a slightly acid aftertaste. We thought there was a mild berry flavor in the Peru Trinitario which left a dry aftertaste. The Sao Tome had a rich, smoky flavor and a dry aftertaste as well. The non conche Peru bar was the most distinctive. Conche is a mixer and agitator that distributed cocoa butter within chocolate. Because that chocolate had not gone through the conching process it had a gritty texture. The flavor was full with dark and tart finish. One of us liked it especially while another liked it the least. 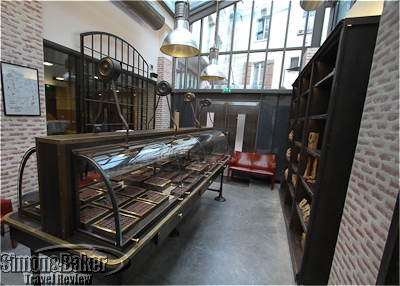 The nuanced flavors of the bite size chocolates are now fading in my memory. Fortunately, some chocolate bars survived the tasting. I will enjoy then while they’re still fresh and plan to revisit the shop at the next opportunity. When I’m in Paris again I’ll make a point of stopping by the shop to sample some of the flavors I didn’t have time to try and taste the ones I liked especially once again. As I think about it I liked all of the chocolate bar flavors so I may have to start from scratch. Le Chocolat Alain Ducasse Manufacture a Paris, 40, rue de la Roquette 75011 Paris, France, +33 1.48.05.82.86, http://www.lechocolat-alainducasse.com/en