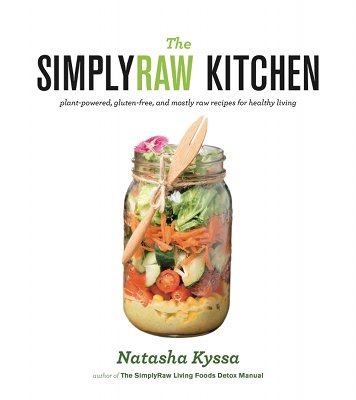 We’re always on the lookout for healthy, flavorful and nutritious recipes to expand our meal options. The SimplyRaw Kitchen (Arsenal Pulp Press, $21.95), an all-vegan, gluten-free 206-page softcover cookbook and lifestyle guide due to be released October 2013, by Natasha Kyssa of Ontario, Canada promised new ideas. 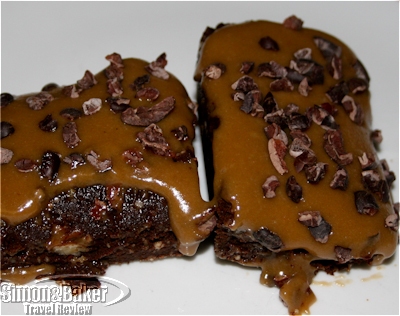 In the first quarter of the book she explains the reasons she prefers a raw vegan lifestyle, outlines the kitchen tools she uses and defines ingredients she favors in her recipes. The remainder of the book is divided into Beverages; Breakfasts; Soups, Salads and Salad Dressings; Pates, Dips, Spreads and Cheezes; Mains; and Desserts & Sweet Treats. 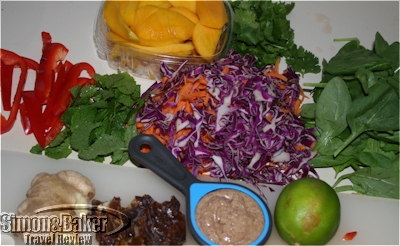 We sampled two recipes, one from the Mains and another from the Desserts & Sweat Treats chapters, with very satisfactory results and plan to try more. The first recipe we tried was for Vietnamese Salad Rolls with Dragon Dipping Sauce. While we had most of the ingredients the rice wrappers and tamari were challenging to find in our suburban town. In the end, a thoughtful neighbor shared her rice wrappers and we used soy sauce in lieu of tamari. I used shredded carrots to complete the red cabbage necessary for the recipe. We made the dish the same day we bought the produce. We chilled the six rolls and the bowl of sauce for about 45 minutes in the refrigerator to cool them down from our subtropical temperatures. The combined flavors of the rolls with the sauce were excellent. 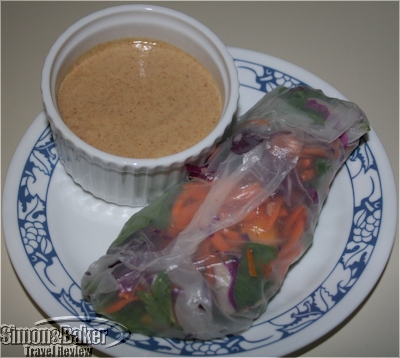 There was some leftover sauce which we sampled the next day in a simple salad of greens, tomatoes, carrots, cucumbers and red cabbage. While it was acceptable the sauce had changed; the garlic flavor was more pronounced as was the ginger, making the sauce too pungent as a dressing. In future we’ll plan to eat the sauce the day we make it. 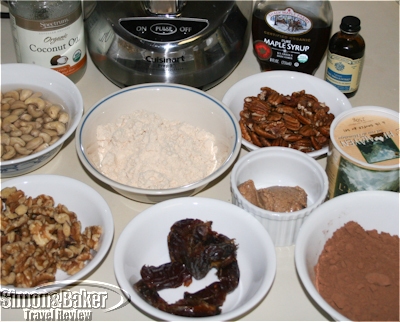 Ingredients for the Righteous Brownies with Caramel Frosting

The next day, we were in the mood for something sweet at the end of the afternoon. We had most of the ingredients for the Righteous Brownies with Caramel Frosting except the coconut flour which we procured easily. The brownie part, mixed in a food processor, still had some chunks when we molded it into the pan. The frosting, mixed in the blender, was smooth and liquid, easy to pour over the brownie. A few minutes in the refrigerator did little to keep the frosting from running. It was rich, creamy, crunchy (from the brownie chunks and the cacao nibs), chocolaty and mildly sweet. While not a replacement for oven baked chocolate and nut brownies the Righteous Brownies were surprisingly filling and satisfying. 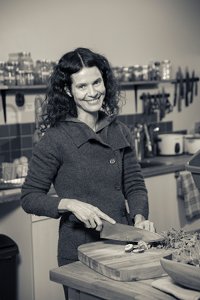 We are planning another meal of rolls as soon as we find some tamari. The brownies have been well received and we plan to continue sampling recipes.

Kyssa, who wrote the book with her mother Ilse, runs SimplyRaw, a healthy lifestyles consulting company, and SimplyRaw Express, a vegan restaurant in Ottawa, Canada. The recipes in the book, she says in the Introduction, are contemporary interpretations of traditional Eastern European comfort foods. She strives to guide others to achieve a healthy and wellness oriented lifestyle through workshops, her café, and detox program. A past speaker at TedX she also hosts professional seminars and workshops. Her first book, The SimplyRaw Living Foods Detox Manual, was published in 2009.