On my first night in Mexico City, Mexico earlier this year I had a contemporary Mexican dinner with small production mezcals and Mexican wines at the French Porfirian style home of Chef Monica Patiño. The house is exceptional, someone from Mexico City explained before we arrived. Built in 1916 in La Roma it is part of a past era and situated in one of the city’s most upscale neighborhoods.

The Body and Soul Refreshment Menu served at 8:30 p.m. began with El 19 cocktails on the first floor of the multi-level house with an inner courtyard. The refreshing and lightly sweet homemade beverages were a blend of Mano Negra, an artisanal mezcal, celery, cucumber, epazote (a fragrant Mexican herb), lemon and brown sugar, served in a short glass rimmed with salt, chili and crushed maguey worms. Delicious. 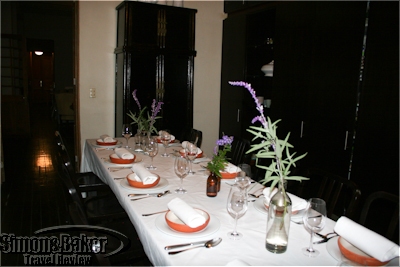 Three hors d’oeuvres were served with the green tinted drinks. The first two were so hot (my tolerance for hot dishes is low) I only managed a single bite of each, Tostadas de Guacamole, guacamole served atop a nacho like cracker, and Tostada de Ceviche Verde, a crunchy corn cracker with citrus marinated seafood. My favorite was the Panuchos de Cochinita, a handheld appetizer of savory shredded pork without chili heat and a good match for the mild tasting cocktail. 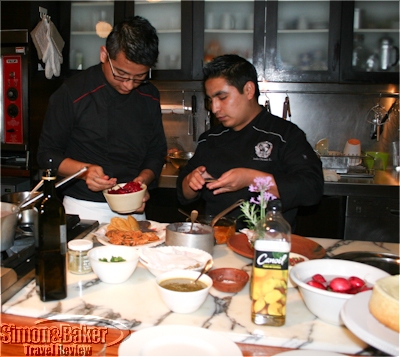 Ricardo Garcia, chef, Naos and Jesus, his assistant, in the kitchen

Prior to dinner, some of the members of our small group watched the staff prepared the pre-appetizers. Following cocktails, we were invited to an indoor dining room with a set table, past an open kitchen where the chef and her staff prepared the meal. Before sitting at the table with us, Chef Patiño, with the assistance of Ricardo Garcia, chef, Naos (owned by Chef Patiño) and Jesus, his assistant, prepared the meal. I especially appreciated her explanations about mezcal production and the preparation of the meal during the course of the evening.

For an appetizer the staff served Tamalito Costeño en Caldillo de Frijol, a tiny tamale in a black bean sauce made with corn, beans, chilies, raisins and almonds. The main course was an unusual interpretation of Pozole, a well known specialty Mexican dish. It was so unusual that several of the Mexicans in attendance were tasting the dish for the first time. A server brought each of us a bowl with Pozole Verde con Camarón, a green soup made ​​from seeds, corn, tomato, serrano peppers, shrimp and clams. Then he brought a platter with sliced radish and sardines to us the table to add to the pozole. There was one red wine, Ensamble Colina 2008, and one white wine, Emblema 2008 sauvignon blanc, on offer with dinner. I sampled the red and found it somewhat syrupy for my taste.

The dessert that night was my single favorite dessert during that Mexico City visit. Mixiote de Queso con Helado de Mezcal was a cheese filled filo pastry, with nougat, pumpkin seeds, atop a sauce of piloncillo (a raw sugar cane product), mezcal, and agave baked, fermented and distilled. The pastry itself was topped with mezcal ice cream which had powdered cinnamon crowning it. At the table, we were offered grated Parmesan cheese and sea salt to compliment the pastry and ice cream dish. My mouth waters at the memory. Mezcal Amores, family produced like the first one, was served with dessert.

Dinner at the chef’s home was by special arrangement. Chef Patiño has more than 34 years of experience in the kitchen. She began her career with an internship at La Hacienda de los Morales before attending L’Ecole de Cuisine de la Varenne in Paris, France. In 1978, she opened La Taberna del Leon in Valle de Bravo, Mexico. Eleven years ago, she established another La Taberna del Leon in honor of her first restaurant. Bolivar 12, serving Mexican cuisine with a Cuban influence, and Naos followed. In 2007, she became a consultant for Aeromexico. In July of this year, she taped Everyday Cooking with Mónica Patiño, a cooking segment on Utilísima, a Fox program in Argentina. Monica Patiño Marquez,  +55 52 0155 55 11 05 50, monica_patino@hotmail.com