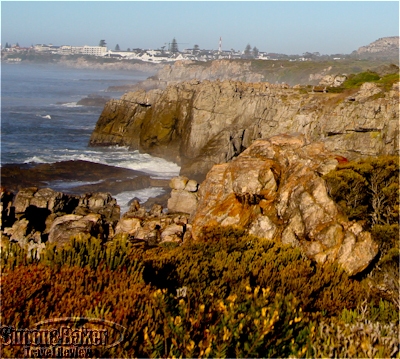 The cliff walk offered dramatic views of the ocean and cliffs

One of my favorite walks in South Africa is in the Western Cape. During our last visit to Hermanus we would walk the Cliff Path Nature Area daily for a couple of hours enjoying the stunning vistas and hoping to spot a whale, any whale even if it was not whale viewing season. Just as the sun was about to rise we would walk from Birkenhead House, a small hotel in Voelklip, west through the residential area of Kwaaiwater into central Hermanus on the marked and guarded (by  uniformed security company staff) path which hugged the coast for miles, part of the Fernkloof Nature Reserve. During our walks, we saw a variety of coastal plants and birds, dassies (said to be a tiny relative of the African elephant), teenage seals and unexpectedly two brides whales which, according to the townsfolk, were a rare sighting. 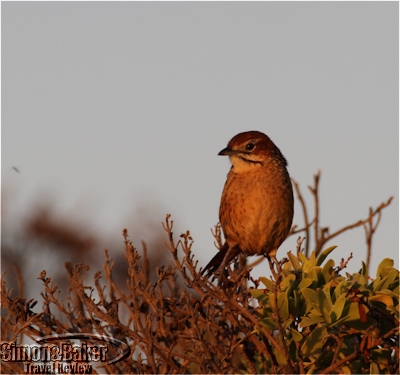 Shy little birds were out at first light

Occasionally small markers would point the way and large IFAW (International Fund for Animal Welfare) signs would provide information about the flora and fauna of the area including, of course, the whales that Hermanus is famous for nationally. In addition to the signage there were rubbish bins and indications that someone in the municipality cleaned and managed the path on a regular basis. We also noticed designated parking areas at various places that intersected the walkway. 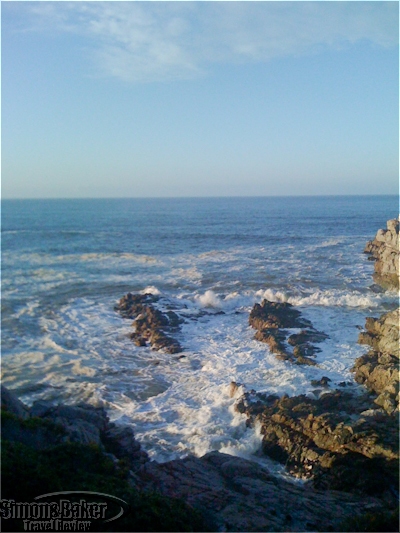 The waves constantly smashed into the rocky islands and shoreline 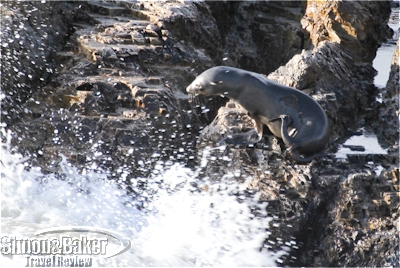 Seals climbed onto the rocky islands

The path passed steps below the rear terrace of our hotel and continued past Hermanus along the coast. We found it ideal to depart just before sunrise. Earlier than that and it was difficult to see the unlit path clearly, risking a twisted ankle or fall, and loosing out on of some of the beauty of the scenery for lack of light. Much later than sunrise was less worthwhile in part because the bird viewing and photography light were best early in the morning. From a comfort perspective as the sun emerged the light quickly became harsh and, although the ocean breeze was pleasant, the summer sun was punishing causing us to tire prematurely. 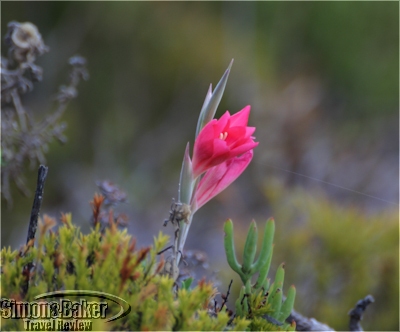 Along the way, benches were scattered at strategic spots where we could stop to enjoy the sea views. From the cliffs we could observe the crashing waves, copious quantifies of sea kelp, a variety of birds and coastal views of the upscale area. Adjacent to the walk there were beautiful houses in varied styles and sizes and as we neared the town there were some small buildings too. 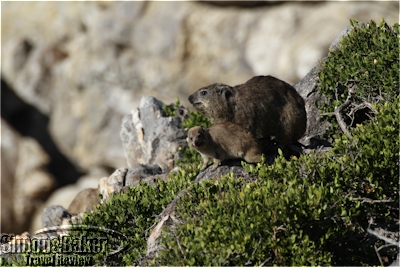 A dassie family perched on the rocks

We often crossed paths with locals out for a walk or jog, sometimes in the company of their unleashed dogs. Most of the paved walkway was built within a natural area surrounded by greenery and flowering plants passing through beaches, up cliffs and across bridges. There was a less attractive segment that veered inland on a sidewalk for a few minutes along the well trafficked main road before returning to the waterside and reaching central Hermanus. On Marine Drive, in the central part of town and across the street from the bay, we discovered Yves’s Pudding & Pie (87 Marine Drive, +27 082 924 0920), an informal spot to stop for a quick savory bite and cold beverage. We especially liked the pies.