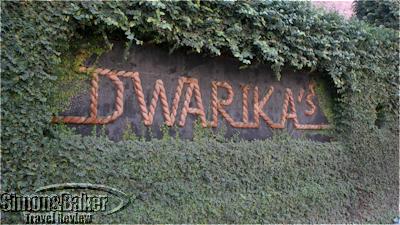 The entrance to Dwarikas

To reach Nepal from the United States east coast I traveled many hours with several stops along the way. When I arrived, the sweltering Kathmandu airport seemed chaotic and on exiting I, at first, missed my guide in the sea of unfamiliar faces. Narrow city streets shared by all manner of vehicles honking intermittently and livestock provided my first impression. I was excited to have secured accommodations at my first choice of the bustling city’s luxury hotels. For my arrival day the hotel had been fully booked until a last minute opening made it possible to secure a reservation for my entire stay in Kathmandu. 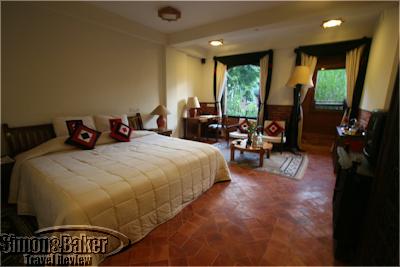 My first room had a view of the pool 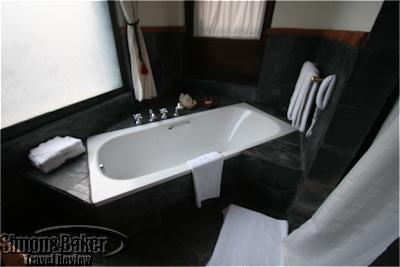 My bathtub at Dwarikas

In my sleep deprived and jet lagged state little enthusiasm to explore remained and I desperately wished for a clean and quiet place to call my own, at least for a few hours. That was not to be the case, at least not right away, as my room was not ready, literally. Workmen were putting the finishing touches on the newly constructed room (and building) assigned to me at Dwarika’s Hotel. One of the staff was kind enough to notice that I was tired and offered a temporary solution, a room where I could rest for 90 minutes until mine became available at 6 p.m. 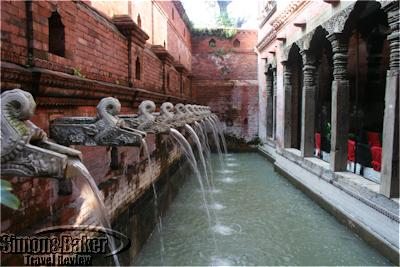 Fountains in a courtyard of the hotel

My rooms (I stayed at two rooms. At the staff’s suggestion I was relocated from my original room after the first night due to the loud sounds of construction in my building) were handsome, spacious and comfortable with modern amenities like a mini bar and internet access (for a fee). The breakfast buffet offered a variety of local and international selections. I especially enjoyed breakfast and opted for fresh fruit and the Nepali items like cheeses and pastries. 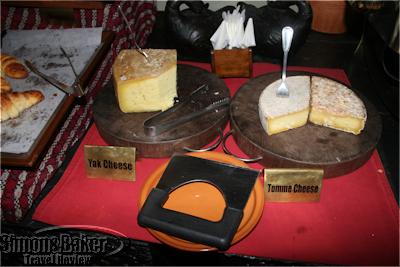 There were Nepali cheeses at breakfast 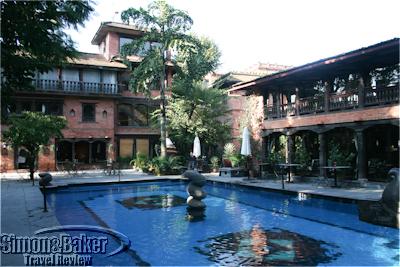 The Dwarika’s pool was adjacent to one of the restaurants

One night during my stay I had dinner at Krishnarpan, the hotel’s gourmet Nepali restaurant. After removing my shoes at the entrance of the restaurant there was a brief ceremonial “hand washing” before I was escorted across the wood floor to a ground level table. The candlelit room was decorated in wood and red tones. Prettily dressed staff ladies who spoke some English looked after guests. 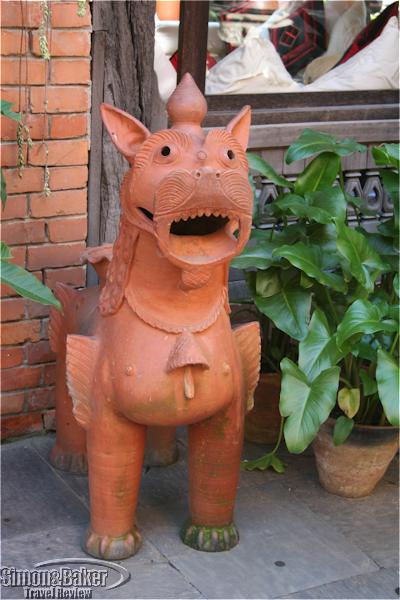 A sentinel in the common areas 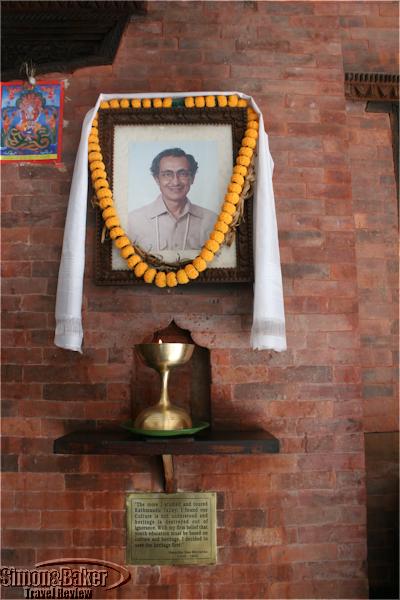 A special area was dedicated to the founder of the hotel

Named for Dwarika Das Shrestha, its founder, Dwarika’s Hotel in Kathmandu was outstanding for its combination of luxury features and facilities including a spa, heritage design, well appointed rooms, service and foodie oriented offerings. As I traveled around Nepal I realized how special Dwarika’s was and missed it. 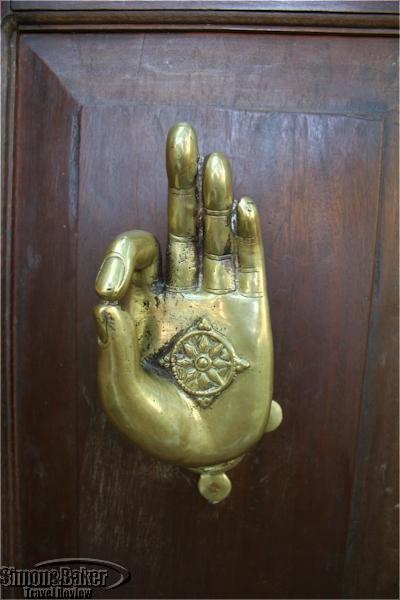 One of the many decorative touches

In addition to the architectural and artistic design features, including original thirteenth century artifacts and replicas, which lent the urban hotel a historic and cultural air I enjoyed Dwarika’s for the understated casual luxury, safety features and delicious food. Should I find myself in Kathmandu again this would be my first option for accommodations. Dwarika’s Hotel, P.O. Box P.O.Box-459, Battisputali, Kathmandu, Nepal, + 977-1 4479488/ 4470770, fax + 977-1 4471379/4478378, http://dwarikas.com, info@dwarikas.com