My week in Dominica 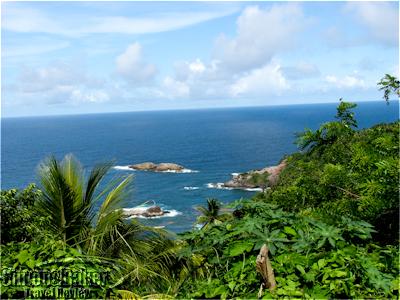 Dominica is lush and tropical

For most people thoughts of a Caribbean island stay bring forth visions of a vacation spent lazying on powder white sand beaches, gazing at turquoise waters and drinking rum punches served beachside with cute paper umbrellas. One of the reasons I liked Dominica was because it was, for the most part, devoid of such attractions. The highlights of my week long visit to Dominica, a lush green underdeveloped island, without luxury or chain hotels, sandwiched between Martinique and Guadeloupe in the eastern Caribbean, were centered around the island’s natural landscapes and beautiful views. 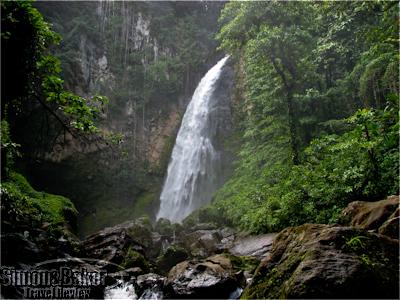 With the help of Justine, my guide from the Jungle Bay Resort & Spa, I hiked to Victoria Falls

For the active minded there were waterfalls, lakes, hiking paths, and hot springs to discover. As a nature lover I liked the possibility of spotting indigenous fauna and exploring the greenery within hundreds of miles of hiking trails that traversed the island. During my off season visit in addition to hiking, I visited waterfalls, a beach, a gorge, lakes, and rivers. One night after dinner at the pretty Rosalie Bay Resort, I was lucky to see turtle hatchlings crawl from the beach to the Atlantic Ocean. 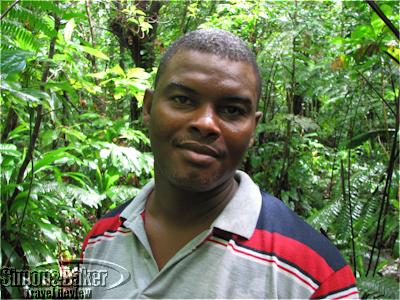 With the services of Kurnel Simon, a native guide and driver, (Transcendent Tours 3222 Canal Hill, Massacre, + 767 449-3969, kurnicb5@hotmail.com) I saw some of the island’s best known attractions. His patient demeanor, excellent driving skills (driving, on the left along narrow two lane roads, required a sportsman’s attitude in Dominica where many of the roads were under repair or in need of repair) and can do attitude enhanced my experience. Because it was off season the island was pleasantly quiet. 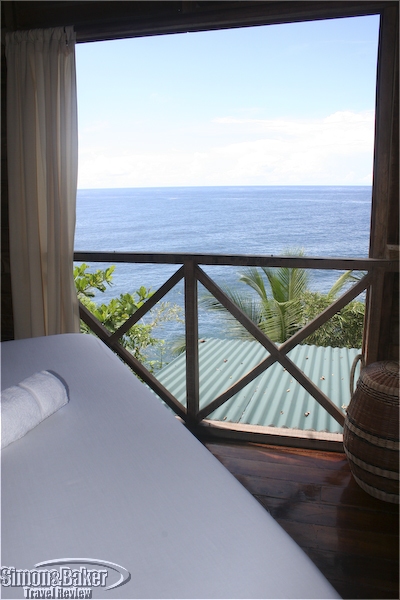 The spa at Jungle Bay looked out on the Atlantic Ocean

In terms of accommodations, I divided my time between the east and west coasts on the southern end of Dominica. First I stayed at the Jungle Bay Resort & Spa at Pointe Mulatre. Although there were many things I enjoyed at the ocean front hill property the one that will stay with me the longest was the sound of the pounding surf from the comfort of my non air conditioned room (the lack of noise from an air conditioner made it possible to hear the sounds of the surf clearly), poolside and at the water facing restaurant. 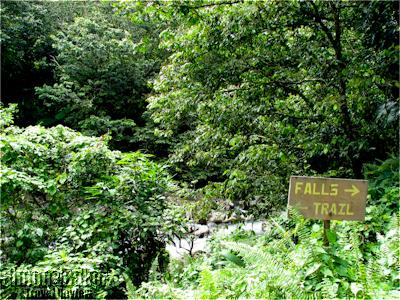 There were many hiking trails in Dominica

Justine, a native of a nearby village, was my guide on a four hour hike to Victoria Falls organized by the Jungle Bay staff. Although the hike tested my resolve more than once and served to showcase Justine’s patience it was a worthwhile way to discover that part of the island. We encountered no souls during the hike and the only sounds we heard were those of nature, the river and the waterfalls. 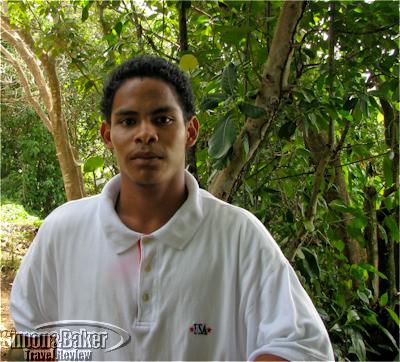 To reach the falls, it was necessary to traverse through natural trails, mostly unmarked and often slippery, through pebble and boulder strewn areas, and cross the Victoria Falls River on foot numerous times through strong currents that reached waist high more than once. I fell multiple times although the only major injury was to my pride. Thanks to Justine’s kind nature and our joint perseverance we made it to the edge of the falls (the rocks at the end segment were too steep except for billy goats in human guise and Justine) and back. 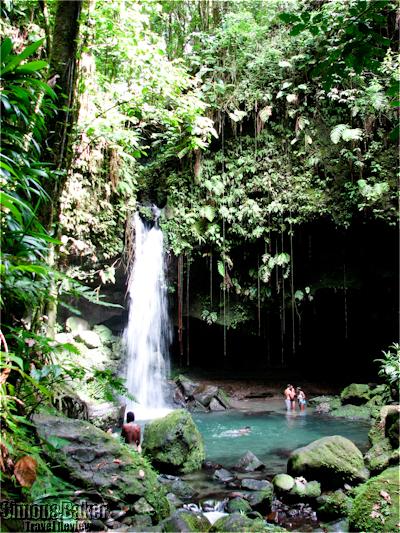 The Emerald Pool was a popular swimming and tourist destination

The next day was dedicated to the Emerald Pool and the Carib Cultural Village by the Sea within the Kalinago Barana Aute (Crayfish River, Carib Territory, +767 445-7979, fax +767 445-7533, www.kalinagobaranaaute.com, kbamanager@cwdom.dm) on the eastern coast of the island. Sunday was consumed with tours of the Cabrits National Park and the scenic Indian River followed by a drive through Portsmouth, the second largest town on the island, and a hunger satisfying beachfront lunch at Le Flambeau Restaurant at the Picard Beach Hotel on the northwest corner of the island. I took a moment to walk out on the dock in front of the hotel and made a mental note to return to that part of the island if ever I had a desire for an understated beach with clear water. On our way south to Roseau, the capital where I would stay for the remainder of my visit, we drove along the scenic coastal road. 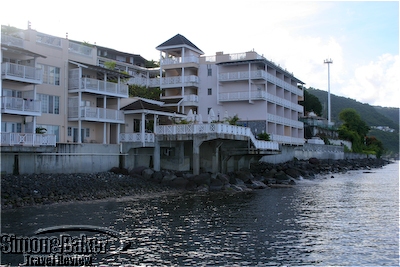 The Fort Young Hotel is on the water

After checking in at the waterfront Fort Young Hotel in the heart of town, I had an early dinner. The following day, I visited the lovely Trafalgar Falls, the Freshwater Lake and Titou Gorge. Mother Nature scheduled nonstop rain all day, helping to keep the island verdant. Because the Lake was enveloped in thick fog and it was chilly we minimized our time there. We carried on with most of the itinerary although we discovered Screw’s Sulfur Spa, the last stop for the day, was closed that week. We attempted to visit another hot spring facility at the last minute with little success. 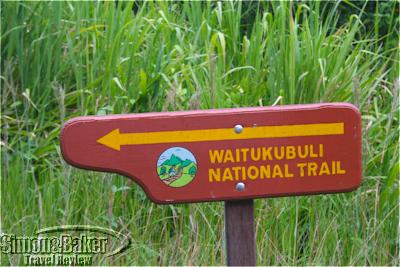 One of many Waitukubuli National Trail signs

The Waitikubuli National Trail was the island’s claim to fame for hiking. A 3.5 hour hike of Segment 1 of the Trail from Scotts Head to Soufriere was scheduled for the next morning. We were slightly delayed due to some difficulty locating my hiking guide. After collecting him at a nearby village Kurnel Simon dropped us at the beginning of the hiking trail and we set off on the “easy” hike. Although I felt pleased with myself at the end of the hike it confirmed what I suspected following the Victoria Falls hike: that what the Dominicans described as an easy hike would be considered challenging or difficult for me and most of the hiking aficionados, save the most fit and hard core, I know. 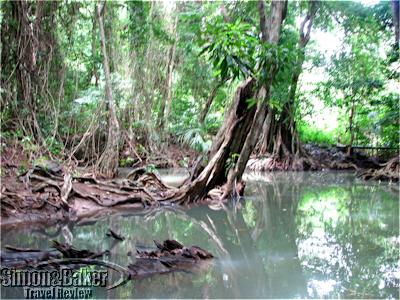 Snorkeling the next morning was canceled at the last minute by the snorkeling company. Since we had little time to make alternate plans before the afternoon whale watching excursion we visited the botanical gardens and drove up the hill to enjoy a panoramic view of Roseau. 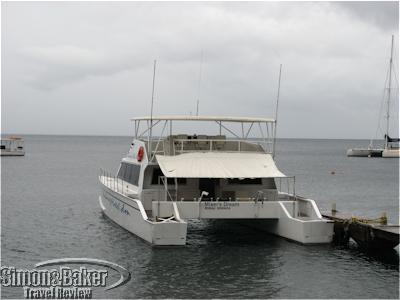 A vessel of the Anchorage Whale Watch & Dive Center

We went whale watching with Anchorage Whale Watch & Dive Center (The Anchorage at Castle Comfort, P.O. Box 34, Roseau, +767 448-2638, fax +767 440-2639, www.experience-dominica.com). After a safety briefing and discussion on whales and dolphins at the hotel where the company operates its tours, 14 of us, 11 passengers and three crew members (Captain Francis Charles, Dave Fabien and Eddie Joseph), went aboard the Miser’s Dream. The 60-foot catamaran motorboat built in 2000 and licensed for a maximum of 50 passengers was comfortable and spacious. Although we struck out on whales (which they see 80 percent of the time, according to the crew) we were delighted to come across spinner and spotted dolphins, a less common find in those waters. After motoring north and south along Dominica’s west coast some three miles from shore and spending 90 minutes under gray and heavily overcast skies we returned. 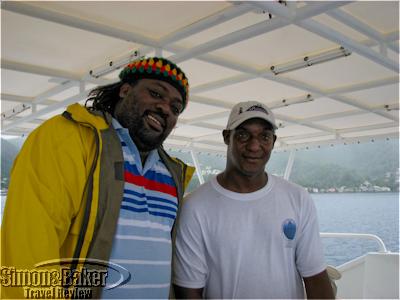 Crew members aboard the Miser’s Dream

Discovering the island’s natural treasures drew me to Dominica for the first time. Its stunning natural scenery, off the beaten track unspoiled character, genuine locals, simple organic meals and the possibility of discovering more of the Nature Island’s hidden beauty including some water attractions like snorkeling, diving and a second try at whale watching would draw me back.