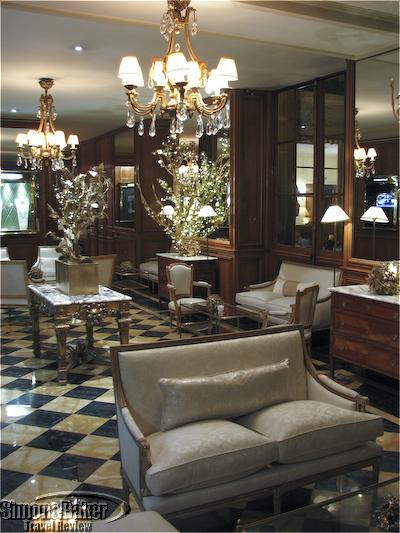 Location, location, location. There is much truth to the saying in a city like Paris, France. Being in a good neighborhood means easy access to many of the attractions that make Paris one of the most alluring cities in the world.

From a tourist perspective the Place de la Concorde is a great location. While the Place itself is attractive it offers the added advantage that within walking distance or a short taxi ride from the Place there are many tourist points of interest like Tuilleries Gardens, Rue de Rivoli, Louvre Museum, Place Vendome, Place de la Madeleine and Champs Elysees Avenue as well as shopping venues and gourmet restaurants. 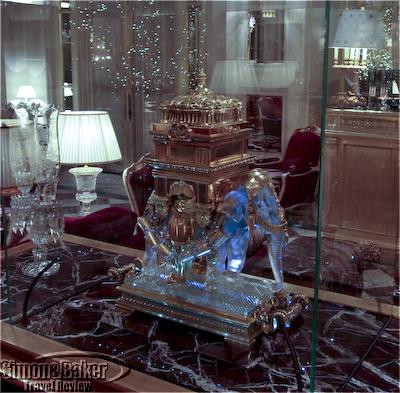 The Baccarat crystal elephant in the salon outside Les Ambassadeurs

On the Place, the Hotel de Crillon, part of a project commissioned in 1758 by Louis XV, became a private residence and was converted to a hotel in 1909. Over time the hotel has been the temporary home of United States Presidents Herbert Hoover, Theodore Roosevelt and Richard Nixon, Emperor Hirohito of Japan, Reza Shah Pahlavi of Iran, King George V of England, King Juan Carlos and the queen of Spain, Madonna, and Elizabeth Taylor among others. The historic building is to this day a luxury hotel. We stayed there during a holiday trip to the City of Lights.

For those who need to combine business with pleasure the hotel, located across the street from the United States Embassy, is in central Paris. Although the facade was under renovation and there was scaffolding covering the front of the building, inside there were many features that made the hotel worth a stay for business and leisure travelers. Our suite had a living area with a desk that was convenient for personal and business meetings and there was excellent internet connectivity for both of our computers. 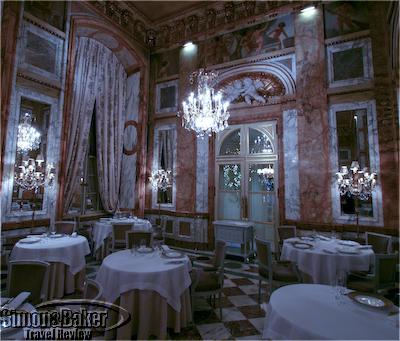 The dining room at Les Ambassadeurs

Over the years the marble filled historic building has been well maintained. Our spacious and handsome Presidential Suite looked onto Rue de l’Arcade and a building that may have been part of the embassy complex. We liked the well known entrance from the Place de la Concorde and another more discreet entrance on Rue de l’Arcade leading to Rue Saint Honore, a popular shopping street. As guests we had access to a fitness center, two restaurants and a bar within the hotel; we could also walk for exercise and dine at one of the myriad restaurants within a short distance of the hotel. 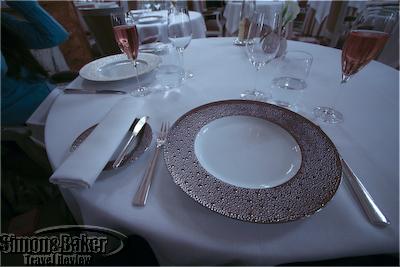 A place setting at Les Ambassadeurs

For years Les Ambassadeurs, the hotel’s gourmet restaurant, has stood out among the thousands of dining venues of the city. Its beautiful dining room and prized location on the Place de la Concorde have been among its attractions along with talented chefs and capable restaurant staff. During our stay at the hotel we dined at Les Ambassadeurs, which had undergone a change in management and chef, to rediscover the restaurant. 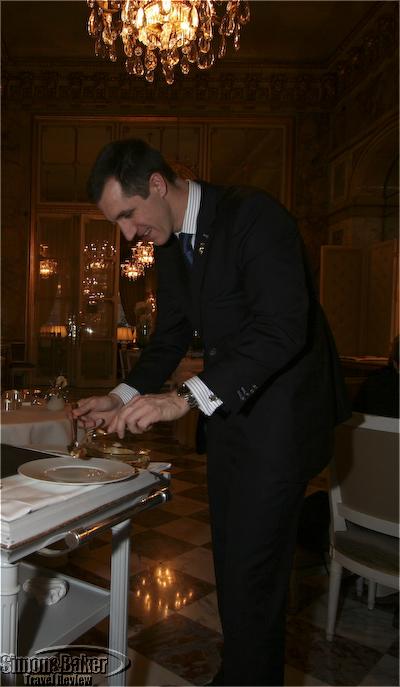 We were pleasantly surprised to see Pierre Jung, the new manager and a familiar face. We knew him from his time at the well known Senderens restaurant in the nearby Place de la Madeleine. Christopher Hache, the promising new young chef, who we met briefly that day, also had experience at Senderens (and as it was formerly known Lucas Carton). Our delicious and well served tasting menu was a success. We plan to return to the restaurant when next we are in Paris. 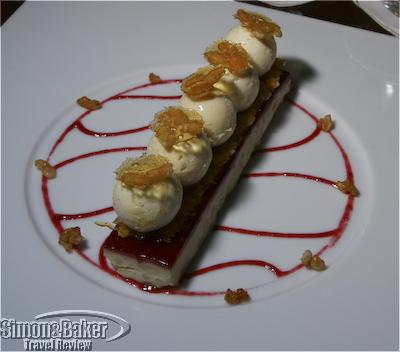