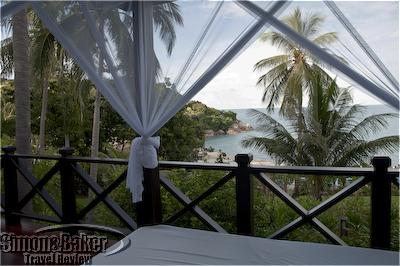 The terrace overlooked the gardens and the beach

The late Akorn Hoontrakul, one of Thailand’s prominent hospitality executives, first caught sight of The Tongsai Bay from the sea in 1985 and by his own admission immediately fell in love with it. Koh Samui (or simply Samui, as the locals call it) was still an isolated island community off the east coast of Thailand then. Its economy was based on subsistence agriculture and fishing, with coconut as the main cash crop. Tourism accommodations were limited to clusters of beach shacks for the adventurous back-packers that were beginning to spread through the region.

Soon, Akorn had purchased the land and set out to turn The Tongsai Bay into the first five-star resort on Samui. A dedicated nature lover, he personally oversaw the planning of the property to ensure that it would respect the natural beauty of the site. The Tongsai Bay opened its doors in 1987 and remains to this day the secluded luxury retreat spread throughout a lush amphitheater-like hillside overlooking the waters of the Gulf of Thailand envisioned by its founder. 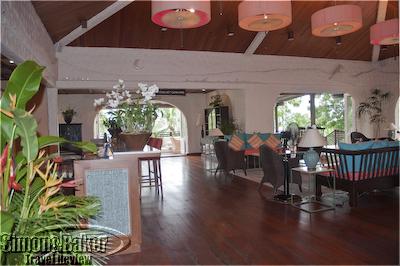 Samui as a whole, however, has not fared so well. With its tourism industry booming over the past decade, the island is now home to 55,000 inhabitants, and its tourist population can peak to well over 150,000 at the height of the season. Accommodation alternatives from upscale beach resorts to inland budget hotels along with eateries, shopping malls and support industries have grown exponentially. All of which has grievously strained the fragile ecosystem of this once remote 88 square mile (235 square kilometer) tropical island. But building on the environmental legacy of Akorn Hoontrakul, his son Thanakorn, and daughter in law Saisiri, the current owners of The Tongsai Bay, implemented the staunch conservation practices required to address 21st century ecological challenges. 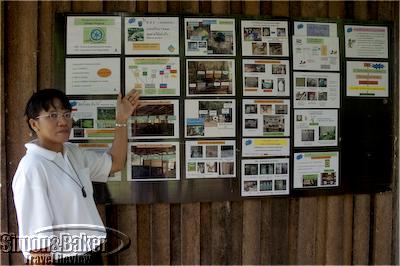 As early as 2003, they initiated the Green Project for their property. This was a far-reaching approach to the main environmental issues of the island: waste management, chemical use minimization, flora and fauna conservation and energy saving. Comprehensive policies and procedures were elaborated and strictly enforced at The Tongsai Bay, complemented by an extensive education program to build environmental conscience among the staff. Under the leadership of Jultamart Tongphauk, an environmental expert who holds a degree in environmental engineering from Khon Kaen University in northern Thailand, the project’s mission is to preserve the balance among humans, animals, trees and the environment on the property and within the community at large. Community service participation is one of the tenets of the Green Project.

The Tongsai Bay owners have contributed by donating to the island conservation land originally acquired by Akorn. Other activities range from supporting green education within the island’s public schools to reforestation of its wooded and mangrove areas. The Tongsai Bay also supports various local, national and international wildlife protection organizations. 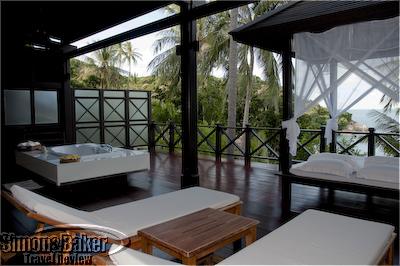 My villa featured a vast terrace for outdoor living

Closer to home, in addition common conservation practices such as reducing the use of plastics and other disposable items, implementing usage of energy and water saving devices, and treating used waters for irrigation purposes, The Tongsai Bay is engaged in one of the most comprehensive recycling efforts I have come across anywhere. I was fortunate to have Jultamart (Jul for short) as my guide for a visit of the recycling center located in a wooded area  a bumpy 15 minute drive from the property. With Jul, one of her assistants and a squadron of voracious mosquitoes, I spent a fascinating morning touring an impressively low-tech but very efficient facility that opened my eyes to the near-endless opportunities to repurpose household waste. I followed the journey of the meticulously sorted garbage (eight categories in all, in color-coded, and recycled, bags and bins) far beyond the usual trip to the local pig farm and commercial recycling plant, although some did go there.

Most fascinating to me was the Fertilizer House where vegetable waste was not only composted but transformed into natural fertilizer to be used in all the gardens of the property, including the organic herb and flower gardens that supplied the kitchens and the housekeeping department respectively. This was also where the orchids and other tropical blooming plants that graced the guest accommodations were sent to recover after they had passed their prime. 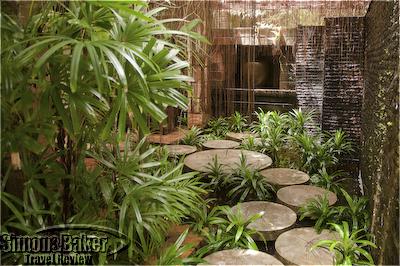 Other vegetable waste such as citrus peels was being brewed into various pesticide and house-cleaning concoctions. The look and smell of the substances in the vats were sometimes dubious but the outcome was highly effective, judging by the absence of bugs and the lush state of the gardens around the resort, where the use of chemicals was prohibited. Overall, the proven value of the Green Project has made it a blueprint for new properties that also understand the importance of preserving the island’s rich natural heritage for future generations.

I thoroughly enjoyed The Tongsai Bay, and my superbly appointed suite secluded in gorgeous natural surroundings; all the more so for knowing that I could be free of the nagging environmental concerns I sometimes feel in luxury resorts. Visit the Simon & Baker Travel Review to read more about my stay at the Tongsai Bay, Koh Samui in Thailand.