On a recent trip to Phuket, Thailand I dined at The Boathouse, a well known beach side restaurant on the southwestern coast of the island. I sampled the restaurant’s two tasting menus, French and Thai, with wine pairings. Several days later I followed up the success of the meal with a 90-minute cooking class and lunch. 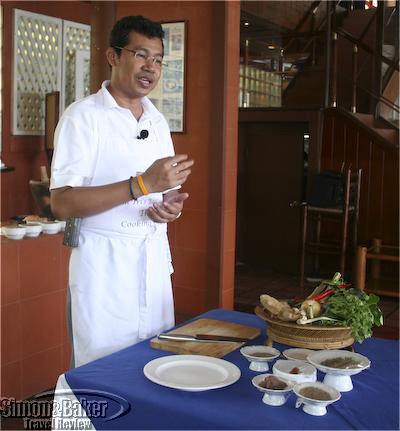 The following Saturday morning I returned to learn about Thai cuisine first hand from Tummanoon Punchun, the restaurant’s executive chef at the time. Since then the chef relocated to Chiang Mai in northern Thailand and Jean-Noël Lumineau, a French chef living in Phuket, took over The Boathouse kitchen. Khun Rattana Pholtaisong, the sous-chef who started working at the Boathouse in 1990 and assisted Chef Punchun during his tenure, has taken over the weekend Thai cooking classes. 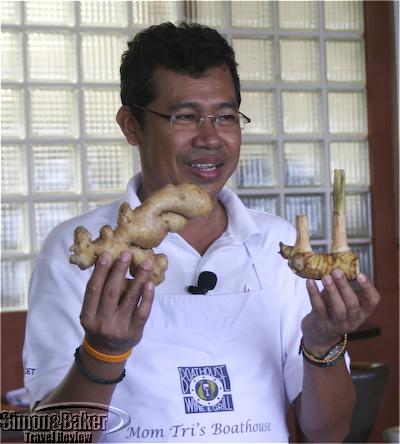 Each ingredient was discussed in detail

For more than a decade, Chef Punchun shared his passion for Thai food and cooking with food enthusiasts during weekend Thai cooking classes in English (the chef had a thick Thai accent and spoke quickly requiring close attention) from 10 a.m. to 2 p.m. each day. The class I attended was a step-by-step, hands-on session with six English speaking travelers. During most of the 90-minute workshop we sat at a small table in the rear of the restaurant facing Kata Beach. On one side there was a table with a place for each of us to assemble dishes; on the opposite side of the room there were raw ingredients and a cooking section with a sink (to wash our hands after each recipe) where the chef demonstrated how the Thai dishes he had selected should be prepared. 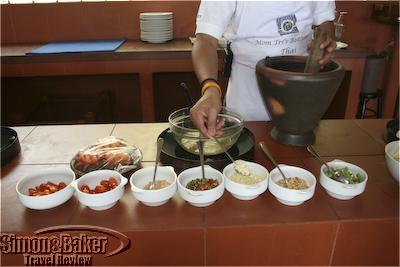 Samples of the food were cooked by the chef

After discussing the menu for the class and the material he would cover the Thai chef shared information about the identification and selection of ingredients when shopping (including options for those of us who were unable to purchase fresh ingredients in our home countries), how best to store each ingredient, ingredient pairings and methods of chopping, dicing and pounding them. He also identified the primary tastes, hot, sour, sweet, salty, bitter and aromatic flavors and discussed how ingredients interact with one another. 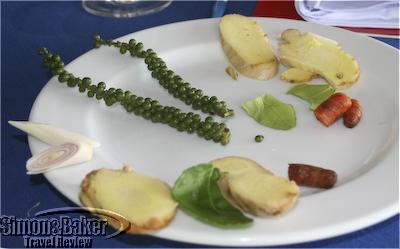 Samples of the common ingredients for the class to examine

He passed around fresh ingredient samples for us to touch and smell. Next the chef showed the class how to prepare a dish before inviting us to prepare it ourselves with his and his staff’s assistance. Then he cooked a small quantity of the items we had prepared so we could taste them before moving on to the following recipe. 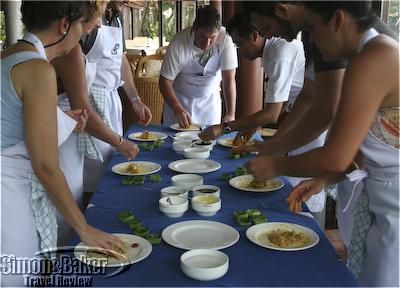 The class prepared each recipe together

When he completed the workshop and answered questions the chef departed, inviting us to relax for an hour until the lunch we had made was cooked in the kitchen and served to us in the dining room. The two-day workshop (Saturday and Sunday) cost 3,500 baht per guest and the one day workshop cost 2,200 baht per guest including lunch at the end of the workshop, an apron, a print out of the recipes and a customized certificate. 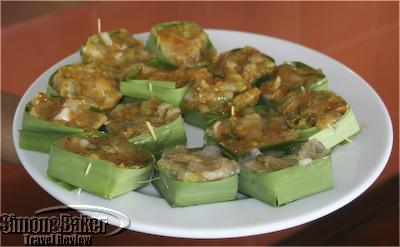 The idea behind the two-day cooking class is for students to learn ten recipes during the two days. During our Saturday session we learned about Thai ingredients, appetizers and salads. The second day, which I missed because I was leaving Phuket that day, featured recipes for main courses and desserts. 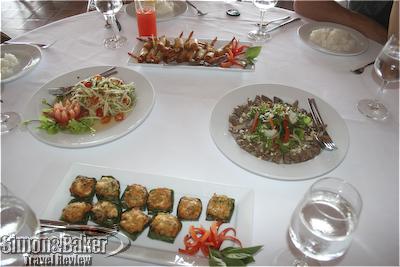 The class consumed the cooked results of their work

You can read more about my meal at The Boathouse at the Simon & Baker Travel Review.