What we liked about Naples, Italy

Naples was one of the stops in a spring multi-city trip we made to Italy earlier this year. Although in past years my travel partner and I had visited the region more than once, it was the first time we stayed in the coastal city. We arrived by train from Rome on a bright and sunny Tuesday at lunchtime to discover a lively and colorful city. 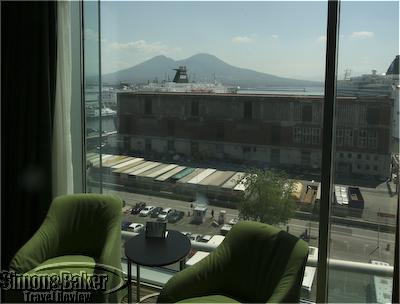 Within minutes we had maneuvered through the heavily trafficked central area to the quieter port district where our modern 10-story glass fronted hotel stood. The interior was art filled and cool. We relied on Only in Naples, a 107-page book of favorite places at our hotel, and staff recommendations to plan our discovery of the city. An hour after we stepped off the train we had settled comfortably in our hotel suite and gone for a two-hour walk near the hotel and on Via Francesco Caracciolo, a busy water hugging road where many of the tourist hotels were located. The sky was a perfect Mediterranean blue although outdoors and by the sea it was chilly and breezy. On our way back we stopped at the Gran Caffe Gambrinus in the San Giuseppe area of the city center where we had Neapolitan snacks and espresso. 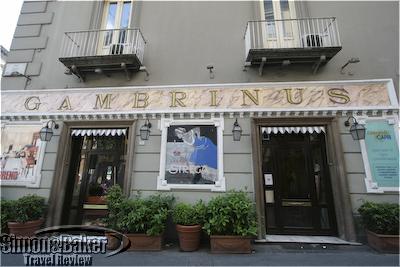 That night we went to Pizzeria Sorbillo (Via dei Tribunali, 32, 80138 Naples, Italy, telephone +39 081 446643, in Italian‎ www.accademiadellapizza.it/), where we had the most delicious pizza we have ever tasted in a two-story pizza shop in the old town. We arrived at the third generation restaurant founded by Gino Sorbillo in 1935 in the early evening to find it was half full. We sampled three pizzas which we washed down with beer. By the time we finished dinner the restaurant was full and there was a line of people on the street in front of the entrance waiting to be seated. Our host, who lives in Naples, explained it was like that every day. With our bellies full and a smile on our faces we walked in his amiable company back to our port fronting accommodations. 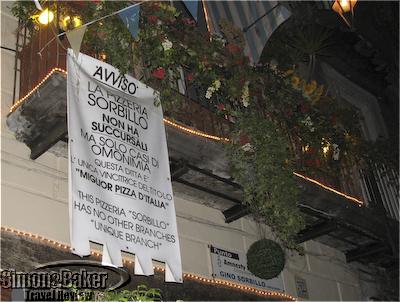 The following afternoon we went walking again. This time we found Gay-Odin Fabrica di Cioccolato (Via Toledo 427, Naples, Italy, telephone +39 081 551 3491, in Italian www.gay-odin.it) described in our book as the city’s premier chocolate makers. We stopped at a shop near the big shopping center, one of nine Gay-Odin stores in Naples and one each in Rome and Milan. The artisan chocolate makers sold a variety of the hand made chocolates in individual pieces and varying package sizes. Although the bite size morsels drew my eye it was rather hot that afternoon and we were concerned the chocolate would not hold out very long. We purchased a small Foresta made with milk chocolate with the intention of returning to buy more if we liked them. As it turns out we did like it and it quickly disappeared. Unfortunately, we never had a chance to return. Next time… 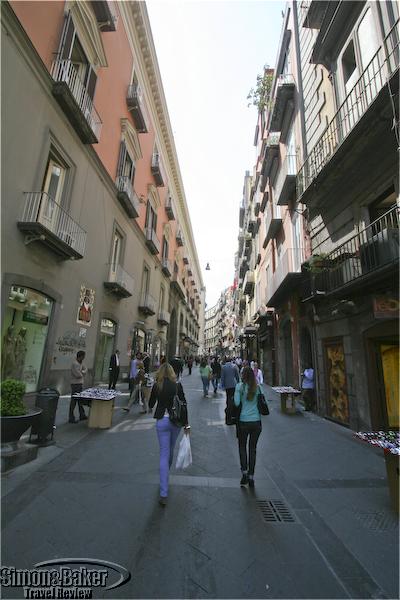 The streets of Naples were vibrant with shoppers and street vendors

The following afternoon, Gaia Montuoro, public relations and events manager at our hotel, invited us to see her hometown. In her company we visited more of the old town. We descended below ground level to see ancient ruins dating to Roman and Greek times at the Complesso San Lorenzo Maggiore. The archeological site that was discovered beneath the church, convent and cloister by the same name is a street three meters wide by 60 meters long surrounded by an ancient Roman market. Under the Roman ruins history lovers discovered older Greek remains. In places we could see the colored tiny tiles which, Gaia explained, likely represented wealthy residences. It was one of our favorite stops. More information, in Italian, at www.sanlorenzomaggiorenapoli.it/ 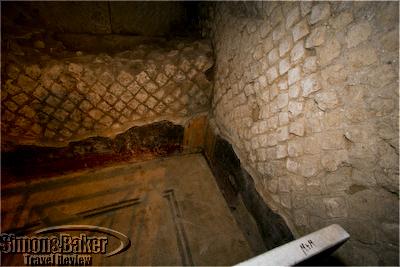 On our way to the Greco-Roman ruins we stopped in Ferrigno (Via San Gregorio Armeno 55, www.arteferrigno), the shop of an artisan nativity figurine maker before we were caught in an afternoon shower that sent us running in search of an umbrella and shelter. Giuseppe and Marco Ferrigno carry on a tradition that has been going on for nearly 200 years. They and their employees make some 500 rather elaborate terracotta, wood and silk nativity scene figurines. With the owner’s permission (spring is not a popular time for nativity figure purchases so the interior was dark) we visited the two-story shop where hundreds of figurines up to 40 centimeters tall were on display.

After we exited the San Lorenzo Maggiore ruins we stopped at the alchemist chapel or Cappella Sansevero (Via Francesco De Sanctis 19/21, 80134, Naples, Italy, telephone +39 081 5518470, info@museosansevero.it). The small space was crowded, perhaps especially so because of the rain outdoors. It housed religious art including two sculptures that stood out, The Veiled Christ by Giuseppe Sanmartino and The Veiled Truth. It was the basement that had drawn a crowd requiring us to wait for them to conclude their visit. They were observing the two anatomical exhibits of the skeletons and circulatory system of a man and a pregnant woman, Anatomical Machines, thought to have been the result of treatments on live humans; it appears scientific analysis indicates the specimens were made with iron wire, silk and wax. More information, in English, at www.museosansevero.it/index_ing.html

We then stopped at the working study and art gallery of one of Naples’ sons, Lello Esposito, a friendly artist known for his distinctive Neapolitan themed work. We were invited in to browse. As we walked through his art gallery (Palazzo Sansevero Piazza San Domenico Maggiore, 80134, Naples, Italy, lelloesposito.com, info@lelloesposito.com) we saw large distinctive and bold sculptures. Esposito, who had exhibited his art internationally and lived in New York for several months, welcomed us in Italian and shared his hope to one day prepare a United States themed exhibit.

Lello Esposito with one of his artistic creations

That evening after we recovered from our extended walks we stopped at Zero Sushi Bar, a sushi bar with a Japanese chef, on the ground floor of our hotel. The few bites we had were yummy and left me craving more sushi until a few minutes later we made our way to Il Comandante for a surprisingly delicious tasting menu.

Every outing and every meal we had in Naples was surprisingly satisfying. Starting with our comfort oriented luxury suite with a view at the Romeo Hotel and the staff’s warm welcome and guidance our visit to Naples was a great success. We look forward to a return visit.