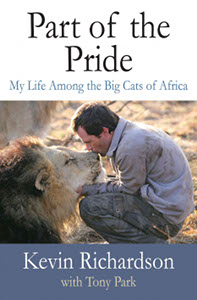 Although Kevin Richardson had a reasonably normal childhood in Johannesburg, South Africa as an adult he became extraordinary by virtue of his ability to interact safely (mostly) with predators in captivity. Lest we think rubbing nose to nose with male and female lions and hyenas in an enclosure, handling a lion cub while sharing space in the same enclosure with the lioness mum, filming commercials and entire feature length movies, often outside the safety of a park enclosure, is something any zoo staff member can do, it’s not.

It is dangerous work. No one, not even Kevin Richardson, denies that. How and why is this possible? In Part of the Pride My Life Among the Big Cats of Africa, published in 2009 (St. Martin’s Press, $25.99) he discusses his growing years and the path that led him to his amazing interactions with some of Africa’s big cats raised in captivity at the South African Lion Park and the Kingdom of the White Lion. With the help of Author Tony Park, he shares his experience as a self taught lion whisperer. 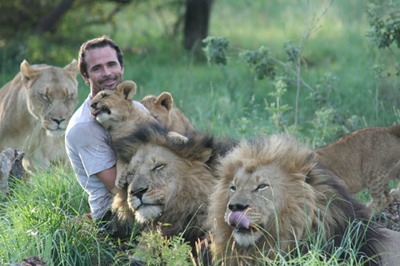 Kevin Richardson with his lion family (back cover of the book)

The 243-page hardcover book, easy to read in his candid first person style, is divided into 14 chapters, a prologue and an epilogue. For lion lovers and fans of Richardson’s work (some videos on YouTube show him in action) the book answers many questions. It made us eager to watch the two film projects mentioned in the book including White Lion: Home Is a Journey due out soon. 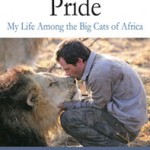 Click to buy Part of the Pride: My Life Among the Big Cats of Africa