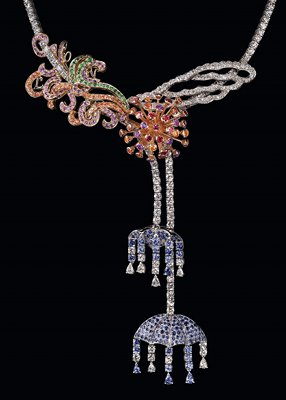 Love is set in white, yellow and pink gold with blue, pink and yellow sapphires, emeralds and diamonds 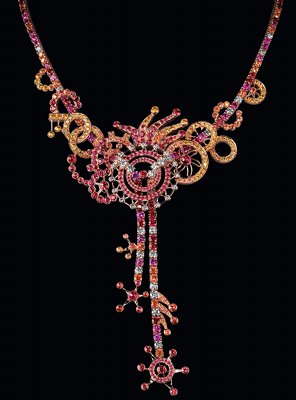 There is a new temporary exhibition at the Montreal Museum of Fine Arts (MMFA) in Montreal, Canada, Inspiria: How Cirque du Soleil Inspired the House of Boucheron to Create a Collection of Luxury Jewellery. Some are also calling it the Clown Jewels. Guy Laliberté, the founder and chief executive officer of the internationally renowned Cirque du Soleil, and the well established high fashion jewelery house Boucheron based on the Place Vendome in Paris, France have come together to present a collection of 20 necklaces that are presently on display at the museum. Each necklace was conceived to represent one of twenty Cirque du Soleil shows on tour such as Love (see Cirque du Soleil ‘Vegas show fun and Cirque du Solei The Beatles Love) and Corteo (see Italian themed Cirque show delightful). Rubies, emeralds, sapphires and diamonds are only some of the stones used to create this stunning collection.

The museum devoted a separate gallery to the exhibit of these fine jewels. The display counters unfold like a magnificent ribbon winding down from the ceiling and flowing across the room. Encased in sunken boxes, each necklace is described with a text explaining how the jewelers were inspired by that particular show. Suspended above each necklace is a video clip of the show represented by the necklace. Brilliant craftsmanship, flowing shapes and movements are reflected in both works. Gouache drawings of each necklace are displayed on the walls. I found it fascinating to see the transformation from drawing to actual object. There is also a short video on the selection of jewels and the actual fabrication of the necklaces from sketch to finished product. 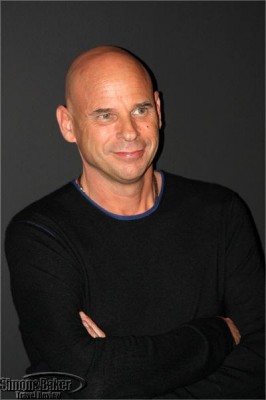 Exceptionally two sets of each necklace were made. One set remains in the private collection of Guy Laliberté and the other collection, presently on display, is for sale. Another first for this collaboration is the fact that some of the profit from the sale of the jewelery will go to the One Drop Foundation, a charity founded by Guy Laliberté to ensure that everyone across the planet has access to clean water now and in the future. 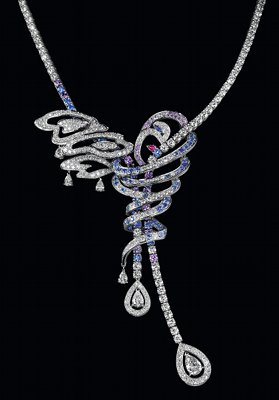 Boucheron, founded in Paris in 1858 by Frédéric Boucheron, has been jeweler to courtesans and kings, maharajahs and czars. The company rose to prominence during the Art Déco period in Europe and its jewelers have been creators of luxurious jewelery ever since. Jean Christophe Bedos, president, House of Boucheron attended the exhibit opening. Cirque du Soleil is well known for spectacular shows with acrobatics, costumes and original music. 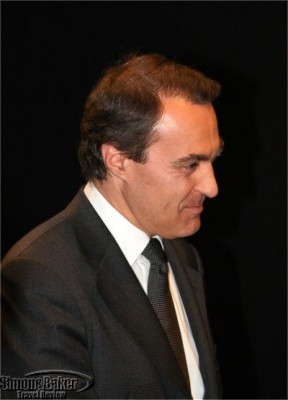 As an admirer of fine jewelery I thought the free-admission exhibition was well worth the visit. This collection exhibit coincides with the 25 anniversary of Cirque du Soleil and the opening of its new show Totem scheduled to open April 22, 2010 and run through June 27, 2010 at Le Grand Chapiteau (the Big Tent) in Old Montreal. Montreal, the home base for Cirque du Soleil, is a fitting location for the opening exhibition of Inspiria inspired by the Cirque shows. See it at the Jean Noel Desmarais Pavilion of the Montreal Museum of Fine Arts (MMFA) in Montreal Quebec, Canada (514-285-5000, 1-800-899-MUSE, www.mbam.qc.ca) until August 29, 2010. 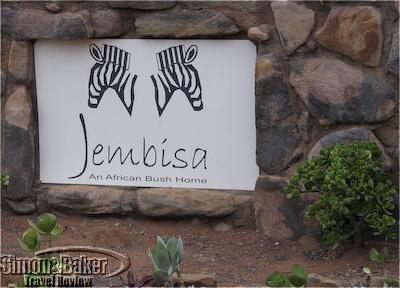 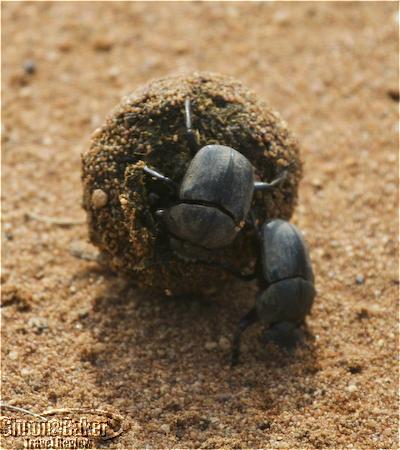 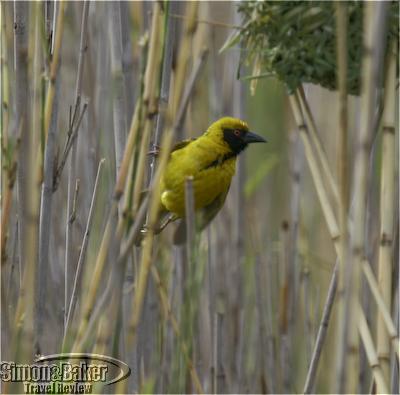 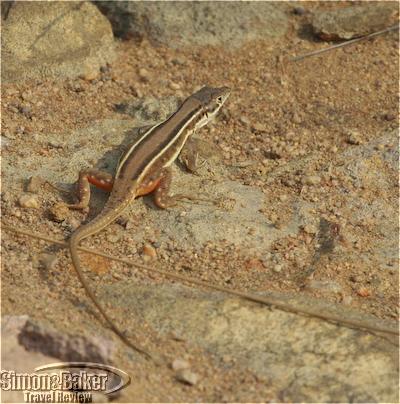 At Jembisa there was time to observe the little creatures too 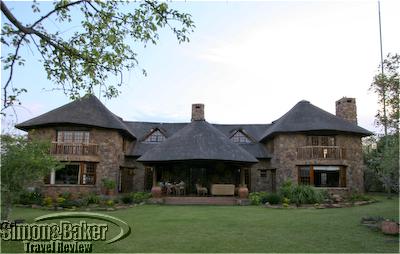 A view from the gardens of the back of Jembisa 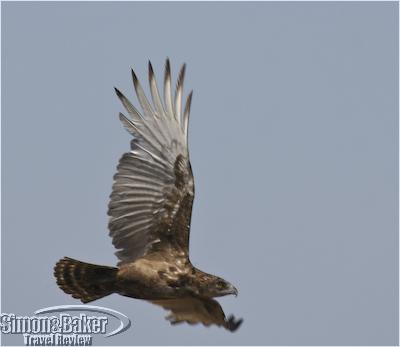 A predator with wings 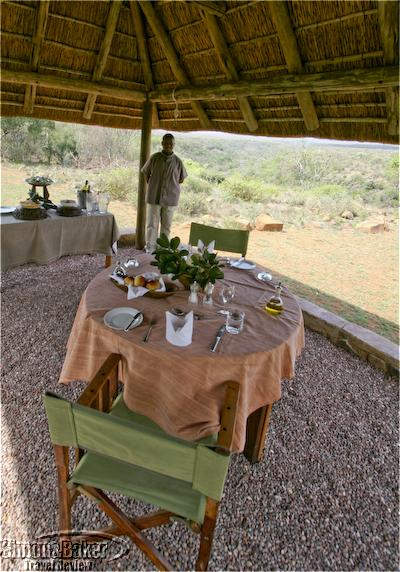 A tasty lunch with a bush view at Jembisa

Jembisa, a private rental home with staff within a bush reserve, is in South Africa’s Waterberg region a short drive from Johannesburg. During our team’s stay at the former family home they focused on the charms, large and small, of bush living. They spent their days relaxing in the comfortable six-bedroom exclusive use house, playing with one of three resident dogs, going for a stroll, enjoying a home cooked meal made by local staff and exploring the plant and animal life in the area during guided game drives with their enthusiastic guide. Click here to read about our team’s impressions of Jembisa. 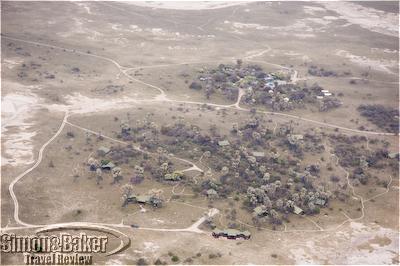 Jack's Camp was an oasis of luxury in the Kalahari

With my recent visit to Botswana came the opportunity to explore some of the many faces of the Kalahari Desert. Derived from the Setswana word kgalagadi usually interpreted as “the great thirst,” or “thirstland,” the Kalahari is a mantle of sand that covers roughly 70 percent of the country. My Kalahari experience began with a bush plane flight from Maun, the main gateway to Bostwana’s safari areas. For almost an hour, the plane droned on and the sun-baked emptiness below never seemed to change. Then suddenly the swirling horizon of dusty sandbars and gleaming salt pans was interrupted by an incongruous line of fan palm trees. “Jack’s Camp,” the pilot announced with a nudge in the direction of the palms. 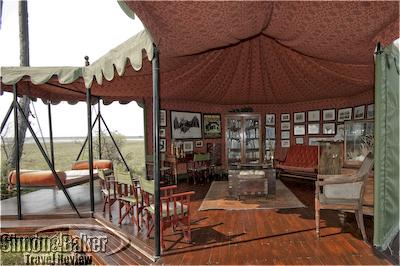 The library at Jack's Camp 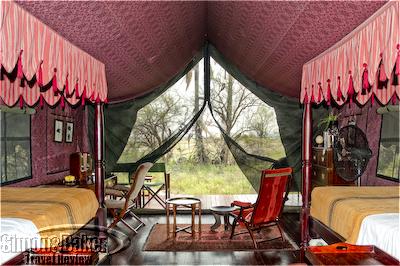 My tent had a view of the Makgadikgadi Salt Pans

Located in a remote oasis overlooking the Makgadikgadi Salt Pans, Jack’s Camp was a magical place reminiscent of the grand East African safaris camps of a bygone area. The spacious tents were decorated with antique furniture and oriental rugs, their interior draped with faded chintz and their en-suite bathrooms featuring indoor and outdoor showers with flawlessly polished copper fixtures. Service was commensurate with the elegance of the camp. But the superb accommodations and service were but a prelude to the outstanding quality and variety of activities provided by the expert guiding staff of Jack’s Camp. 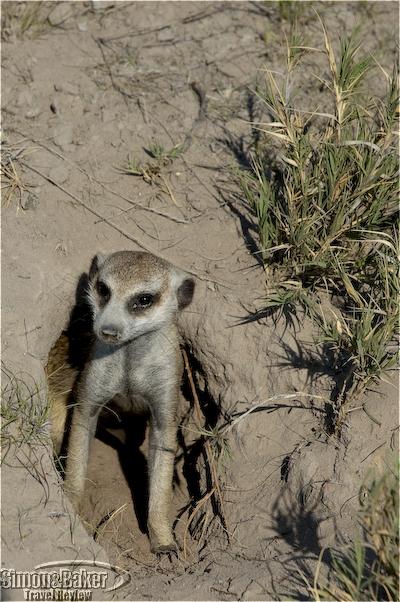 A meerkat emerges from its burrow 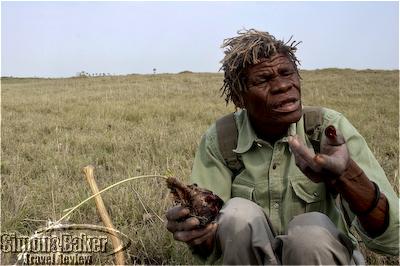 A nature walk with Cobra, a Zu/’hoasi bushman elder 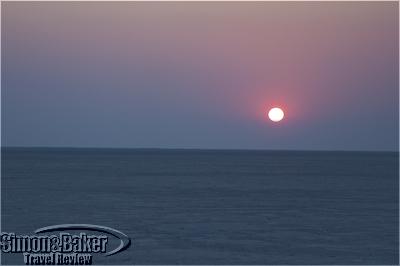 The sun sets over the Makgadikgadi Salt Pans

I spent a delightful morning standing among a colony of meerkats (although wild, these squirrel-sized mongooses were sufficiently habituated to humans that they were unconcerned by my presence). I marveled at the daily sight of hundreds of zebras and wildebeests arriving from the Boteti River to the west for their yearly migration to the Makgadikgadi Salt Pans. I went on a nature walk with a Zu/’hoasi bushman elder who showed me the plants that had ensured the survival of his ancestors for millennia. I rode a quad bike ride deep into the Pans to watch the sun set and the moon rise over their blistered infinity. Click here to read more about the many unique experiences of my stay at Jack’s Camp. 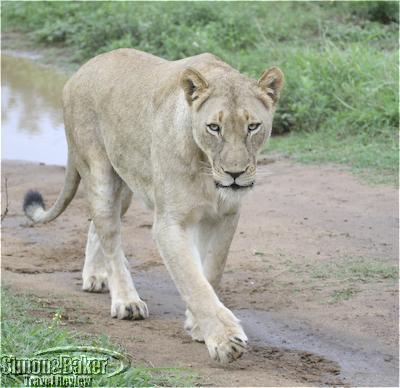 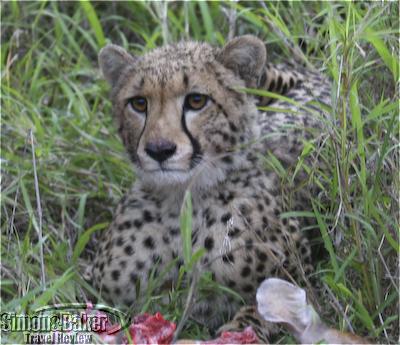 We saw lion several times and cheetah once during our stay 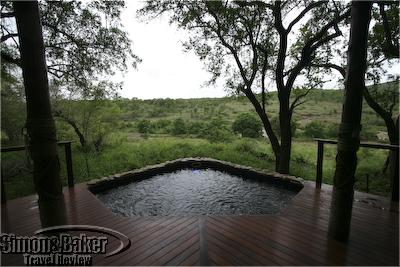 The Jacuzzi at my luxury one bedroom suite

We enjoyed good game viewing and many of the luxury features of Amakhosi Safari Lodge, a family friendly property with minimal malaria risk in South Africa’s KwaZulu Natal region. Although this area of the country, located near Durban in the east, has not been well known by safari oriented international visitors in the past this may change in 2010 with the added traffic from the FIFA World Cup games. 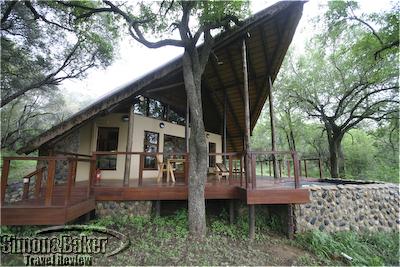 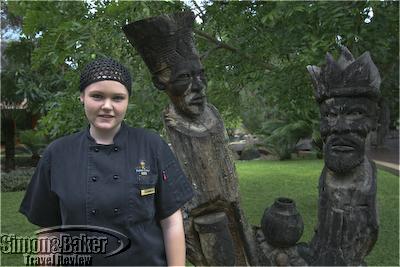 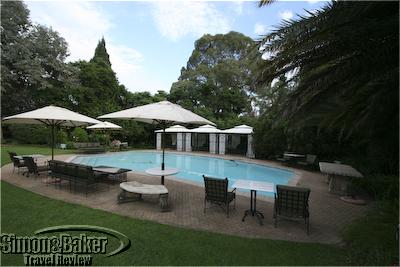 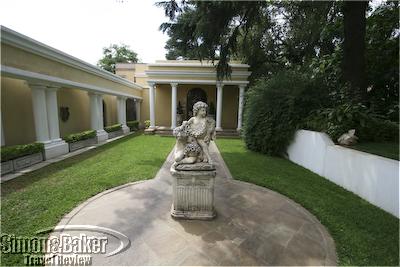 One of the first things we noticed on arriving at the Fairlawns Boutique Hotel & Spa in an upscale residential neighborhood of Johannesburg, South Africa was the scented saringa flowering tree at the entrance. Once cleared through the obligatory guarded gate we were surprised to find a quiet property dotted with manicured gardens. In addition to spacious and luxuriously appointed one-bedroom suites, the growing hotel (a new building was under construction) had meeting rooms, a work out area, a swimming pool, a restaurant and spa on site.

Reception and the restaurant were in a single story main building. Within a two-minute walk several separate two-story buildings housed the spa and fitness area and guest suites. After checking in we were led past the restaurant and central gardens to our respective suites within one of the two-story new looking buildings. Our ground floor one bedroom suites, suites 13 and 15 named for Emily Hobhouse and Nelson Mandela respectively, were spacious and handsomely decorated, each one with a different interior design style (during a second visit we stayed upstairs in the Oppenheimer Suite). 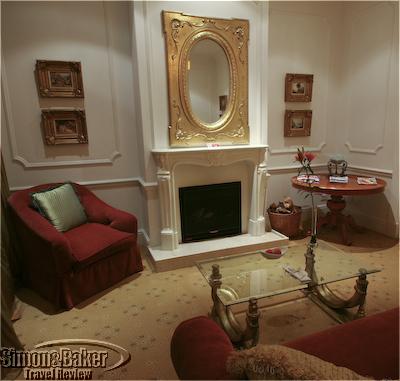 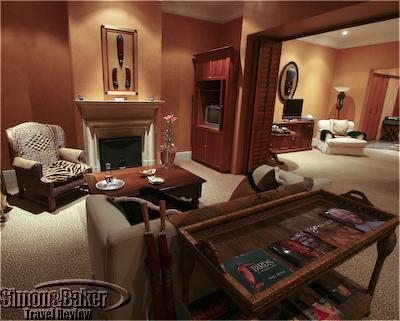 Living area of the Mandela Suite

The suites were well appointed including complimentary WiFi Internet access and spotlessly clean. My favorite, suite 15, was divided into three distinct areas, a living area, a sleeping area and a bathroom. Decorated in an Africa theme it had animal print accents and a comfy sofa facing a fireplace (underfloor heating kept my suite toasty too). For the media minded there were two television sets, including a large flat screen television and DVD player across from the king bed in the bedroom. 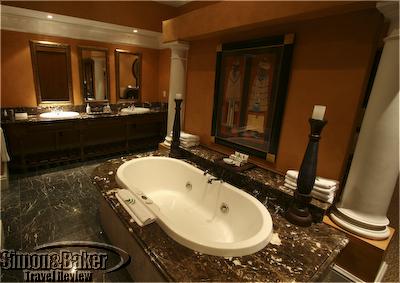 The Jacuzzi bathtub in the Mandela Suite

The bathroom too was spacious with marble counters and floors, twin sinks, shower, water closet with bidet, and Jacuzzi bathtub. Tall built-in closets with an ironing board and electronic safe took up one entire wall opposite the sinks. 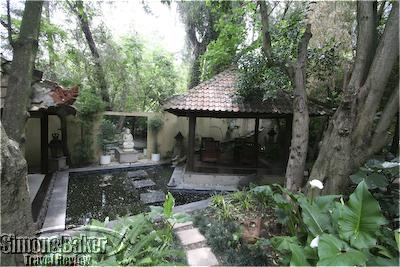 The spa building, across the lawn from our building, had a work out room accessible at guest convenience with the electronic room key. I was pleased to be the first to arrive, at 6 a.m., for an early work out although I was soon joined by others. The spa itself was mostly in an adjacent walled garden area next to, and separate from, the swimming pool. The shady spa garden was filled with private corners and treatment rooms. In spite of our arrival in the late afternoon (spa treatments were available until 5 p.m.) we were in time to enjoy side by side massages in one of the loveliest and largest treatment rooms in the far corner of the spa garden. 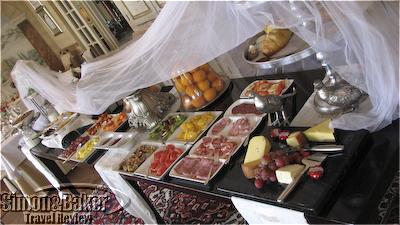 The breakfast buffet at the Fairlawns Boutique Hotel & Spa

While were were there we sampled a couple of items from the room service menu and dined in the outdoor area of the restaurant. Mornings were my favorite meal time at the Fairlawns. There was an ample breakfast buffet with cereals, fruits (fresh and dried), cheeses, deli meats, cold fish, and varied delicious homemade pastries to compete with the made to order breakfast menu. Sitting in the restaurant patio under the shade of large umbrellas we enjoyed the placid view of the nearby pool and flower filled gardens. We look forward to revisiting the Fairlawns Boutique Hotel & Spa, Alma Road, Morningside Manor, Ext. 6, Sandton, Johannesburg, fairlawn@fairlawns.co.za, +27 11 804 2540/1/2/3, http://www.fairlawns.co.za/