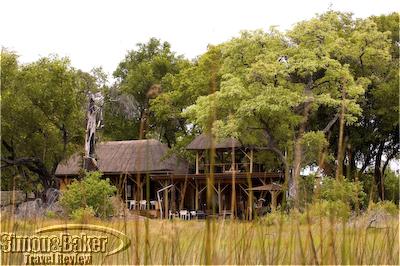 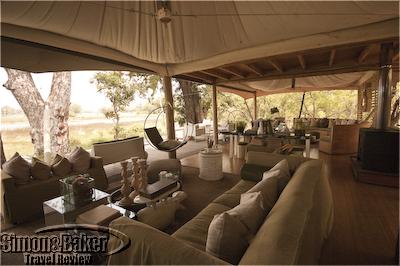 The lounge at Xaranna 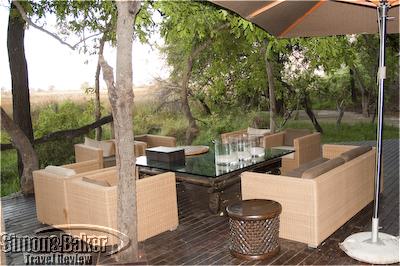 My first experience of the exceptional hospitality of the staff of &Beyond Botswana occurred two weeks before I was scheduled to enter their fold. It was my first visit to Botswana. I had just landed in Maun, the gateway to the country’s main safari destinations, on my way to the Kalahari Desert. It quickly became obvious that contrary to the assurances I had received from the organizers of the first leg of my itinerary, nobody was on hand to meet me.

A young man in the crisp khaki garb of safari operators, having doubtless noticed in my eyes the disoriented look of the unclaimed tourist, kindly offered his assistance. I explained my situation and within minutes he was orchestrating my rescue. Once he was assured that my host company was on its way, he sat with me for the next hour until he could personally hand me over to the pilot of the chartered flight that was to take me to my destination. It was not until then that I glanced at his nametag. My savior was Palo Moriri of the local &Beyond Botswana office.

I returned to Maun Airport two weeks later to wrap up my itinerary with three stops in the heart of the Okavango Delta. Each was an &Beyond Botswana property. Palo was waiting for me with the warm smile of an old friend. In no time I was on my way to Nxabega (pronounced Na-ber-rah, he informed me). Xudum (pronounced Kudum) and Xaranna (Ka-rha-nah) followed. While each had a distinct personality, all three were outstanding in their location (remote conservancies rich with wildlife), the luxury of their accommodations and, most of all, the quality of their hospitality. The superb service delivered by every member of the staff spoke well for the excellence of their training. Their enthusiasm in making sure that I would enjoy every instant of my stay with them was obvious. However, what struck me was the pride everyone took in being a part of the &Beyond community and in welcoming me to it.

Property managers told me about the company’s motto: ”Care of the Land, Care of the Wildlife and Care of the People,” and how they endeavored to live up to it within their camps. They mentioned that internal eco-audits, conducted periodically to ensure best operating practices, are maintained to minimize the impact of their operation upon the environment. And they happily pointed to success stories within their staff, of team members rising through the ranks thanks to internal mentoring and their own eagerness to excel. One such young man, my guide at Xudum, Ona Basimane, told me how, after joining &Beyond as a tracker in 2008, with the support of the camp’s head guide, he had succeeded in completing the guide licensing exams in a year’s time (the process usually takes at least three years). “There is a great guiding culture at &Beyond,” Ona said. “My aim is to become a guide trainer; mentor others and give back to the company.”

An exciting leopard sighting at Nxabega 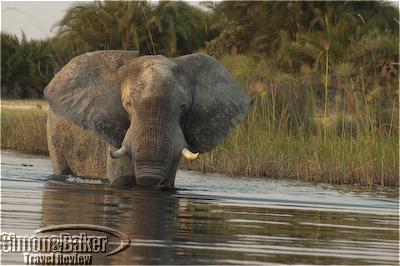 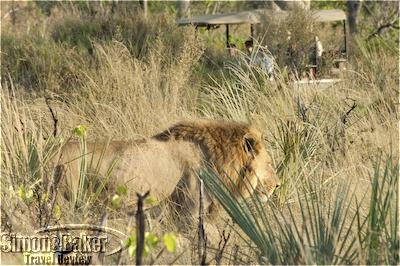 A lion sighting on a morning game drive

I was told that guides are encouraged to share their knowledge not only with the guests or their own colleagues, but also with the local conservation organizations. At Nxabega, my guide, Maxy Tidimalo, explained the importance of birds as an environmental indicator, and how he and his colleagues were monitoring the endangered wattle crane and slaty egret. They were gathering data for BirdLife Botswana as part of a program to understand the population dynamics and ecological the requirements of wetland-dependent species. 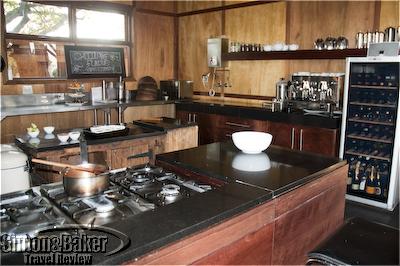 I noticed the same sense of purpose among the household staff. In the Xudum kitchen, Chef Pauline Tjetjoo and Charity, the sous-chef, were excited to introduce me to Amanda Collins, the training chef, who was at the lodge on her periodic round to help kitchen staff polish their skills and add new recipes to the menu. Several butlers confided they were training to become trackers or assistant managers. But that didn’t distract them from pampering me. When I arrived at Xudum, I found the icebox in my suite stocked with my favorite beverage. When I asked my butler Itumelang how she knew, she explained that when guests came from other &Beyond properties, the butlers always shared this kind of information. 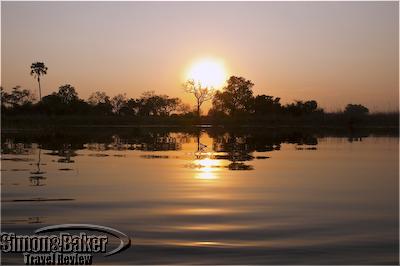 I quickly became caught up in the excitement of the &Beyonders as the staff I met referred to themselves, and it added up to a richer wilderness experience for me. My enjoyment of these pristine conservancies and outstanding facilities was enhanced by the thought that by my visit I too was making a contribution, however small, to the care of the land, the wildlife and the people of the Okavango Delta. Click here to read more about my stay in Nxabega, Xudum and Xaranna