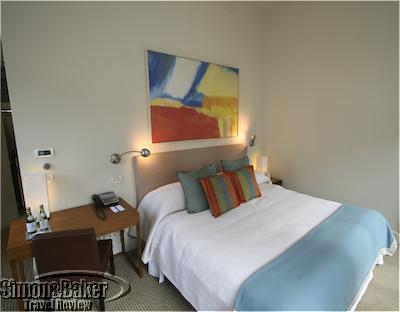 One of three Rocco Forte German properties Villa Kennedy opened as a hotel in 2006 on the grounds of the former Villa Speyer, the home of a wealthy family dating back to 1904. Recently, the owners added three wings to the original historic building, updating and modernizing wherever possible and creating a square property around an inner courtyard with an attractive open terrace. According to a hotel spokesperson, while most Villa Kennedy guests are German many are also British and American visitors including celebrities, musicians and politicians. Most staff we encountered spoke some English.

We stayed in a Classic Suite with a Rocco Forte Suite Experience package (1,050 euros per night). Our 615 square foot vertically shaped courtyard facing room was on the second floor of the four floor luxury property. The 163 room (including 29 suites) business oriented hotel with a staff compliment of 170 and emphasis on security was named for John F. Kennedy who met with local politicians before his famous visit to Berlin.

Our suite, decorated in shades of sandstone, had a living area immediately past the entrance populated by wall facing desk, two-seat sofa, armchair, coffee chair, and  cabinet with a mini refrigerator and flat screen Phillips television. The sleeping area had five large windows from which we could see the courtyard, the windows of neighboring rooms across the square, and our immediate neighbor’s balcony. This meant it was filled with sunlight. It also gave us the impression the interior of the room could be seen from the rooms across the courtyard. As the sun set we closed our shades to maintain some privacy. 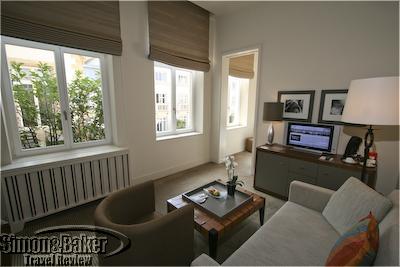 In addition to regular suite amenities like underfloor heating in the bathroom, cotton bathrobes and slippers, room temperature set at a maximum of 69 degrees Fahrenheit (21 degrees Celsius), choice of five types of pillow, Lino Vino white linen sheets and made in the U.S.A. Aromatherapy Associates toiletries; there were several additional amenities in our Rocco Forte Suite Experience package.

These included: high speed Internet access (we were surfing within minutes), movies, packing and unpacking service, a loaner mobile phone for complimentary local use, pre-programmed with area numbers as well as a direct line to reception and the concierge (the phone we were given was out of batteries and there was no back up phone available), in-suite check in and check-out (our check-in was at the front desk and when we departed we took advantage of the express check out option), in-suite breakfast option (we had breakfast in the dining room) and pressing service (the second time I called reception to request pressing pick up someone came by for my clothing. The two items I sent were pressed with alacrity and returned within the hour). 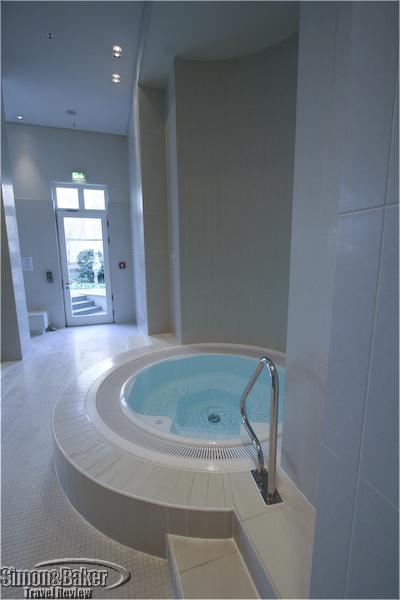 Salient features of the child friendly property included high ceilings, a minimalist deluxe style, organic products, a restaurant and an in house spa with a 15 meter indoor swimming pool, eight treatment rooms, and a his and her saunas. We especially enjoyed an early morning swim in the cool waters of the swimming pool and the organically oriented yummy breakfast buffet with cooked to order hot dishes. A friendly Italian server looked after us during our weekend meal. Villa Kennedy, Kennedyalle 70 D-60596 Frankfurt am Main, +49 49 717 120, villakennedy.com and info.villakennedy@roccofortecollection.