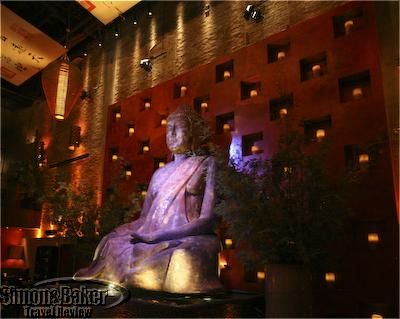 Except for the near empty state of the large restaurant (we arrived in the late afternoon) it would have been hard to tell what time of day or night it was inside Tao Asian Bistro (3377 Las Vegas Blvd. South, Las Vegas, NV 89109, +1-702-388-8338, Taolasvegas.com). Such was the style of the nightclub and bistro which could accommodate 2,000 guests. Located at The Venetian Resort-Hotel-Casino, the two-story restaurant was crawling with shadows that made it appear mysterious. Done in a slightly different way it could have felt soulless but bright shades of red, brick walls, kanji characters reflected on the ceiling and larger than life decorative oriental artifacts lent it a certain magic. It had the air of a place that comes alive with patrons, especially in the evening. 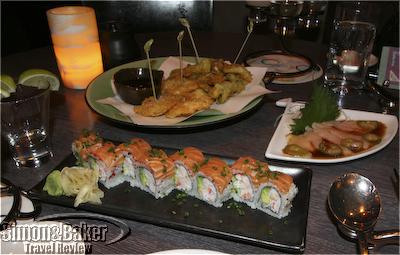 The hostess led us to the last booth, tucked away next to the kitchen door and across from a giant Buddha. Chris, our friendly and knowledgeable server, was with us moments later. At his suggestion, we tried two martinis: Tao-tini (Absolute Mandarin, Stoli Rasberry, Malibu Rum, cranberry and fresh lime juice) and a Lychee Martini (Ketel One, Triple and fresh luchee puree). For starters we shared the Yellowtail Sashimi with Jalapeño and Ponzu Sauce (a favorite); Alaskan Salmon, Crab and Avocado Roll; Kimchee and Baby Shanghai Bok Choy with Garlic. 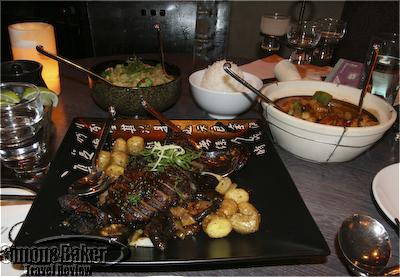 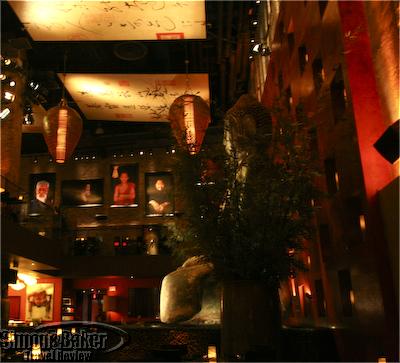 View of the Tao dining room from our seats

We washed it all down with six types of sake (Chris recommended this) including three “crazy fun” ones. He brought us the Spirit and Eternal selections from the sake by the glass menu. As we headed to our show (that’s why we arrived so early), the thought occured to me that although we sampled lots of savory dishes and drinks we would were pleasantly satisfied. We had a fun and enjoyable dinner at Tao.