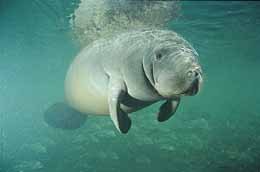 West Indian manatees are protected in the United States under federal law by the Marine Mammal Protection Act of 1972 and the Endangered Species Act of 1973, which make it illegal to harass, hunt, capture, or kill any marine mammal. They are also protected by the Florida Manatee Sanctuary Act of 1978.

The Florida Fish & Wildlife Conservation Commission will vote on Wednesday, June 7, 2006 (at the West Palm Beach Marriott), on whether to downlist manatees and three other species.  According to the Save the Manatee Club, conservation and animal welfare groups, and concerned citizens from Florida and around the nation urge the State to revise its imperiled species classification system to ensure numerous native species are not downlisted or delisted before their populations are recovered.

West Indian manatees are cute and rather large, gray aquatic mammals with round bodies that taper to a flat tail. They have two forelimbs called flippers and wrinkled head and face with whiskers on the snout. Related to the elephant and the hyrax, manatees are believed to have evolved from a wading, plant-eating animal. Manatees are harmless and slow-moving, dedicating their time to eating, resting, and migrating.

The average adult manatee is about 9.8 feet (three meters) long and weighs between 800-1,200 pounds (362-544 kilograms). A migratory herbivorous species they spend their time in shallow, calm rivers, estuaries, saltwater bays, canals and coastal areas. In the United States, West Indian manatees are most often in Florida in the winter, although in the summer they can be seen in Alabama, Georgia and South Carolina. They may also be found in Central America and along the northern coast of South America.

For information on manatees visit SaveTheManatee.org and for details on the upcoming Florida Fish & Wildlife Conservation Commission meeting online, go to MYFWC.com