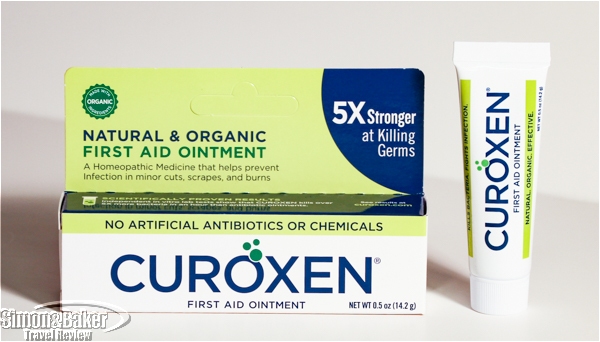 Curoxen was made by an Italian homeopathic medicine company, according to the manufacturer’s website.

A couple of days after receiving a half-ounce tube of Curoxen: First Aid Ointment in the mail, I accidentally cut myself. The ointment soothed the cut immediately. My skin seemed to heal so fast I wasn’t even sure exactly when it happened, perhaps faster than my standard antibiotic ointment. A week later, I couldn’t even remember exactly where the cut had been. I would take Curoxen First Aid with me on my next trip, rather than my usual ointment.

The Curoxen tube said it uses a natural approach as an alternative to conventional treatments to prevent infection, heal and reduce pain for minor wounds, burns, cuts, and scrapes while relying on homeopathy, a European philosophy of “likes cures like” developed in the 18th century. I agree, as the box notes, that “overuse of antibiotics is a global problem.”

According to the company website, Curoxen is available over-the-counter at pharmacies. The half-ounce tube retailed for $9.99 and the one ounce size for $14.99. The active ingredients, per the package were olive extract “2X HPUS and calendula 3X HPUS.” This refers to the standards of the Homeopathic Pharmacopoeia of the United States. Homeopathy uses minute amounts of organic substances, which homeopathic doctors believe help specific problems. The 2X and 3X indicate the number of times the ingredient was diluted in the process of making it, so that there is one percent of the olive extract and just one-tenth of a percent of the calendula. The inactive ingredients were oxygenated olive oil and pure essential oil of lavender. The box indicated there were no petroleum products or preservatives. 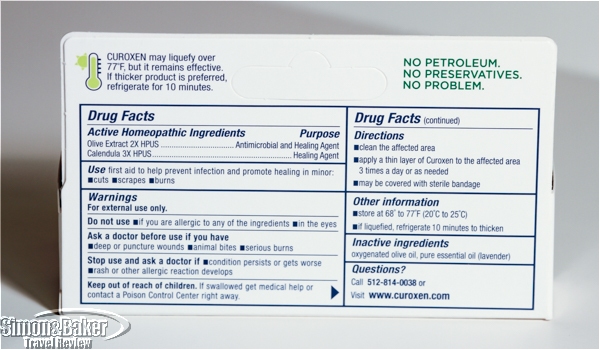 The back of the package listed the active homeopathic ingredients and other important information.

According to the website of Curoxen’s parent company OrganiCare (2101 E. St. Elmo Road, Austin Texas 78744, +1 512-401-3572, www.curoxen.com, info@organicare.com), independent in vitro lab tests show that this product “kills over five times more bacteria than antibiotic ointments.” The formula was based on an Italian university discovery of the healing benefits of olive oil when combined with oxygen. Curoxen was manufactured by an Italian homeopathic medicine company, according to the website (I could not find the country of manufacture on the package).

Per her bio, Caroline Goodner, chief executive officer, OrganiCare, founded two genetics companies and was chief executive of a firm specializing in wellness products for new moms. David Shockley, chairman, was described as a biologist focused on innovation in medical devices. Eleanor Piel Womack, M.D. was listed as board certified in internal medicine and anti-aging and regenerative medicine and the company’s medical advisor on the Curoxen website.

Having worked with integrative doctors, who relied on conventional and unorthodox medicine, I have heard of many patients claims to be helped by homeopathy. Also, I have heard anecdotes from pilots who swore by the formula for jet lag, and people who massaged painful legs with an ointment they claimed worked better than anything else. While I don’t believe the effectiveness of homeopathy has been proven in humans, it’s hard for me to dismiss my experience with this ointment as purely psychosomatic.