New book inspired me to expand my travel bucket list 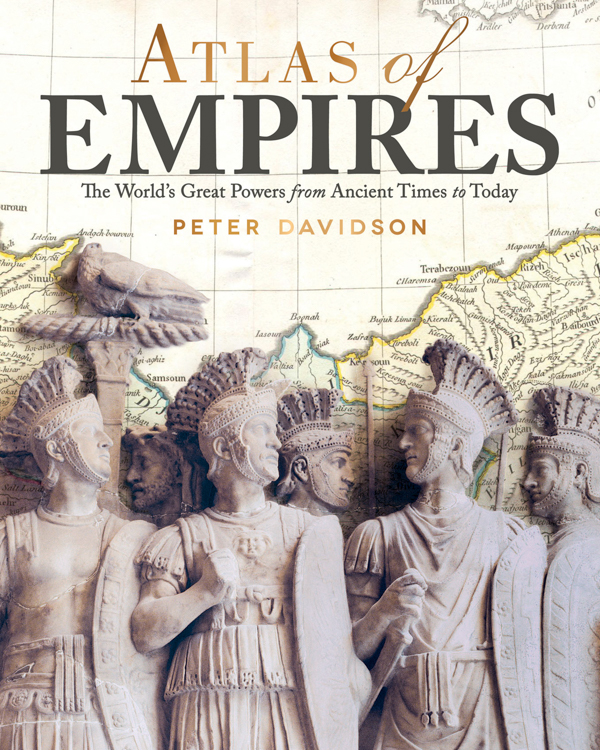 I’ve been hooked on visiting destinations that played some important role in history from the moment I first set foot on foreign soil at 19 in what was then called West Germany (where my jaw stayed dropped for two years just looking at the ancient architecture). I’ve been fortunate in having had a chance to write extensively about the events and leaders of the past, and I’ve learned that there is no book, film, or website that can replace the 3-D experience of being at ground zero of some world-changing moment (usually served by a cutting-edge local museum that can thrive at a place of pilgrimage for history buffs).

That said, Atlas of Empires: The World’s Great Powers from Ancient Times to Today by Peter Davidson (Fox Chapel Publishing, $19.99), a 240-page paperback published in 2018, comes close to being a time machine that immersed me in its pages. When I read history in hard copy, I’m used to having to highlight the text I think I will need when I write (or if it’s an overview covering a topic I think I know, I listen to CDs when on long drives or stuck in traffic, usually from the estimable Teaching Company). I found myself underlining passages on almost every page of Davidson’s tome.

What I don’t tend to do with books is study the graphics, unless they involve battlefield movements. But this Atlas was a revelation of global history for me. Its text and pictures prompted me to make connections between empires and events, reminding me of facts I had forgotten, and enriching my future travels, even illuminating my past trips. Davidson (co-author of Milestones of History and a director of documentaries for the History Channel) wrote a remarkably concise yet thorough summary of the major events of world history, describing how each civilization grew and the causes for its disappearance or its evolution into today’s nations. 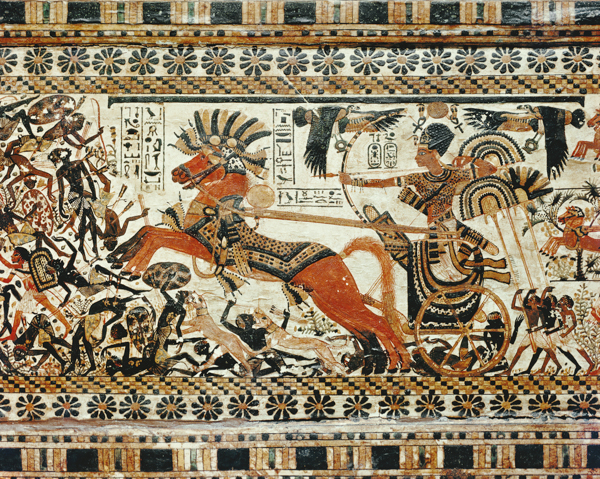 Circa 2005, detail showing the destruction of the black Africans painted on the box of stuccoed wood, from the tomb of the pharaoh Tutankhamun. (Image by ©Robert Harding World Imagery/Corbis)

It’s one thing to recall that Egypt’s Old Kingdom, whose pharaohs built the first pyramids, lasted five centuries, B.C. 2686 to 2181 (BCE for the politically correct). But even though I had made my first book report on Egypt in third grade and had the honor of having the country’s head of antiquities, Zahi Hawas, as our guide through the stunning Cairo Museum, I had forgotten that the Middle and New Kingdoms also lasted a half century each. The thumbnail sketches of the great pharaohs highlight their astonishingly long reigns. For example, Thutmose III, who was constantly on the front lines and expanded the empire to its farthest reaches, died after 54 years on the throne. Rameses II built many of the great monuments during his 67 years in power. Yet Tutankhamun, whose treasures are touring the United States as I write, only lasted nine years as pharaoh.

The chapter on Persia is a reminder of how well some far-flung ancient empires were managed, despite staggering challenges in communications, logistics, and cultural differences. The godfather of the study of modern business management, Peter Drucker, was once asked who the greatest leader in history was. His answer surprised many (and implied it’s been downhill since): Cyrus the Great, who became leader of the Persian tribes in 559 B.C. and died in battle in today’s Kazakhstan in 530. He fostered goodwill and loyalty by promoting religious tolerance and is mentioned 22 times in the Bible, having freed the Jews to return to Israel in 538 after 48 years of captivity in Babylonia (Cyrus is said to be the only gentile who was ever declared a “messiah”). With Iran constantly in the news for the past four decades, it’s helpful to know how it fits into the Persian empire it identifies with. That stretched north to include what is now Uzbekistan (the city of Samarkand is one of the world’s great and largely undiscovered destinations), east to encompass Afghanistan and Pakistan, and west to take in part of modern Greece, Turkey, and Egypt.

The text is full of facts that surprised me: Sparta’s population was 80 percent slaves (compared to Athens’ 30 percent); celibacy was only insisted on for all clergy by the pope in 1074; 240,000 were killed in the final battle for the Aztec capital of Tenochtitlan; the Inca empire, which stretched 3,000 miles, was managed without writing; 20,000 of the African American slaves who fought against the colonists during the American Revolution left with the British afterwards; in 1839, the Chinese dumped 20,000 chests of opium into the sea, which had been delivered by British traders, so the United Kingdom’s government retaliated by sending gunships to annex Hong Kong and open five new ports. 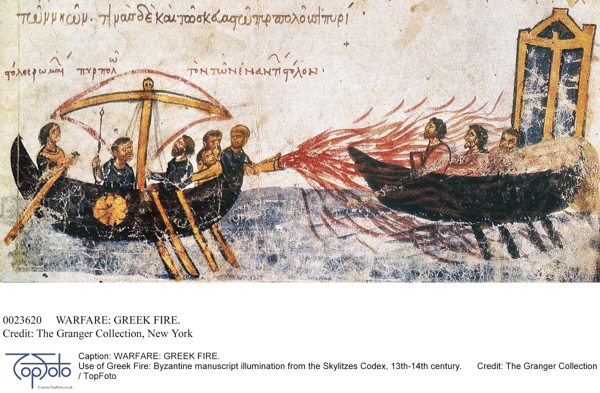 Use of Greek Fire: Byzantine manuscript illumination from the Skylitzes Codex, 13th-14th centuries.

While the book’s art is often eye-catching (such as statues depicting Genghis Kahn’s mounted warriors near Mongolia’s capital of Ulaanbaatar, Byzantine sailors spraying Arab ships with mysterious “liquid fire”), the reason this volume is essential for me as a serious history traveler is the maps. By using different shades to denote where and when empires expanded, even newbies to historical geography can quickly grasp the flow of conquest or assimilation. There are also symbols that show what the most important economic resources were for the region, including slaves, obsidian, and hemp. Gold made Mansa Musa of the Kingdom of Mali in northwest Africa the wealthiest man of all time with $400 billion in today’s money (ruling from 1312 to 1337 A.D. BCE). Davidson is particularly good at working in business history, such as how and where tiny Netherlands created a far-flung commercial empire by taking advantage of new technology and financial systems.

The maps make clear the vast territory that the Mongols conquered (from eastern Europe east, including most of the Middle East, Central Asia, Russia, and China), where precisely the first global empire, Spain’s, was located; and what it meant for the sun to never set over land where the British queen reigned. The maps that break down Chinese history helped me as a non-specialist understand the territory ruled by the dynasties of the Qin, Han, Tang, Song, Yuan, Ming, and Qing, and how they were culturally different (under the Ming, Admiral Zheng’s large fleets sailed as far as Africa. I think Gavin Menzies makes compelling arguments for his foray across the Pacific in 1421: The Year China Discovered America).

Also valuable is the recommended list of books for each chapter for readers who would like to know more about the people, stories, and meaning of history without being drowned in the details of scholarship. I plan to give this book the time it deserves by taking it on a trip to read the short chapters and study the maps in spare moments, like waiting in line at the airport. If I wasn’t making historical destinations a priority before, I have a much longer bucket list now that I finished reading it.