We unexpectedly loved Victoria and Albert Museum, especially for its sculpture collection 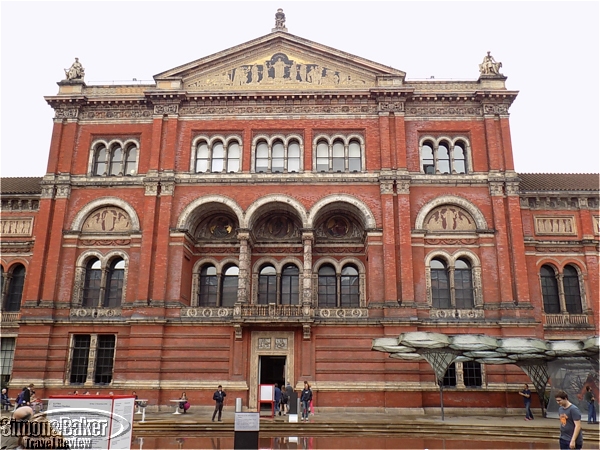 In September 2016, my wife, Sandra, and I reluctantly visited the Victoria and Albert Museum, VAM, (Cromwell Road, +44 020 7942 2000, www.vam.ac.uk, contact@vam.ac.uk) in the South Kensington area of central London, United Kingdom. We were hesitant because we normally don’t care for decorative art, but Time Out London had rated it the number one attraction of a city packed with world-class destinations. We had flown in that morning and planned to go to our hotel to sleep off our jet lag before heading to the museum, which was open until 10 p.m. on Wednesdays. But our hotel was out of the way and we decided to head directly to the museum for a few hours. It had one of the world’s largest and best collections of its kind, with 4.5 million objects, only a tiny fraction of which could be displayed at one time in its 145 galleries spread over seven miles on six levels. They included ceramics and glass, textiles, furniture, sculpture, metalwork, drawings, photos, jewelry, and costumes from around the world covering 5,000 years.

It was founded in 1852, the year after the Great Exhibition, a world’s fair that showed off the fruits of the industrial age and provided the museum’s initial collection. First called the Museum of Manufactures, it was the world’s first devoted to “applied art and science,” and the official opening at the current location was overseen by Queen Victoria in 1857 (her last public appearance was in 1899 at the laying of the foundation for a new building). 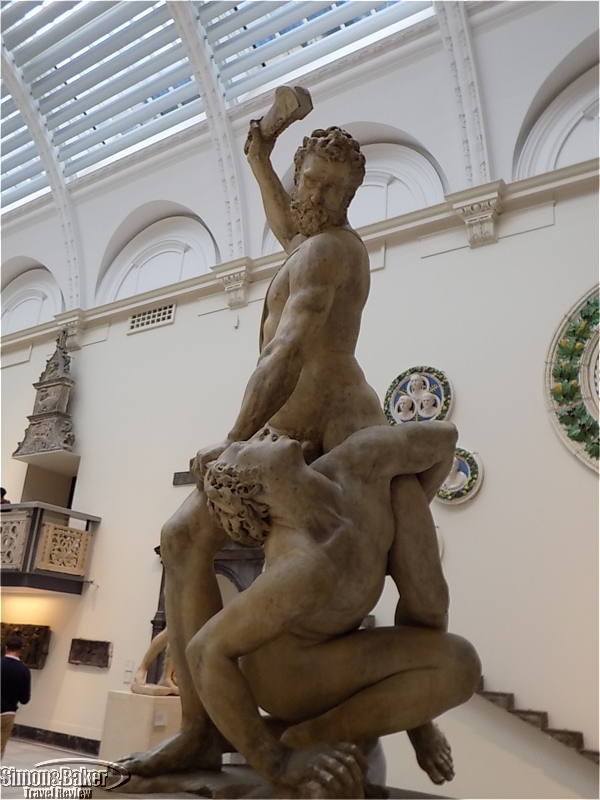 Walking into the central sculpture hall on the ground floor we were greeted by the dramatic marble statue of Samson Slaying a Philistine by Giovanni Bologna (also known as Giambologna) dated about 1562. He was sculptor to the Medici dukes of Tuscany and the most important one after the death of Michelangelo in 1564, until the emergence of Gian Lorenzo Bernini in 1614. Renaissance works dominated the long room. The VAM had one of the most comprehensive sculpture collections from the post-Classic era, with 22,000 from around the world created between 400 A.D. to 1914, using materials ranging from wood to bronze.

Islamic art was represented with 19,000 objects, one of the world’s largest collections, with works from the 7th to 20th centuries. We were particularly impressed with the rugs and tile art, with the artistry honed for nearly a millennium within the mandate of not depicting human or animal forms (except in the Persian Shiite tradition). We saw that up close on the Taj Mahal in India and in Uzbekistan, where floral and abstract forms were perfected. The VAM lighting in that area made it difficult to take photos, but we did get one of a glazed glass basin from Iznik, Turkey, 1545, with the Golden Horn design (a reference to the waterway off Istanbul). Some believe the museum’s glass and ceramics collection of 80,000 to be the most comprehensive in the world. 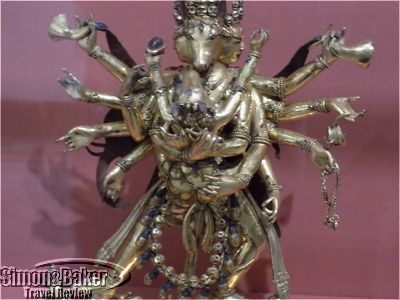 With 160,000 items, the Asian collection may be the largest in the West. We only saw a small part of it, but particularly loved the exquisite gilded brass statuette of the donkey-headed, many-armed Tibetan Buddhist deity Kharamukha Samvara, a metaphor for enlightenment in the Tantric tradition of channeling sexual energy. The male aspects represented compassion, the female wisdom. 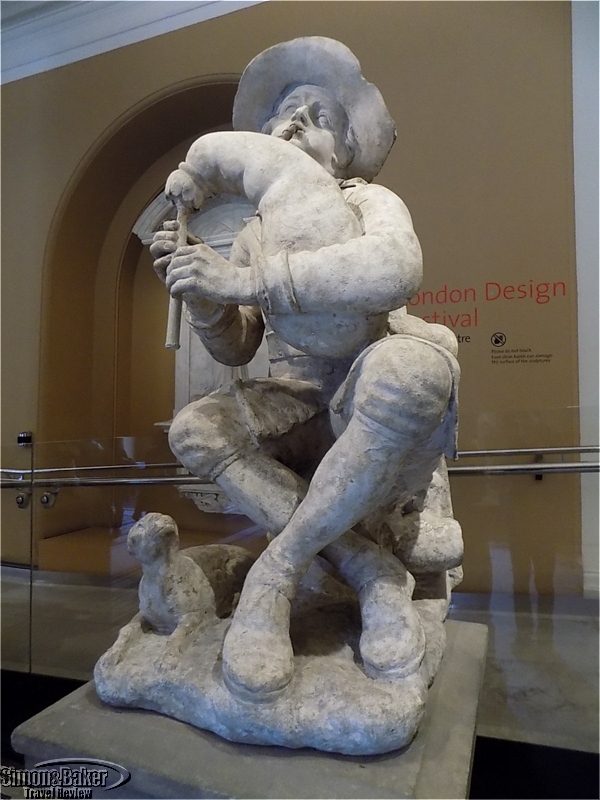 Boy with Bagpipes by Caius Cibber

We visited the room with the Raphael Cartoons, sketches for tapestries displayed in the Sistine Chapel on special occasions. By that time we were exhausted and our last photo was of the statue of a boy playing the bagpipes with his dog at his feet, sculpted from Portland stone by Danish artist Gaius Gabriel Cibber in 1680. Cibber moved to London in the 1650s, where he worked closely with the legendary architect Christopher Wren. When we return to London, the Victoria and Albert will be high on our list so that we can explore the areas we breezed through and check out those we completely neglected on photography, books, furniture, costumes, and jewelry, as well as regional exhibits on Asia and the Americas. I would recommend the VAM to friends who like art museums, regardless of whether they think they will like the focus on decorative arts.