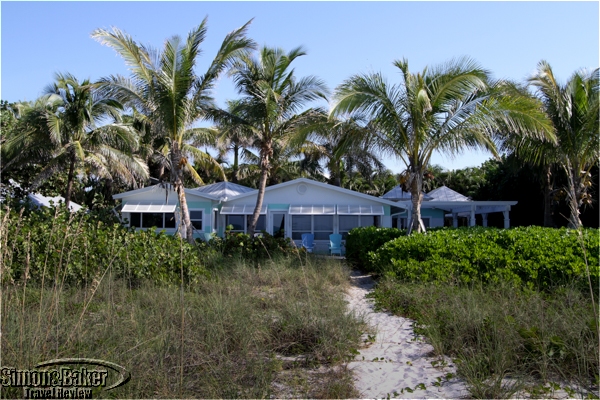 Limefish from the beach

Although we loved our Holmes Beach rental house’s beachfront location, its outstanding views of the water across lush sea oats and sea grapes from the open porch as well as from the single contiguous air conditioned living, dining and kitchen room, we were disappointed with a number of aspects of the luxury rental house. Holmes Beach is one of three municipalities on Anna Maria Island on the west coast of Florida. In addition to its outstanding beachfront place the house was on the north end of Holmes Beach, which after some exploration became our favorite part of the island along with the town of Anna Maria. It was also conveniently one block away from a complimentary island trolley stop, and within walking distance to the main shopping streets in the town of Anna Maria. 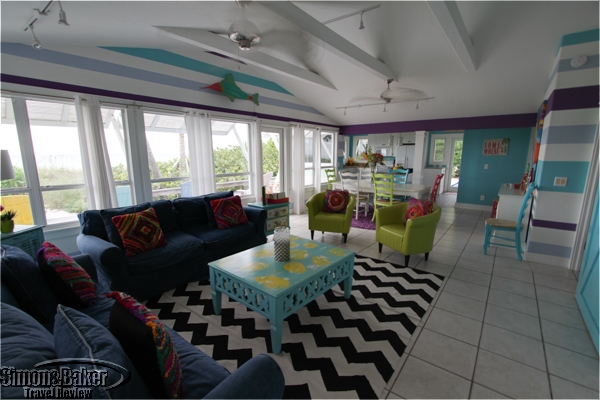 The living room featured an outstanding view of the beach

Limefish, a 1,500 square foot colorful three bedroom three bathroom house, faced the beach. The pool was on the north side and included a shady covered open air area with a propane grill, two lounge chairs, outdoor dining furniture with seating for eight and two showers. Indoors the air conditioned house was painted in bright colors. It had a master bedroom with a king bed and small en suite bathroom, a second bedroom with a queen bed and standard en suite bathroom, and a third bedroom with four bunk beds and an adjacent bathroom convenient for guests. The living area had two loveseats, a brightly painted coffee table and a built-in entertainment wall. 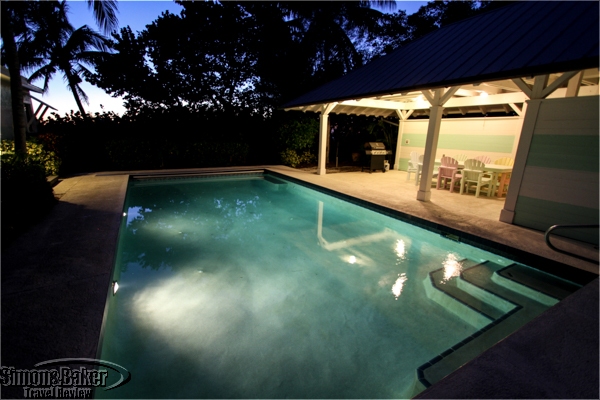 The private pool area was inviting day and night

We liked the quiet, especially indoors, and sense of privacy the home afforded us although it was sandwiched between other houses on two sides and an empty lot adjacent to a busy public beach access with parking. The muted sounds were the result of double-paned windows and a well tended garden with a narrow path that led from the back porch straight to the beach some forty feet away. The distance from the crowded beach and the garden seemed to serve as buffers. We also liked the large private heated swimming pool, an uncommon amenity in rental beachfront houses in town based on an informal tally, and the spacious parking area, which included three spaces under cover. 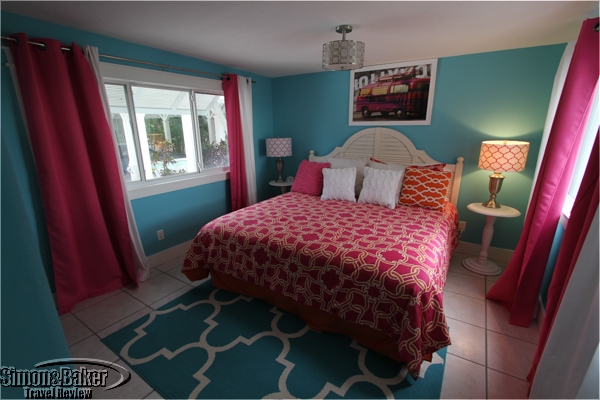 The bedrooms looked out on the driveway

On the beach, many people walked by at a quick pace. Others set elaborate groupings of chairs and umbrellas, bringing babies, children and dogs (although the beach was supposed to be dog free). Because the water was chilly few went swimming. Once we spent time on the crowded beach we particularly appreciated having private space to ourselves where we could retreat anytime and enjoy beach views in quiet seclusion. 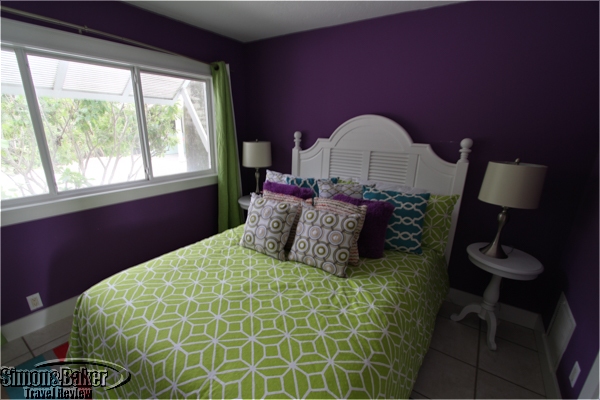 Although the company website made the rental properties look inviting there were significant errors. When we began our search for a vacation rental we encountered a number of red flags. First, there was limited information on the company website. One property appeared to have never been rented and the second one had had no reviews in more than a year. The most recent review we found said the house needed a facelift. We were unable to find details about the properties, such as terms and conditions, and availability on the rental company website. It also did not indicate when the photos of the house had been taken. 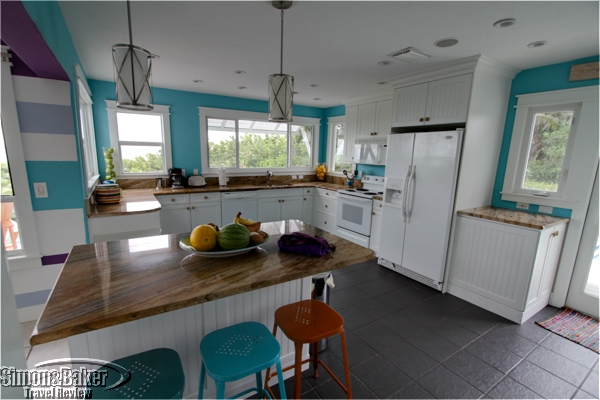 The spacious kitchen also had a beach view

After an initial email reply, the real estate agency woman was slow to respond. When reached on her mobile number she was unable to provide additional information. The first time she answered she explained she was grocery shopping. The next time she said she was visiting her daughter. Then she said she was a realtor and busy selling houses. Unlike every other person we spoke with on the island who answered questions easily and with a pleasant demeanor, her attitude seemed somewhat condescending and dismissive to us. A conversation with a second woman at a United Kingdom location was fruitless. 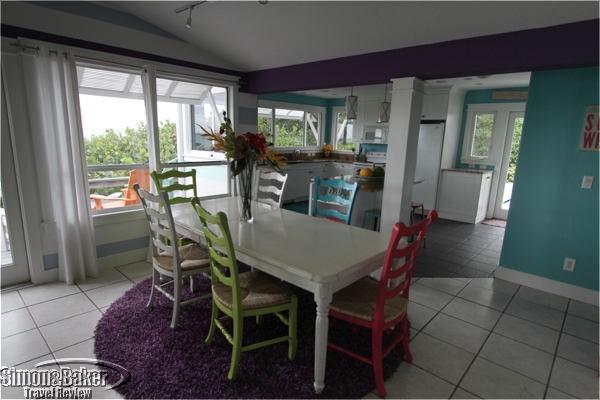 After some effort and contradictory information the company representative explained that they had made a mistake listing the first property, the one we preferred. It had a more upscale location and features. After some back and forth communication the representative said the listing with an elaborate video had been in error and the property was not for rent at all. Although it appeared for rent on the company website and was vacant they would not honor the advertised rental. The second property, she prompted, had been renovated and was available at a significant seasonal discount. 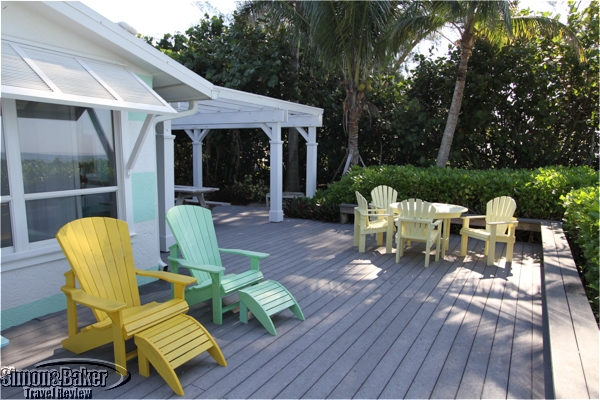 The deck and outdoor chairs were in the shade in the mornings.

We swallowed our concerns about the realtor and the property and took the bait. On arrival, the good news was that the property location was excellent. The house fronted the beach and had outstanding views from the back porch, and interior common areas. The pool, on the side of the house, was as we expected. There were however a number of disappointments, mostly the house was in a less than optimum state of repair and the amenities were of a lower quality than we had anticipated for a luxury property. We were surprised to read in the booklet with information on the house that if any equipment broke during our stay there would be no discount, only the agency’s assurance they would try to fix it. 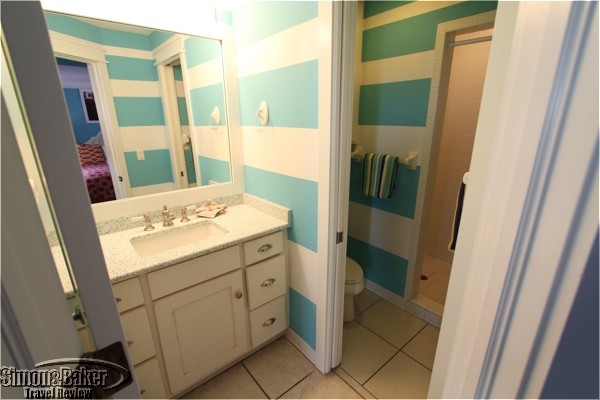 One of the things we disliked most was the six human hairs strewn in varying places (bed covers, bathroom sink, shower, facecloth, extra blanket) and the smelly mold on the washer door. The towels were mismatched, some stained and very thin. The kitchen towels were synthetic as were the pillows and bed covers. The sheets were of low thread count. The washer soap dispenser was dirty. The dryer didn’t work well at first (we discovered accumulated lint that might have caused the difficulties). The spare blanket smelled strongly of women’s cologne. 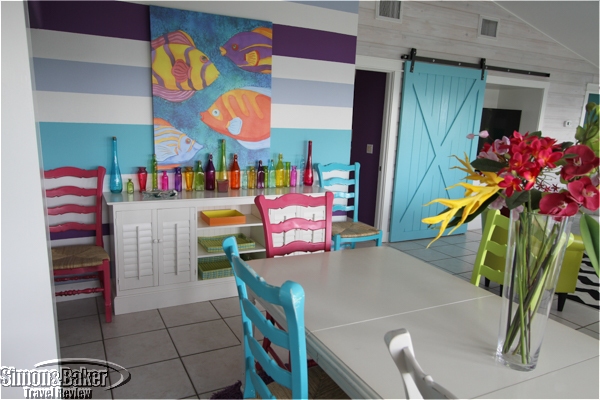 With some effort the repetitive noise of the dining and living room fans subsided. Such was not the case with the loud washer and dryer. The dishwasher door was broken. It had to be latched in place or it would fall open every time we opened it to load or unload items in the appliance. 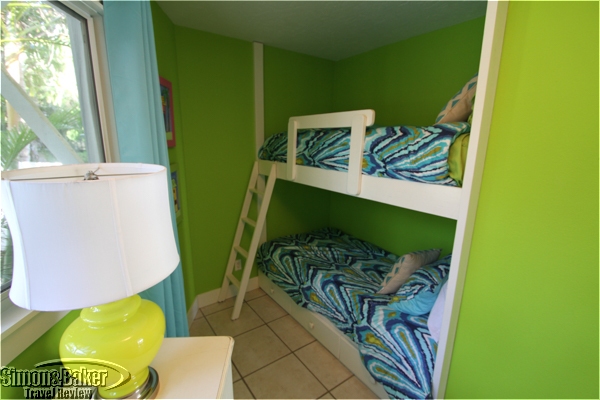 There were four built-in bunks in the third bedroom.

The colorful outdoor furniture made of synthetic material didn’t overheat, making it possible to sit on the chairs at any time of the day. But because the chairs were in a fixed position they became less than comfortable after a few minutes. There were no cushions on the chairs, which also made then less than ideal for extended lounging. There were only four beach towels for the three bedroom house, which meant if we wanted clean towels after a day at the beach we had to run the noisy washer and dryer. 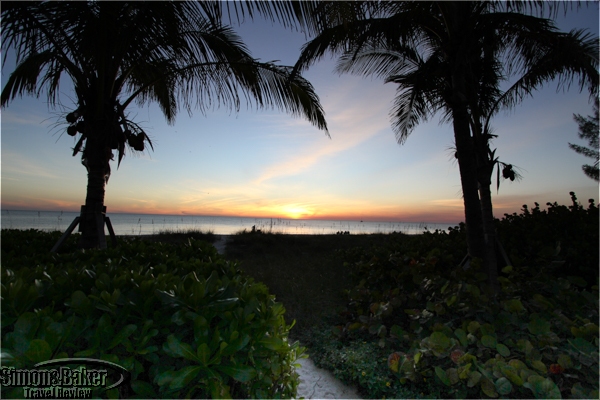 The sunsets were lovely about half the time.

By the pool there were only two adjustable lounge chairs without cushions or tables (we had to place books and beverages on the floor) and no umbrellas for shade. The lack of umbrellas or cover from the sun made it difficult to enjoy the beach facing porch in the afternoons when sunlight shined directly on that part of the house. No kitchen curtains meant sunlight covered and heated parts of the kitchen (as well as the dining and living areas) during most of the afternoon. The air conditioner and fans struggled to cool the house. 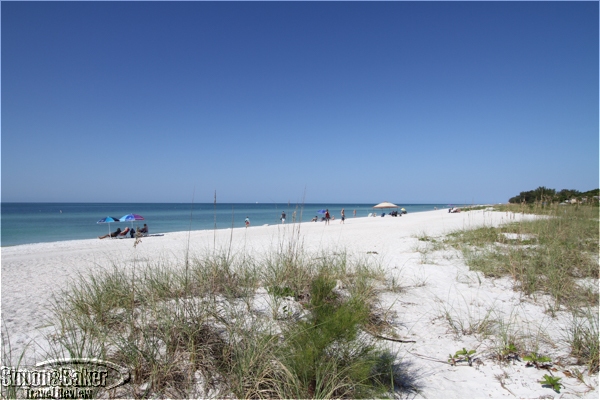 The beach was busy every day.

We enjoyed our time at Limefish as well as our first stay in Holmes Beach and Anna Maria, despite the high density of visitors during our shoulder season visit, and would consider returning. Perhaps by then the property owners and managers will have given the beachfront house some tender loving care or we can find another rental beachfront home.