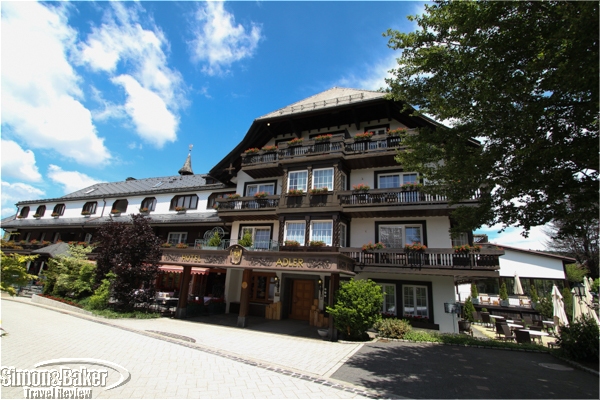 During a trip to the Black Forest Highlands of southwestern Germany, we stayed at the Hotel Adler and had dinner at the hotel’s Restaurant Adler (Hotel Adler, St. Fridolinstrasse 15, 79837 Häusern, Germany, +49 7672 4170, fax +49 7672 417150, www.adler-schwarzwald.de, info@adler-schwarzwald.de). We liked the well presented and colorful regional food with international influences and wine pairings prepared by Florian Zumkeller, the restaurant’s chef, owner and manager. 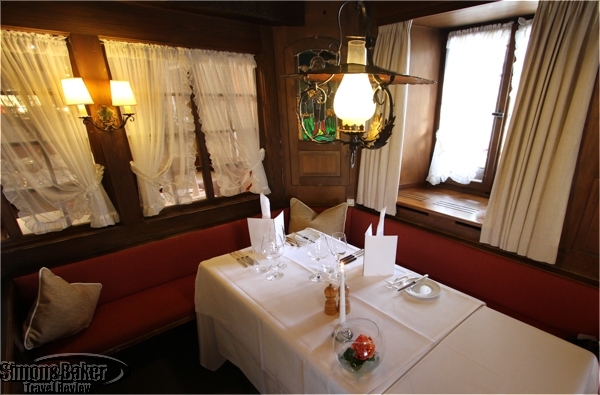 Our table was in a cozy corner with padded bench seats 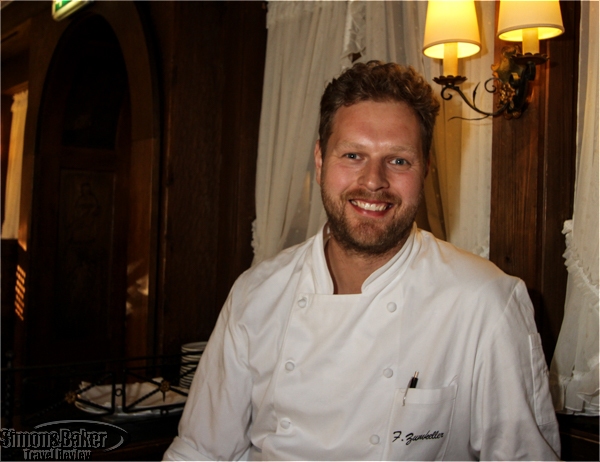 The Black Forest fine dining venue had red tile flooring, cushioned wood bench seats, a low wood ceiling and regional décor, including a large crucifix across from our table. Salient features were tablecloths and silverware as well as glassware from Schott Zwiesel and tableware from Rosenthal. The restaurant was 250 square meters in size with a staff of 12 and capable of accommodating 80 guests. Nishan, our Sri Lankan English speaking server, was friendly and attentive. 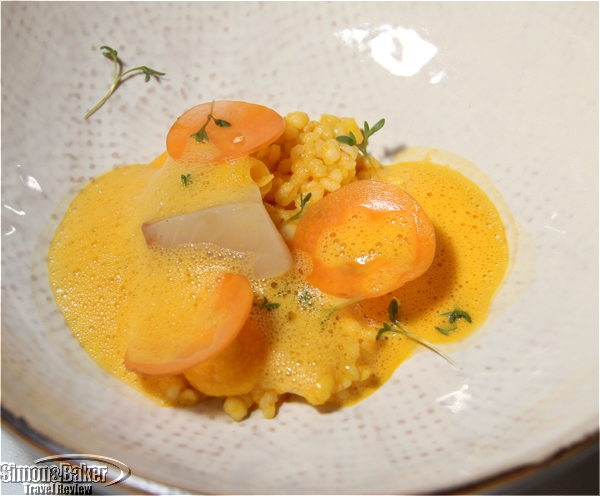 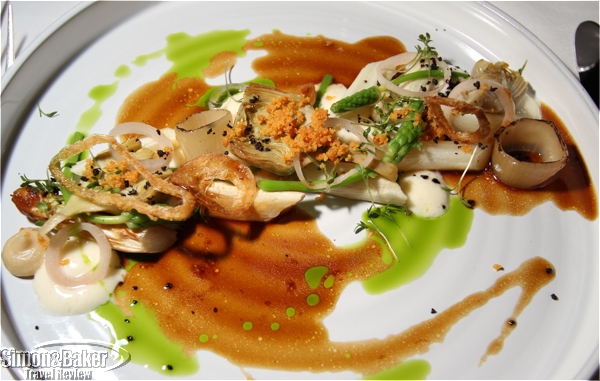 There were three types of bread on offer: onion, seeded, and baguette. Four types of butter: herb, red onion, salted and unsalted were presented on a black ceramic plate with a small fork and a spoon. The appetite teaser was a slightly sweet mackerel sashimi with an exotic flavor. To start the meal there was a veal sweetbreads appetizer with bitter salad and lemon vinaigrette (a favorite) served with 2015 Weinhaus Joachim Heger Grau Weissburgunder Cuvee. I selected an asparagus dish instead. Next there was Lobster with nectarine and pancetta served with 2014 Scherzinger Batzenberg Chardonnay Alte Reben Weingut Heinemann, Scherzinger. 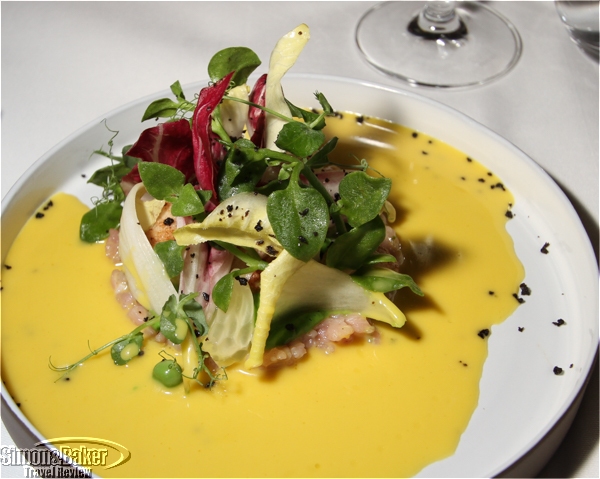 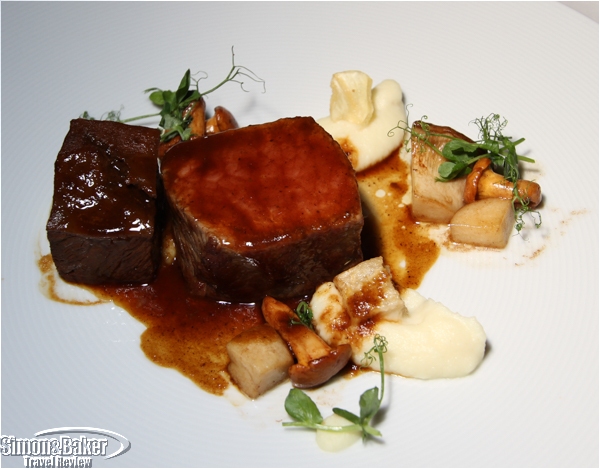 The main course was Two variations of United States beef with celery, mushroom and hazelnut

Two variations of United States beef with celery, mushroom and hazelnut, a medium rare tasty meat course, followed. We appreciated that the beef was antibiotic and hormone free. It was served with 2014 Cabernet Cuvee from Weinhaus Joachim Heger. For dessert there was Frozen tiramisu with peach and raspberry served with 2014 Durbacher Plauelrain, Traminer Auslese, Weingut Laible. After dessert there were chocolate praline balls served with Amaretto cream with almonds. 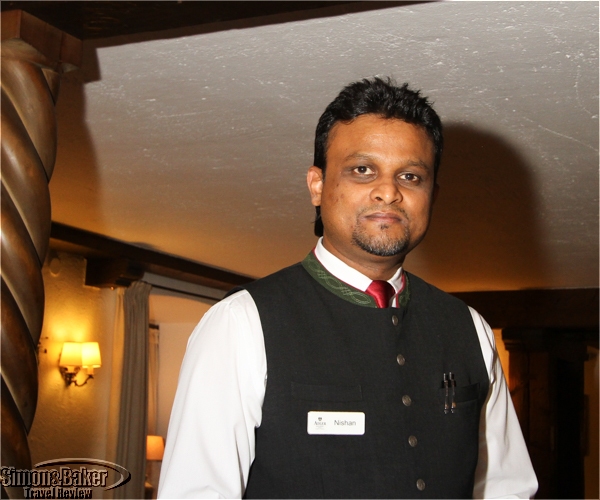 Chef Zumkeller did an apprenticeship with Alfred Klink at the Colombi Hotel in Freiburg, Germany. Before taking the reigns of the Restaurant Adler in 2011, he worked with chefs Philippe Chevrier at Domaine de Châteauvieux and Adolfo Blokbergen at L’Auberge du Raisin. 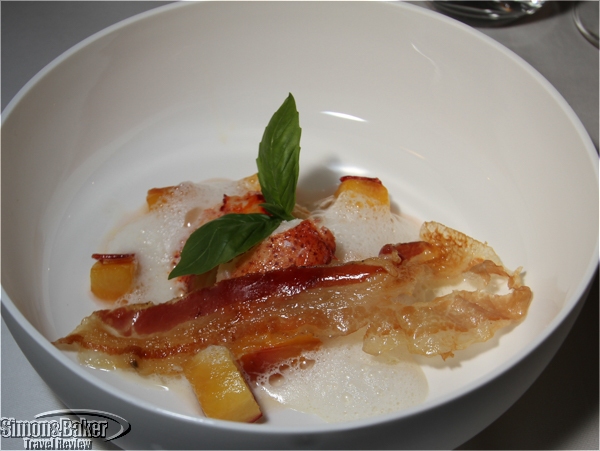 Lobster with nectarine and pancetta 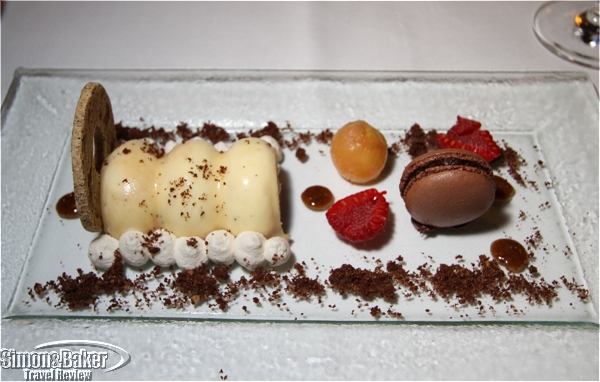 Frozen tiramisu with peach and raspberry

He proudly explained, when we met him at the conclusion of our meal, that for 50 continuous years, since 1966, the restaurant had received a Michelin Star. Should we be in Hausern again, the restaurant’s gourmet dinner with a touch of innovation and good service in a traditional Black Forest dining room would tempt us to return.