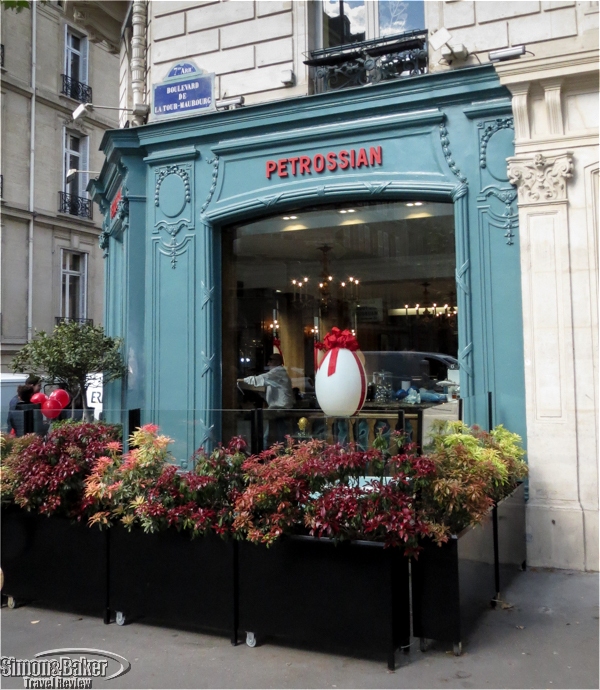 Ever hear of Daurenki Impérial, Baika Impérial, Ossetra Impérial, Alverta Impérial, and Beluga Impérial? If you are a foodie you may already have an idea of what the names are, the types of farmed caviar some of which we tasted at the popular Petrossian Latour boutique in Paris, France owned by Armen Petrossian (18 boulevard de la tour Maubourg 75007 Paris, + 33 14 411 32 22, www.petrossian.fr, boutique@petrossian.fr).

Philippe Vanlacker described the types of caviar before we tasted them

On a cloudy spring morning we made our way, braving streets filled with protesters and police, to the Petrossian shop in the city’s Latin Quarter, where we sampled various products. Philippe Vanlacker, a friendly English speaking staff person, welcomed us and facilitated the caviar, Royal Salmon, and Kamtchatka Crab tasting. We liked that the only added ingredient was sea salt. There were no preservatives or additives, according to a spokesperson.

A kilogram of fine caviar

The caviar we tried, made from fish eggs and sea salt only, came from China, France, Israel, United States, and Bulgaria. The farmed salmon was from Scotland and the crab, previously frozen, was from Russia. The shop, about 600 square feet in size and staffed by eight people, appeared to be mostly for takeout purchases although it also had a few tables and a limited menu for customers wishing to have a light dish onsite. Our entire tasting was conducted while we stood facing the waist high counters without beverages of any kind.

When we asked about the advantages of a store tasting a spokesperson explained by email, “When somedy (somebody) bring caviar home, it means that the man or the woman wants to seduce his/her partner or guest. But most of the time, he/she doesn’t know if they will like it. When they taste in the boutique, the can choose the caviar they have prefered (preferred) because they can taste differents (different) caviars. This is the big difference between internet, the others caviar houses and Petrossian: it’s the only place where you can taste the caviar before buying it.” 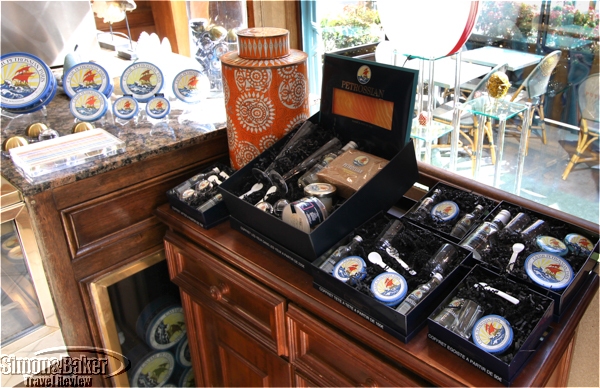 There were gift packages to accompany the caviar

Established in 1920 the shop draws local and international visitors the staff explained, saying that many people visit the boutique like a museum and stop to take photos. Some of the staff, including Joseph, Lorna and the owners, have been there for more than 30 years. Everything in the boutique is homemade and fresh, a spokesperson explained by email, adding, “Tourist come from all around the world because they know Petrossian. They want to bring back home a little souvenir, a little gift, and most of the time, they choose caviar because we offer them a cool bag with dry ice inside and they can travel with it.” 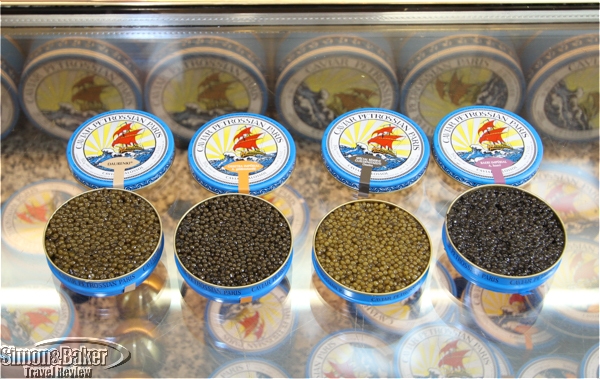 We liked the opportunity to sample the delicate products with the guidance of experts so that the caviar we tasted was at just the right temperature and optimum conditions. Too warm and the flavor is spoiled, too cold and it fades, the shop employee explained. The ideal temperature to taste caviar is between 6 and 8 degrees Celsius, he said. Being able to compare and contrast the nuances from one type of caviar to the other was an added advantage as it allowed us to form an opinion from the single tasting serving without having to purchase and prepare a tasting at home. 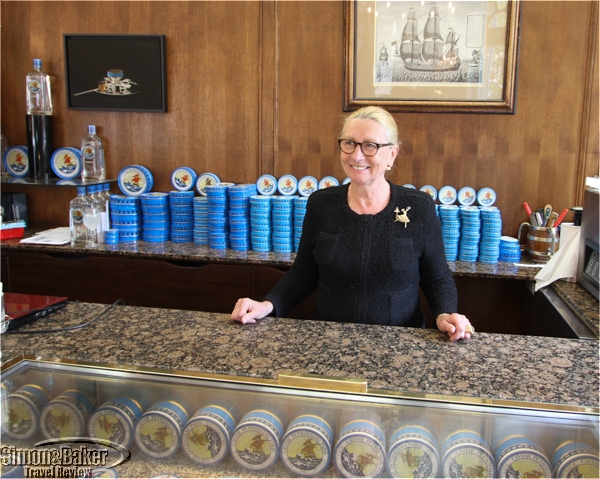 We began the gourmet experience, under the supervision of Cécile Petrossian, Armen Petrossian’s gracious and elegantly attired wife, with caviar. While we watched our host pulled out tins from the glass counter before us, explaining the basics about the caviar, which was between eight and twelve months old. He used a special key to open the large cans such as a two kilo Ossetra Reserve container filled with plump sturgeon eggs he showed us before retrieving our sample from a small tin. Philippe handed each of us one serving of several types of fish eggs on disposable wood sticks, explaining wood and mother of pearl are commonly used to avoid distorting the delicate flavor with metal spoons. We were surprised at the slight variations in color, texture and taste of the caviar samples, light and smooth yet each with a distinct characteristic. One was dark, almost black with a hint of fish and salt. The Ossetra Reserve was dark gold and more defined. The Ossetra Impérial eggs were firmer than the Ossetra Reserve with a more pronounced flavor. And the final sample, also with a gold hue, reminded me of the sea yet had a fattier yet subtle taste.

At the conclusion of the caviar sampling, we crossed to the opposite end of the shop to the salmon counter, where we sampled several flavors such as Caucasienne, Nature, and Bettrave. All were buttery in texture and seemed to melt in the mouth. Philippe explained their salmon was smoked and aged hanging so the excess fat could drip naturally and allow the remaining flavor enhancing fat to cling to the fish, lending it a rich yet understated taste and texture. We sampled the salmon “tenderloin” in three flavors. The Nature salmon was just that natural. The Caucasienne was prepared with a rub of 12 spices. And the Bettrave was colored with beetroot juice, which made it look like raw tuna. To crown the experience Philippe handed us a bite of Kamtchatka Crab followed by a dollop of the house tarama (fish egg spread).

Several varieties of salmon, some with special marinades like beet root 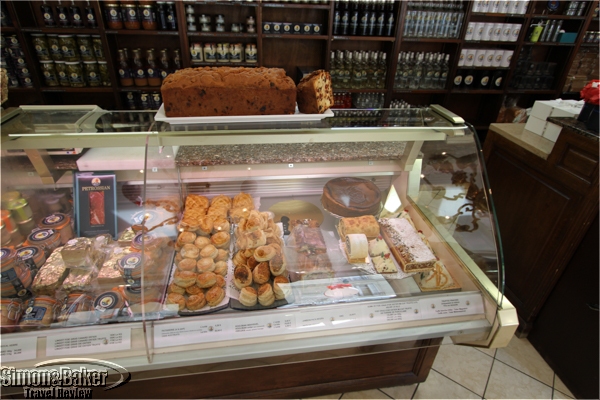 There were prepared specialty foods

We liked the shop’s caviar and salmon selection and expertise and will recommend it to friends wishing to taste the specialty foods in a gourmet environment. The staff’s warm service in English enhanced the experience and would draw us back easily.