Our stay at new Courthouse Hotel-Shoreditch in London 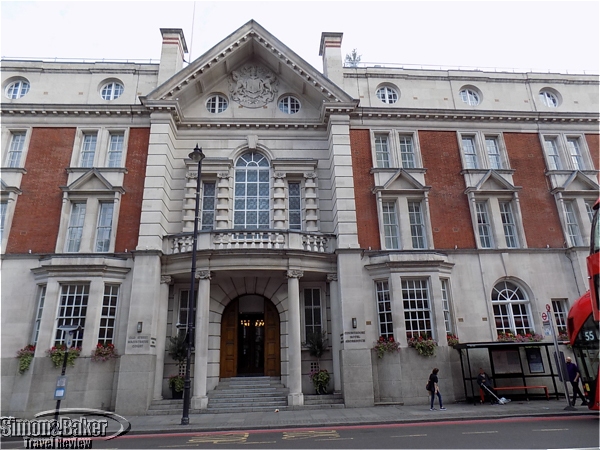 The Courthouse Hotel-Shoreditch, built as a courthouse and police station in 1903, was recently restored and opened as a hotel.

In September 2016, just four months after its soft opening and while it was still adding features and functions, my wife, Sandra, and I spent two nights at the Courthouse Hotel-Shoreditch (337 Old Street, London, EC1V 9LL, United Kingdom, +44 203 3105555, www.shoreditch.courthouse-hotel.com, shoreditch@courthouse-hotel.com) on the cusp of northeast London, United Kingdom. The hotel, the sister property of the five-star Courthouse Hotel in Soho, was established in the former Old Street Magistrates’ Court and Police Station (1903-96), a few blocks from the Old Street Station of the Northern Line of the Tube (subway). 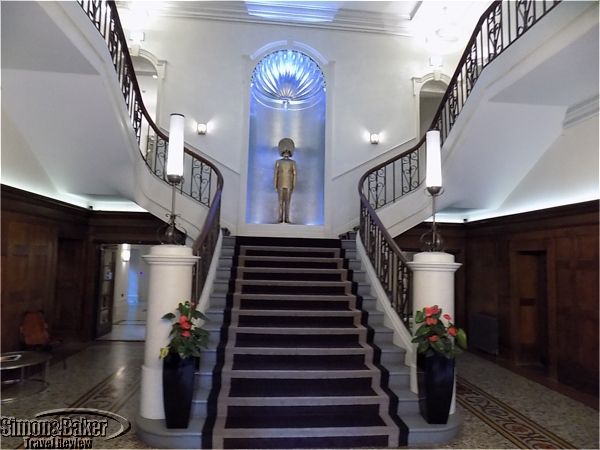 The restoration of the Baroque-style courthouse and station cost £40 million (about $64 million). The lobby provided an impressive welcome with its marble floor, grand stairway guarded by a golden statue of a soldier, and a clean and sparkling redesign. Although top hotels usually have employees eager to help, the ones we encountered at Courthouse Hotel-Shoreditch were exceptional in their friendliness and helpfulness. Although we arrived early in the morning expecting to leave our luggage with the concierge while we headed to the Tower of London, our room was ready and our first requests received immediate response.

We liked that the multi-lingual staff provided an overview tour of the facilities, and after we returned there was a more in-depth one. Not everything was fully functioning: the main restaurant was due to open soon, spa services were limited, and Internet access was available only at the front desk until the business center opens. We like to experience the emerging hot properties before everyone else discovers them, so the stay was to our taste. 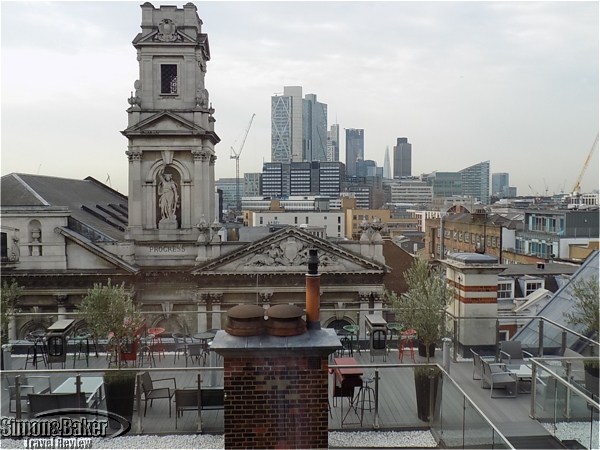 From our sixth floor we looked out over the rooftop dining area and the historic Shoreditch Town Hall across the street, housing restaurants and a theater at the time of our visit.

Our sixth floor room looked out over the outdoor dining area on the fifth floor roof, directly across from the Shoreditch Town Hall, built in 1866 as a vestry, a building attached to a church used to store vestments and liturgical objects, with halls in which church and public meetings can be held. In 1888, it was the site of the inquest into the murder of Mary Kelly, Jack the Ripper’s last victim. The following year, the suburb was incorporated into the county of London, and in 1899 it became a metropolitan borough of London, with the town hall in operation until 1965, when the area was incorporated into the Hackney Borough. Shoreditch had been popular in the 16th and 17th centuries as a place for theaters, gambling dens, taverns, and brothels. When we were in London it had an edgy hipster reputation with abundant street art, galleries, nightclubs, and restaurants (the former town hall had some activities on offer, as well as a theater and event space. For more, check out the Top 10 Things To Do in Shoreditch (theculturetrip.com/europe/united-kingdom/england/london/articles/top-10-things-to-do-see-in-shoreditch/). Past area residents have included the playwright Christopher Marlowe and Shakespeare’s lead actor Richard Burbage, who is buried in the church. More recent ones have been artist Damien Hirst and actor Richard Brand. 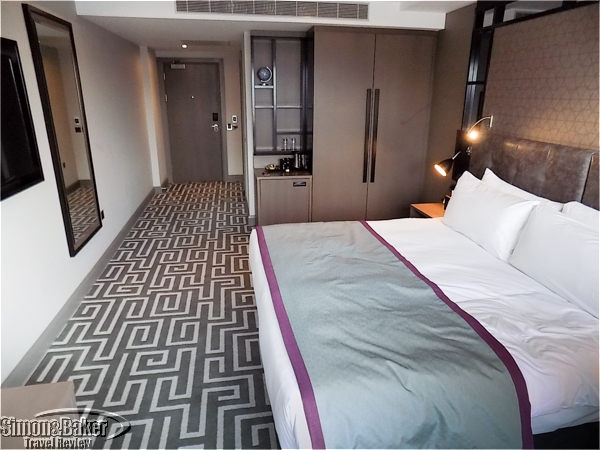 The Dalston King room was 26 square meters in size and had a comfortable bed.

We stayed in a Dalston King room, the first of three types of 86 guestrooms (the others were Magistrate King and Xscape). At 26 square meters (280 square feet), our room provided enough of space for the two of us. The bed was comfortable enough; though we prefer a slightly softer mattress and pillow, we slept soundly, which was all that mattered to us. Despite the nightlife in the area, our room was free of street level noise (finding a hotel in a quiet area has proven difficult in central London in the past). The insulation was also enough to keep us from being bothered by neighbors.

The best in-room feature was the Samsung 46 inch flatscreen hi-definition LED TV. It was larger than those at the other three hotels where we stayed and the only one that offered CNN. The television remote wasn’t responding, but that was a good test of the service: we called twice and had immediate responses. The first time the front desk sent someone who moved some wires in the back, which worked for a while. The second time, two technicians spent half an hour to provide a permanent fix. We also heard good things about responsiveness from other guests.

Our room had a desk and a table with chairs, plus bottles of sparkling and still water (other hotels provided two carbonated ones, so it was nice to have a choice). The small refrigerator was not yet being stocked as a mini-bar. We appreciated the fresh cream and good grade of instant coffee. The room had the usual upscale amenities, such as an iron and board, robe and slippers, and safe. Something we had never seen before was hangers with built-in lights so that at night or early in the morning we could see our clothes. We appreciated having a window that opened for fresh air (something top urban hotels sometimes lack), and we also liked the easy-to-use temperature controls. There was turn down service at night, but we declined. 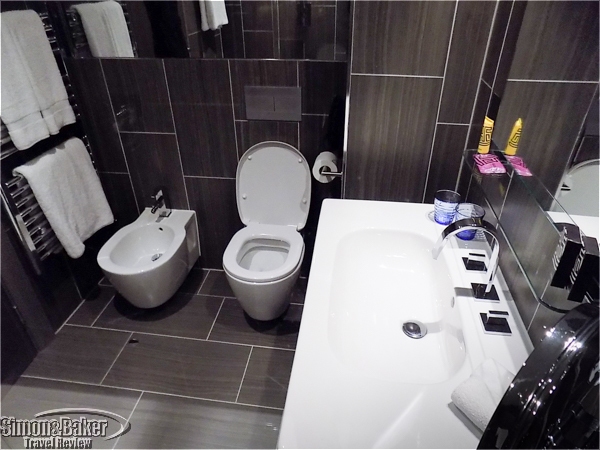 The bathroom had a bidet, the first we have seen in a luxury hotel.

We’ve reviewed many leading hotels and don’t ever recall one that had a bidet, evidence of management’s interest in attracting the international audience that shares French culture. We wanted to know how it worked. Although the drain was stuck it was fixed right away. The phone by the toilet was well-positioned. The counter space for makeup was larger than many hotels where we have stayed, but the lighting on the makeup mirror and overhead wasn’t as bright as it ideally should be (a weak area for even the best hotels). The shower had two nozzles that were easy to use: the standard showerhead and one for the overhead rain effect, which was pleasant. 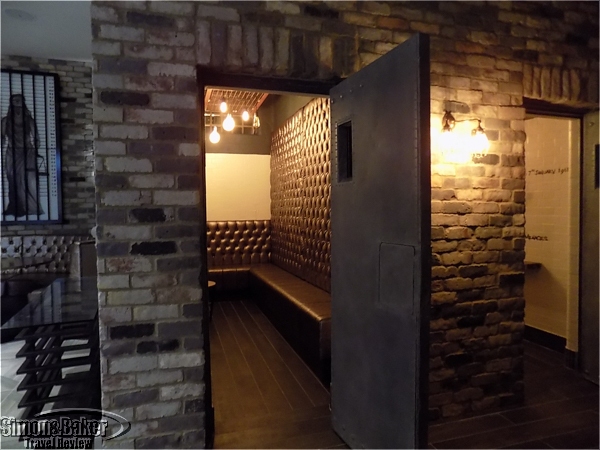 The bar had semi-private rooms that formerly were jail cells.

The hotel retained some of the architectural features of the original building. In the breakfast dining room we saw signs of its use as a law library. The bar had several semi-private 5 by 15-foot rooms with reinforced metal doors. Those were originally holding cells which hosted the likes of East London gangster twins Ronnie and Reginald Kray. 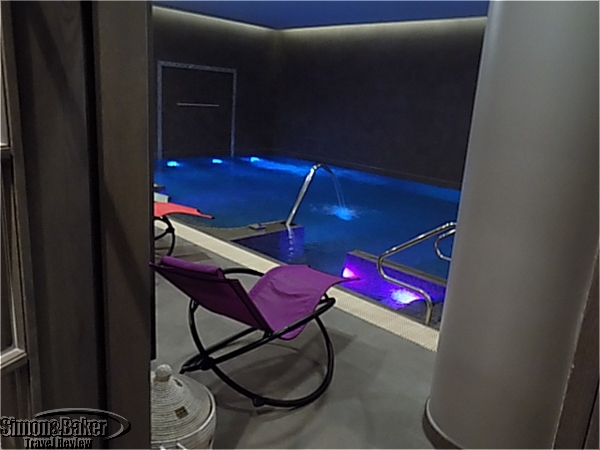 The hotel had a large, heated indoor pool.

There was a small gym with equipment for cross-training, cycling, and weightlifting and a four-lane heated indoor pool with current. Like the original Courthouse, the hotel had two rare features, a private movie theater with capacity for 196, including armrests and foldout tables for a planned film club, as well as a two-lane bowling alley. Bowling was one of those sports the city people came out to Shoreditch to engage in hundreds of years ago, so it was fitting for the location. 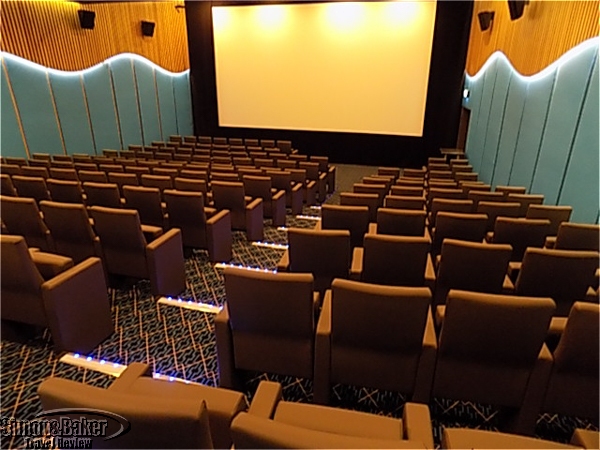 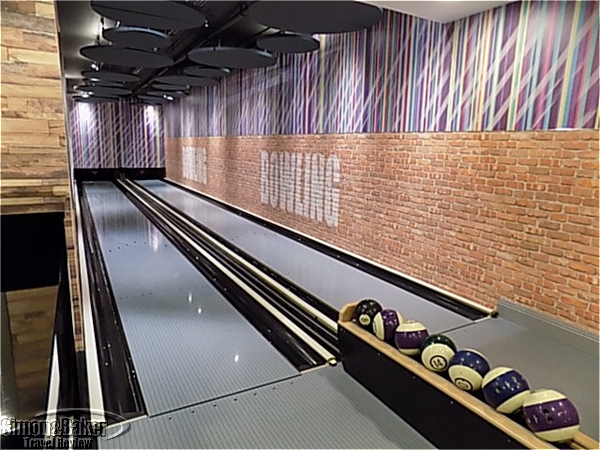 The bowling alley fit in with Shoreditch’s history.

We liked the unusual features of the Courthouse Hotel-Shoreditch and the responsiveness of the staff. When it is fully functioning I would consider it among my top five choices for a different hotel experience on a return trip to London.