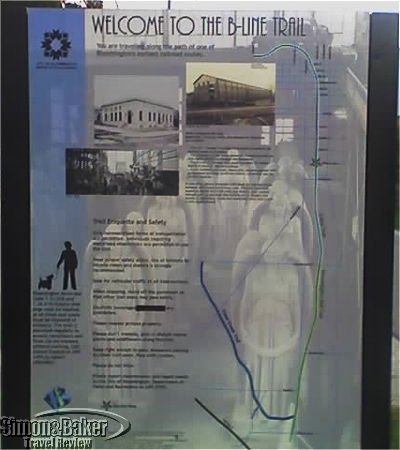 Signs along the trail described its history

During a recent stay in Bloomington, Indiana I discovered the B-Line Trail, a 12 food wide asphalt, multi-use 3.1 mile pedestrian and cyclist pathway, when I asked about jogging near my centrally located hotel. Meetings and activities kept me busy the majority of the days and into the early evenings. Taking advantage of the little free time I had at my disposal in the early mornings I set out to explore as much of the trail as I could. 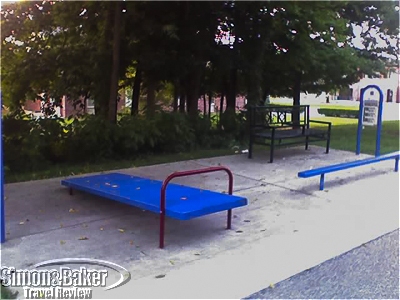 One of five different exercise devices in three fitness stations on the trail, south of First street

It ran from the east side of Adams Street, through downtown, past the switchyard property, to the north side of Country Club Drive. It had well marked ground level street crossings at the intersections. Many of the cars stopped or slowed down when they saw pedestrians at the crosswalks. There were pedestrian bridges over Third Street and Grimes Lane. There were paved plaza areas next to City Hall, at the WonderLab Museum, behind the Convention Center, and at Seminary Square shopping center. There were exercise stations, benches and public art scattered along the trail, especially near the downtown section. 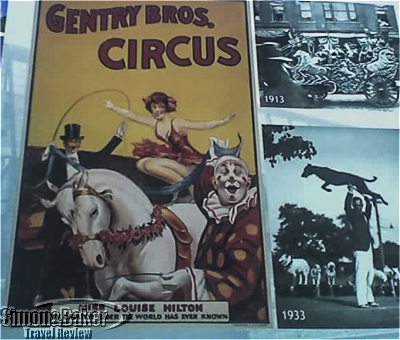 There were signs highlighting spots along the trail

Perhaps because of the summer break it was a bit lonely jogging in the predawn hours. Some of the graffiti peppered under bridges and abandoned buildings spooked me at first. As the sun rose, there were more people cycling, walking, jogging and walking their dogs. Some took advantage of the two foot wide gravel shoulders on each side. 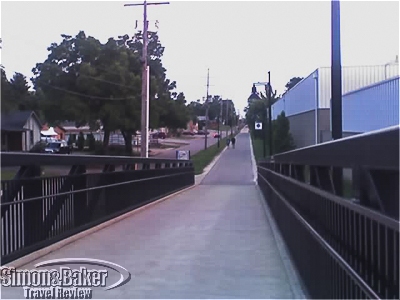 Every so often there were garbage bins, bags for dog poop, and new looking LED street lamps on the trail. Even in the area furthest from downtown Bloomington it was never dark for very far on the path. Along the green sections, bird song mixed with the background buzz of early morning traffic and the mechanical sounds of nearby construction. Every once in a while I spotted birds. One mornings, I saw a rabbit next to the trail. 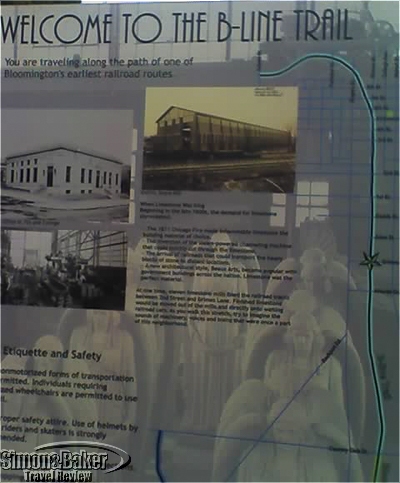 One of many signs that marked the trail path

Signs described the project, which was accomplished by the city through land acquisition for the three-mile former rail corridor (most of the costs, 80 percent, were funded by federal grant dollars). Other signs highlighted historical landmarks and public art. There were eight art pieces on the trail. I noticed a weathered steel sculpture titled “Dancing Spirit” near downtown. Some of the buildings I passed had murals made possible by a city grant.

Every morning I looked forward to my walks and jogs on the trail. They allowed me to exercise and discover a little of the city and its history, including some brush and greenery. On the path, I came across a convenient grocery store and a small cafe where I bought nutritious and tasty smoothies. The next time I visit Bloomington, I will seek accommodations near the B-line Trail. Perhaps by then the Swityard Park project will be complete.