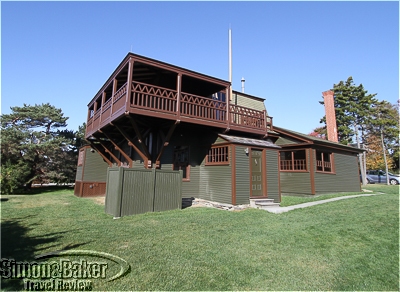 American painter Winslow Homer (1836-1910) lived and worked on many of his masterpieces from 1883 until his death in Prouts Neck, Maine where he enjoyed dramatic views of the ocean crashing against the rocky coast, which inspired his famous artwork, and some believe transformed marine painting in American art. Last fall, while staying at the Inn by the Sea in nearby Cape Elizabeth, Maine, we had an opportunity to stop by the Winslow Homer Studio (http://www.portlandmuseum.org/homer/visit, +1 207 775-6148), his former home and studio in Prouts Neck, about 12 miles from Portland, now restored and part of the Portland Museum of Art in Portland. 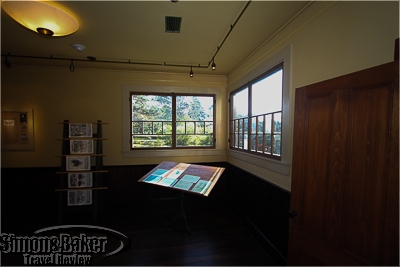 Worktable with a view located in the studio (click to enlarge)

The building was moved 100 feet away from the “Ark,”  the house next door, and converted from a carriage house to living quarters in 1883 by John Calvin Stevens, an architect, and his brother-in-law Howard Stevens, of the Portland firm Fassett and Stevens. In 1890, Homer had the porch, pergola and a painting room added. Today, the Studio is 2,200 square feet, 44 feet by 53 feet, and two stories high. 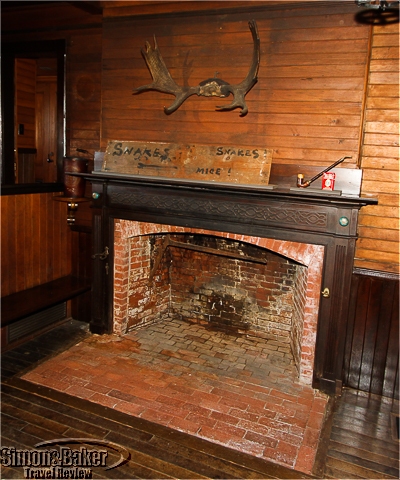 The fireplace with a few original touches

Few original items remained at the time of our visit. They were: a bench called an Inglenook, a detail common in architect John Calvin Steven’s homes; his fire bucket (with initials W.H.); moose antlers over the mantle; the sign he made “Snakes, Snakes, and Mice” that he put outside, as he said, “to keep away the rusticators;” his pipe and tobacco, his copper kettle, and his chair. The wooden mantle and the fireplace were painstakingly restored to their original state. 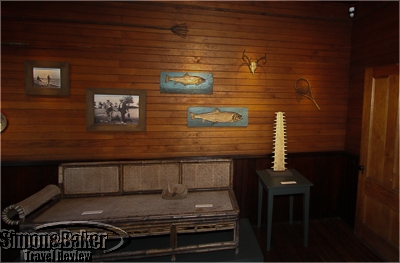 The daybed and wall mounted trophies (click to enlarge)

By the main living room north interior wall, there were items belonging to Winslow Homer: daybed, fish trophies, fishing pool, eel spear, and sawfish bill. The museum added reproductions of photographs of the artist and his family and a facsimile of a family album to illustrate the story of Homer’s everyday life at Prouts Neck. Museum staff believed that in the painting room west window and south interior wall a Chinese table, and props from paintings hint at the lush interior of Homer’s New York apartment, and provided a contrast to the rustic nature of his life at Prouts Neck. Items from his Studio, a bell and an octant, as well as a medal Homer received from the Carnegie Institute, decorated the tabletop dating to 1896. 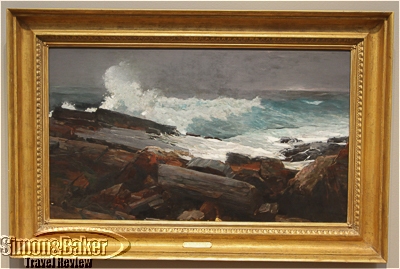 Weatherbeaten from the Portland Museuam of Art (click to enlarge) 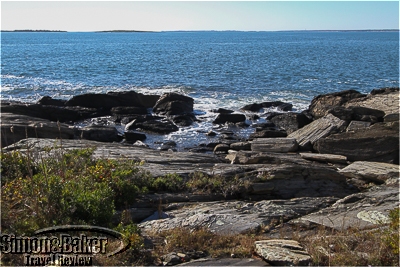 The coast, a short distance from the studio, was the inspiration for Weatherbeaten (click to enlarge)

Inspired by the rugged beauty and dramatic weather of Prouts Neck Homer produced works that revolutionized marine painting in American art and created an iconic and enduring image of the New England coast. The Portland Museum of Art’s painting Weatherbeaten from 1894 served as the namesake for the exhibition and a quintessential example of the artist’s late work. Museum staff believed the image of rough waves crashing against a rocky shore embodied Homer’s ability “to capture the specificity of a place, while simultaneously meditating upon the timeless forces of nature.” 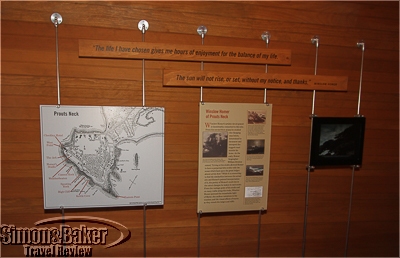 One of the display areas had information about the area.

According to a museum representative, in the artist’s Prouts Neck pictures, he envisioned nature as an arena for the constant clash of forces, water against rock, and humankind against the elements. In Eight Bells, 1886 painting displayed at the  Addison Gallery of American Art, Phillips Academy, for example, he represented fishermen facing stormy weather at sea with Homer’s characteristic narrative ambiguity that experts believe leaves the viewer wondering about their fate. Homer’s iconic painting Fox Hunt from 1893, which rarely leaves the Pennsylvania Academy of Fine Arts, was expected to make its first visit to Maine since its creation. Experts who consider it a masterwork say it “thematizes mortality and evolutionary conceptions about the survival of the fittest that arose in the late 19th century.” 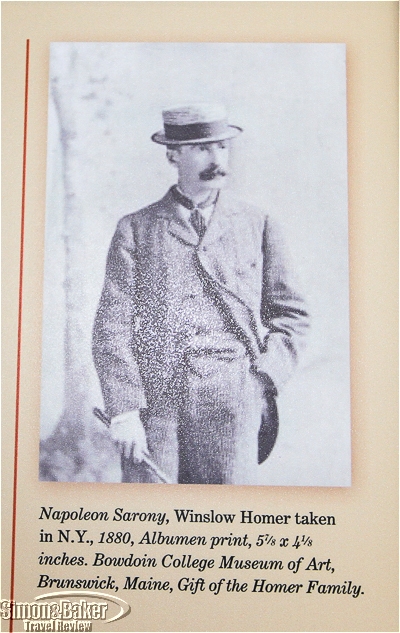 A reproduction of a photograph of Winslow Homer at the Studio

In 1893, Homer first exhibited at the Portland Museum of Art. In 1976, Charles Shipman Payson pledged his collection of 17 paintings and watercolors by Homer and an endowment that led to the construction of the Charles Shipman Payson building, the public face of the Museum. The Museum’s Homer collection also included such notable objects as his first important oil painting, Sharpshooter from 1863; an original watercolor paint box; and a significant collection of 400 wood engravings that represented 90 percent of Homer’s graphic output, and chronicled the artist’s early career as a commercial illustrator. 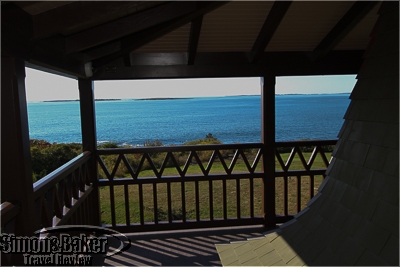 A view from the upper floor (click to enlarge)

Following the purchase and restoration of the building, a National Historic Landmark, in 2006, the museum opened the Studio to the public in 2012. In 2014, the museum, the Prouts Neck Association and the Scarborough Land Trust bought the land, a little more than half an acre, surrounding the Studio with the goal of conserving it in perpetuity as open, undeveloped space. The museum showcased three centuries of fine and decorative arts from the 18th century to the present, including renown artists such as Winslow Homer. Winslow Homer Studio tours, two and a half hours long, were available for up to 10 visitors at a time by reservation only. The tours departed from the Portland Museum of Art in a Mercedes Sprinter van.