What made Malawi memorable for me 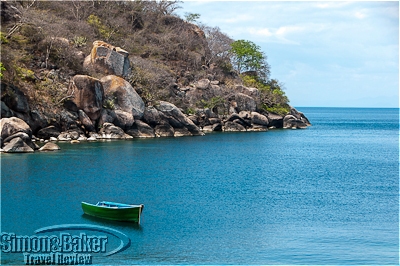 The view from my tent at Mumbo Island

When I first heard of Malawi, in the earliest days of my love affair with Africa over a decade ago, I confess that I had to consult an atlas to locate the small landlocked country wedged into the southern end of the East African Rift Valley. Less than 900 kilometers (560 miles) from north to south and barely 160 kilometers (100 miles) at its widest, Malawi was overshadowed by its much larger neighbors, Tanzania to the north, Zambia and Mozambique to the south, east and west. It was, and remains as of this writing, mainly unnoticed by international tourism travelers. Yet this narrow strip of rugged terrain carved by the Great Rift Valley is rich in spectacular vistas and home to several national parks, and of course Lake Malawi, known by the most passionate divers and water sports enthusiasts. It is the third largest of the African lakes, and for some arguably the most beautiful. 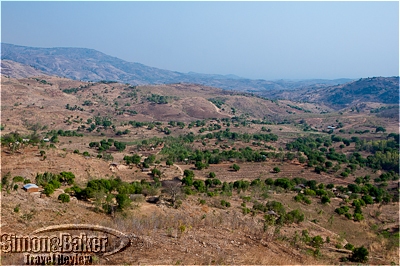 Great swaths of the country were used for subsistence agriculture

It is also one of the poorest countries in Africa, and one for whom the development of a viable tourism industry is an important growth and indeed survival factor. It was this opportunity to have it all, to visit, and through that support a country in the early stages of modern development as well as enjoy a safari off the beaten track, and experience a remote tropical beach environment known by many in the region, but rarely visited by international travelers, all within a few hours’ drive that made Malawi an irresistible destination for my most recent African visit. 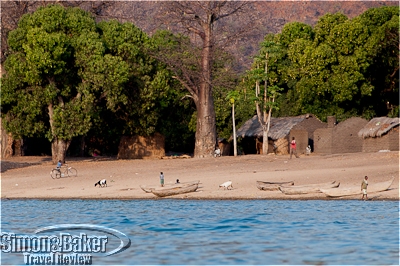 The shores of Lake Malawi were dotted with fishing villages

Reaching Malawi had its challenges. With a population of 16 million living mainly in rural areas, and an economy largely based on subsistence agriculture, it is one the least developed countries in Africa, with only the most rudimentary national infrastructure. And what of the tourism infrastructure? I needn’t have worried. A few forward thinking properties have established themselves in recent years, ranging from unabashedly off the grid to luxury class, in the most desirable tourism destinations in the country. Each had a unique personality that was just right to ensure optimum enjoyment of it surroundings. One constant however, throughout my visit to the peaceful little country was the warm welcome of the gentle people of Malawi. 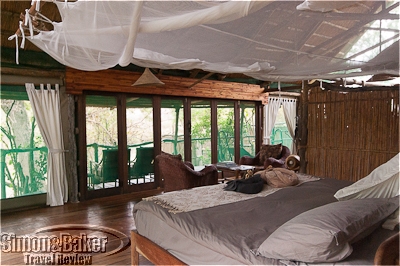 From a luxury safari perspective, Malawi is for people who want a bit of real world authenticity with their posh African safari.

Mvuu Lodge in Liwonde National Park, considered the premier park in Malawi for its large population of hippos and elephants and its abundant bird life,  offered intimate wilderness tented accommodations with a casual atmosphere and the creature comforts I have come to expect from a luxury safari property. Ideally located at the edge of a secluded lagoon across the Shire River from the park entrance, it could be reached only by boat. The open sided main area was raised high into the trees for a sweeping view of the constant wildlife activity along the lagoon. The riverside location allowed for a mix of cruises and drives that provided a close and varied view of the game as it went about its daily life. The highpoint of my stay was a perfect morning on the river, when we came across a bachelor herd of elephants, one of them sound asleep (yes, elephants can sleep laying down), then spent a memorable hour watching their antics as they horsed around in the middle of the river like teenagers at the beach. 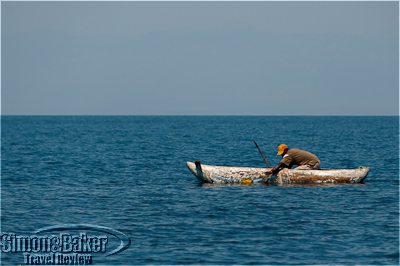 A local fisherman casting his net from a dugout canoe

Some 580 kilometer (360 mile) long, Lake Malawi is the main topographic icon of the country. It is internationally renowned among water sports enthusiasts and naturalists for its pristine shores and deserted islands nestled between towering boulders rising straight from crystal clear waters alive with small brightly colored fish. The beauty of the scenery and the hundreds of endemic species of cichlids fish drove the Malawi government to set aside the southern end the lake as Lake Malawi National Park in 1980. It was the first fresh water marine reserve in the world, and then in 1984 it became a UNESCO World Heritage Site. 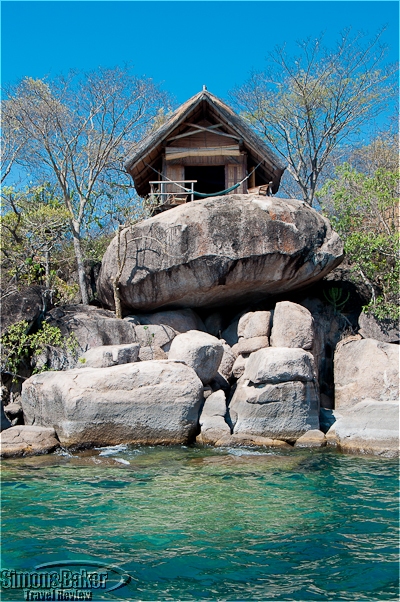 An hour’s motorboat ride off shore from Cape Maclear, Mumbo Island was a pristine one square kilometer (250 acres) dot of granitic rock topped by lush miombo woodland and blessed with a crescent beach of golden sand. Until the National Parks authorities first awarded Kayak Africa the exclusive rights to operate tourism accommodations on the island in 1996, it had never been populated. To preserve its unspoiled beauty, Kayak Africa created Mumbo Island Camp, a minimalist property run on uncompromising sustainable principles. It consisted of rustic bungalows of reed and thatch with comfortable beds, bucket showers and “eco-loos,” perched high in the rocks to better admire the dazzling waters of the lake, a dining area that served wholesome, simple foods, and in a corner of the beach, a water sports gazebo. There was no electricity, just solar and paraffin lamps and wind up flashlights. What did I like best? The dawn wake up call of a red billed hornbill enthusiastically welcoming the sunrise, and snorkeling in warm waters so clear I could see the outlines of underwater boulders deep beneath me, bright cichlids darting about them, and kayak rides to watch the sun dip into the lake, and… well, everything. The ultimate luxury of Mumbo Island Camp was its very existence. 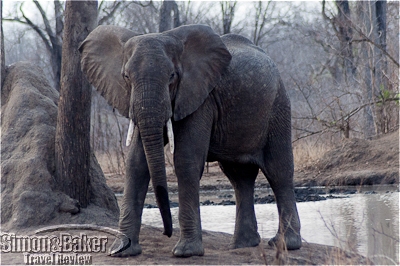 Elephants were a common sight at Mkulumadzi

Mkulumadzi, the sole property in Majete Game Reserve, the recently reborn only Big Five game park in Malawi on the Lower Shire River; and Pumulani, on the western side of the Nankumba Peninsula at the edge of the Lake Malawi National Park, were sister properties designed for Robin Pope Safaris by G. Hooft Graafland, a Dutch architect. These innovative world class luxury lodges sat gently upon the land, each guest accommodation custom designed to fit into the topographic elements of its environment, and covered with a roof of endemic vegetation to help offset its own carbon footprint and regulate inside temperatures.

Samuel Chihana pours a sundowner drinks for us

While the properties had their distinct character best adapted to their purpose, both were decorated in an elegantly understated contemporary style that offered optimum comfort without ever distracting from their breathtaking surroundings. Each had its own trademark feature. At Mkulumadzi, the wilderness lodge, it was the impressively engineered 88 meter (290 foot) suspension foot bridge that led across the river to the property’s entrance. It never failed to deliver new game viewing opportunities and make me feel like an explorer of a bygone era. 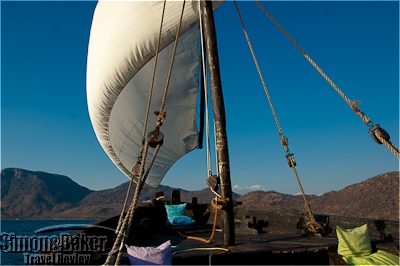 At Pumulani, the lakeside beach lodge, the unique feature was the authentic, hand built wooden dhow with a triangular sail, reminiscent of the days when Arab traders plied the waters of the lake, always ready to take me on a breakfast or sunset cruise. And best of all, along with exceptional memories I took away the satisfaction to have experienced two properties in harmony with my responsible tourism ethos.

But that was no surprise. On one of my early visits to Zambia many years ago, I had the good fortune to meet Robin and Jo, the founders of Robin Pope Safaris. It was a conversation that went a long way to opening my mind to the power of responsible tourism as a tool for sustainable development in Africa and beyond. 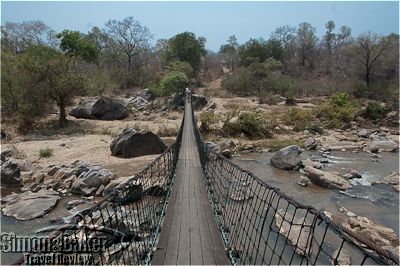 These two premier properties, relatively recently opened in a country still in the early stages of development were an ideal opportunity to experience first hand the contribution that the presence of my fellow tourists and I were making to the protection of previously at risk wilderness areas, while helping to alleviate poverty through good local employment practices, and the involvement of the local communities. I was delighted to hear that Pumulani was recognized as Malawi’s leading hotel at the 2011 and 2012 World Travel Awards.