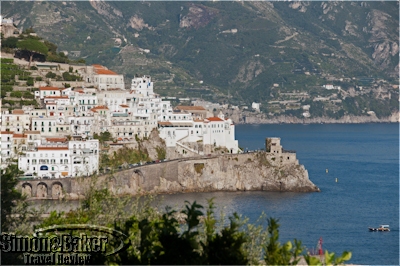 Our terrace had a stunning view of the Amalfi coastline

After decades of saying “some day,” I was finally wending my way along Amalfi Drive. Now officially known as Strada Statale 163, this rapid succession of hairpin turns originally carved by the Romans from the side of towering cliffs rising out of the Tyrrhanian Sea is widely recognized as one of the most spectacular coastal roads in Europe. Each turn revealed more eye-popping scenery. Isolated farmhouses and medieval watchtowers clung to the vertical rock face above, while whitewashed villages tumbled straight down to the sea below. Then on a rare stretch of straight road on the outskirts of Amalfi, an elegant three-story white stone facade appeared at the edge of the cliff. I had arrived at Italy’s version of Eden: the legendary Santa Caterina Hotel. 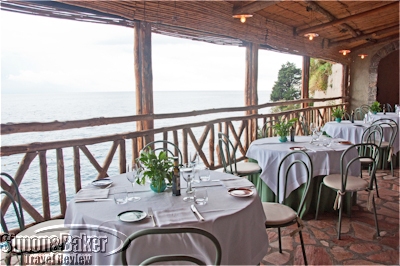 Built into a 60 meters (200 feet) vertical cliff, the century-old property was a sumptuous multi-level complex of terraced citrus groves and lush gardens that started on Almalfi Drive to end with a saltwater swimming pool and private beach at the water’s edge. The hotel had the timeless grace of a classic Mediterranean villa, with light-filled open spaces, vaulted ceilings and arched floor-to-ceiling glass doors opening onto terraces that extended toward the sea. In the common areas as well as in my own suite, pale Majolica tile floors sprinkled with hand-painted flowers, and white walls and ceilings provided an understated background to better showcase the antique furniture and artworks interspersed throughout. But beyond its breathtaking surroundings and exquisite decor, the distinctive charm of the Santa Caterina came from its people, management and staff alike, for whom the property has always been a family affair. Giuseppe Gambardella originally built the villa in 1880, only to see it destroyed by a rock slide a decade later. 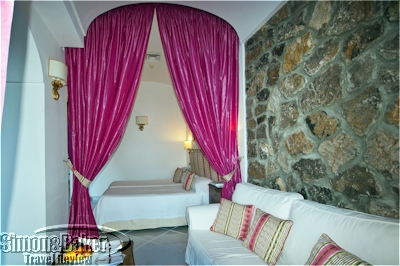 A soaring ceiling enhanced the airy feel of the suite

In 1904, his son Crescenzo personally rebuilt it in a safer location farther up the coast. He included six guest rooms, and the Santa Caterina was born. Fast forward through the 20th century, during which the Gambardella family continuously expanded and enhanced the property to make it the glamorous luxury resort with 66 guest rooms and suites that we enjoy today. Along the way, Crescenzo’s daughters, Giuseppina (Giusi) and Carmella (Ninni) assumed the direction. Now their own children, and more recently grandchildren, hold various positions to carry on the family tradition.

So it is with the staff as well. Many have been at the Santa Caterina for decades, in some cases for two or more generations, an extended part of the Gambardella family, upholding the tradition of flawless service for which the hotel is famous. There is no improvising this unique type of gracious hospitality. It makes me think of the doorman who not only stood with umbrella at the ready, but also profusely apologized for the rain, as though he considered it a personal shortcoming that he had failed to deliver perfect weather every day of my visit. 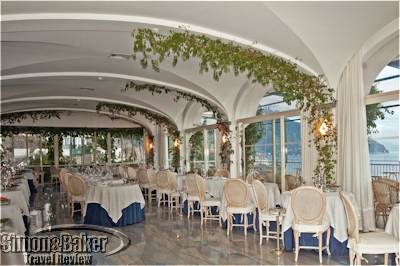 The Santa Caterina Restaurant was equally brilliant. Not only did its scenic dining room offer a fabulous view of the old city of Amalfi and the Gulf of Salerno, but it was also one of the best restaurants in town. Whether for lunch or dinner, Chef Domenico Cuomo and his team showcased the excellent traditional cuisine of the area, prepared to order from seasonal ingredients and the latest catch of local fishermen, as well as irresistible home made pasta dishes. There again the service was impeccable: attentive, friendly and precisely paced to ensure a superb dining experience, and a wonderful antidote to the standard tourist fare dished out in abundance all along the coast.

It was a restaurant well worth return visits, even if I didn’t have the good fortune to be a guest at the Santa Caterina; which of course would be most unlikely. Now that I have experienced the unique hospitality of the Gambardella family and staff, I couldn’t imagine staying anywhere else on the Amalfi coast. Rather, I yearn to return to the welcoming embrace of the Santa Caterina as the first opportunity; and yes, it’s nice that the idyllic vistas of the Amalfi coast just happen to be included.