A visit to Riquewihr in heart of Alsace wine road 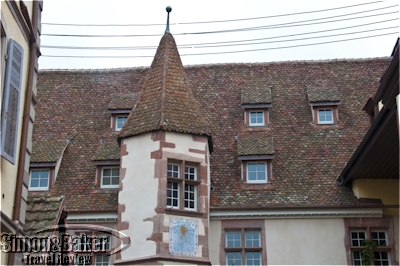 In France, La Route des Vins (The Wine Road) wends its way north to south from Marlenheim (near Strasbourg) to Thann (near Mulhouse) through 170 kilometers (106 miles) of the rolling hills of the Alsatian vineyard. Along the way it reaches over half of the 119 wine-producing villages, with the remainder only a short drive away. 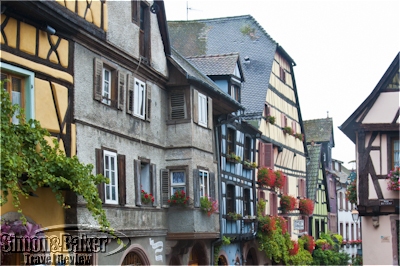 While Alsace traces its viticulture history back to Roman times and many of the villages along La Route des Vins can charm visitors with picturesque architecture reaching back to the Middle Ages, the itinerary itself is a contemporary concept. Intent on rejuvenating Alsatian tourism and refocusing attention on its once famed wine industry, both devastated by the Second World War, the regional tourism office organized an automobile rally on May 30, 1953. All participants departed at the same time, half from Marlenheim and the other half from Thann. Along the way they enjoyed a number of wine tastings and tourist site visits before reaching each other. History doesn’t seem to have recorded which team managed to travel the farthest, but the event proved to be a major success. Thus, La Route des Vins was born. Today, over two million visitors per year come from all corners of Europe and beyond to enjoy the warm welcome of the wine-growing community. Many return time and again to sample the superb wines and gastronomy of the region (paté de foie gras and choucroute garnie originated here). 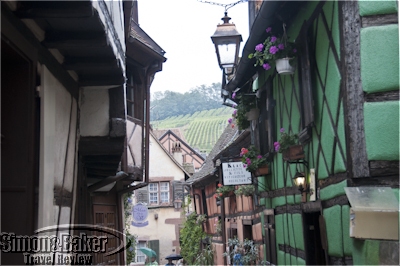 Every break in the roofline offers a glimpse of the vineyards

I was recently one of these return visitors, when I was able to couple a trip to Colmar, the lovely self-appointed capital of the wine road, with a long overdue stop in the nearby village of Riquewihr. It was les vendanges (wine harvest time), and I looked forward to taking a walk up the hill beyond the city walls to the venerable Schoenenbourg Vineyards, reputed since the Middle Ages for producing some of the finest Riesling in the world, and where grapes are still picked by hand. I also planned a leisurely stroll through the historic village with its narrow cobblestone streets lined with centuries-old half-timbered houses. But most of all, I wanted to return to the Hugel & Fils winery (3, rue de la première armée, 68340 Riquewihr, France, +33 (0)3 89 47 92 15, fax +33 (0)3 89 49 00 10, http://www.hugel.com, info@hugel.com), and pay a quiet homage to the memory of a man who almost four decades ago kindled my interest for good wines. Jean Hugel had hosted my first wine tasting in the very cellar where I was now headed. Along with the basics of wine appreciation, he taught me a golden rule by which I still measure wines today. 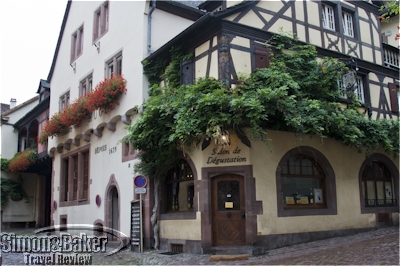 The Hugel Winery headquarters and cellars below

“A good wine,” Jean Hugel told me, “is one that you enjoy when you drink it, still appreciate when you pay for it, and can remember fondly when you wake up the next morning.” He was at the time at the head of Hugel & Fils, one of the most prestigious labels in Alsace, and a family that traces its wine making tradition back 12 generations, to 1639. I was saddened in the summer of 2009 to read his obituary in The New York Times, where he was memorialized as “a leading force in resurrecting the Alsatian wine trade.” I could only nod, and remember his passion as he introduced me to the peerless Hugel Rieslings and Gewurztraminers and most exquisite of all, the nectar-like Vendange Tardive (late harvest) wines. These prestigious wines are made in tiny quantities from overripe grapes picked well after the classic vintage, and in the best years only. These grapes have been affected by botrytis cinerea (a fungus commonly known as pourriture noble, or noble rot). Jean Hugel is credited with writing the rules for the production of Vendange Tardive, which became law in 1984. To this day, no matter where in the world I happen to be, I can never see one of the green fluted bottles with their iconic yellow Hugel label without remembering my host on that long ago afternoon. 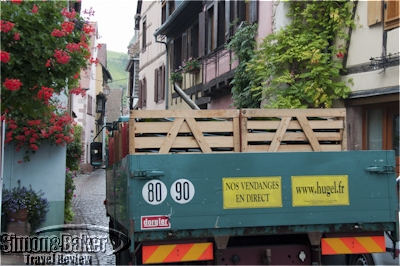 On the day of my visit, his nephew Etienne Hugel welcomed me to Riquewihr with the same warmth and enthusiasm. Alas, the weather was not so friendly. A cold drizzle had been falling since morning; not a propitious day for a walk to the Schoenenbourg. We headed for the cellars instead, under the meticulously preserved 16th century building of the Hugel headquarters. Along the way, we stopped by the dock where trucks were pulling in with their precious cargo of plump white grapes in plastic tubs. These were immediately brought to the press house, quality tested and selected before being tipped through a funnel designed to gravity-feed them into one of the pneumatic presses on the floor below. The free-run and first pressing juices are then directed, again by gravity only, into stainless-steel vats where they settle overnight to remove solids before the fermentation process begins (Hugel uses only these for its own label. The last pressing is always set aside and sold in bulk). The juice is then gravity-fed into giant oak casks, some over 100 years old, or into stainless steel vats for fermentation. 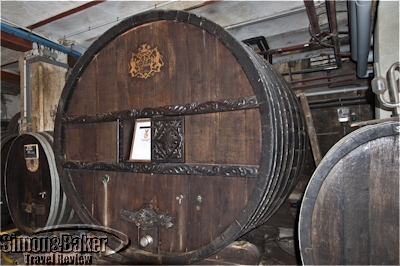 We continued on, farther into the cellar that reaches deep and wide under the old town. Wines mature there in rows upon impressive rows of huge casks, including the famous Sainte Catherine dating back to 1715, and still in use, before ending our tour in the tasting room. Etienne takes us on a seven-wine graduated tasting with the same verve as his uncle did so many years ago. By the time we get to the Gewurztraminer Jubilee 2008 and the divine Gewurztraminer Vendange Tardive 2005, both from the oldest plots of the Hugel estate in the heart of the Sporen grand cru area, I am ready to break all the rules of wine tasting: I sip, and I swallow. I am certain that Jean Hugel would approve