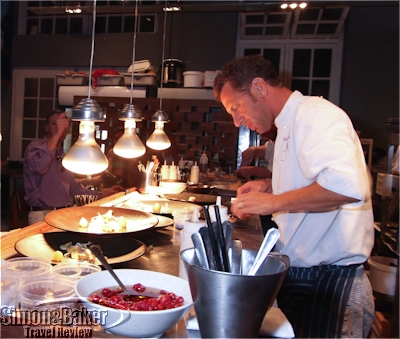 On a visit to Cape Town, South Africa earlier this year we had dinner at two gourmet restaurants that although distinct from each other in many ways shared a common passion for fine dinning. One provided an urban chic experience and the other offered classic fine dining in a romantic setting. 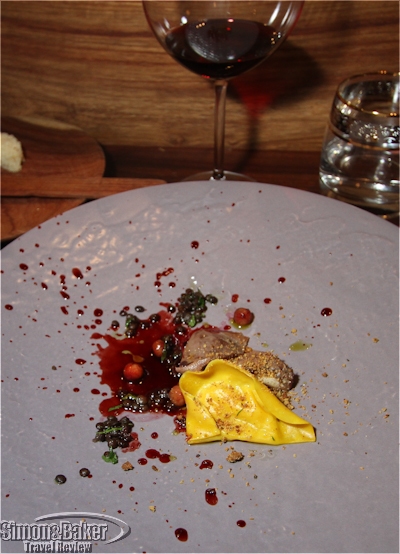 “Shot Pigeon” at The Test Kitchen

For a hip urban dining experience we enjoyed the extended tasting menu at The Test Kitchen. Chef Luke Dale-Roberts was in his element blending common and exotic flavors. There was a long wait list for dinner reservations at the sold out restaurant with modern décor within the Old Biscuit Mill, a renovated mall in an industrial corner of the city. Although there was little activity in the shopping center at night inside the restaurant it was loud and fast paced. It was an entertaining evening. From our Chef’s Table seats we had an opportunity to watch the chef and his staff up close at work in the open kitchen. 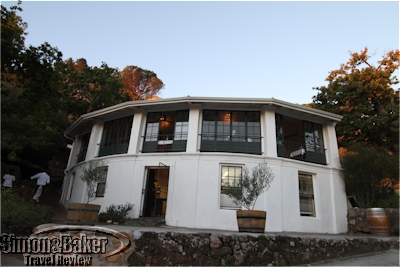 The Roundhouse Restaurant has a water facing view

The Roundhouse, a short drive from the center of the city, was the perfect setting for a romantic dinner. Many restaurants with a view such as theirs dedicate little effort to the meal and service. The opposite was true at the purportedly haunted property. A team of friendly and efficient staff in the dining room complimented the efforts of the kitchen staff, delivering a perfectly prepared and artfully served meal with wine pairings to match the sunset views of Camps Bay. Dinner that night combined gourmet dining and a stunning natural setting in one place. 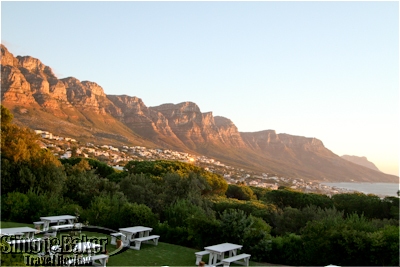 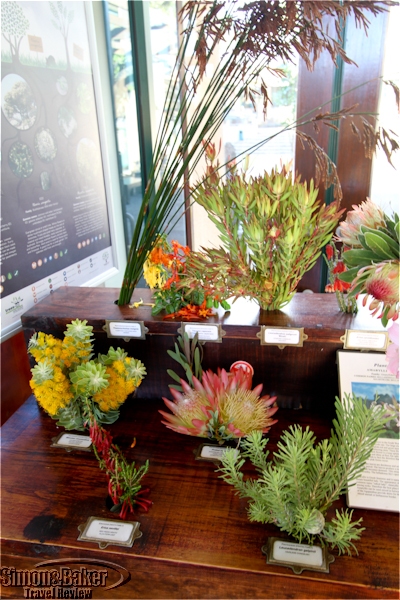 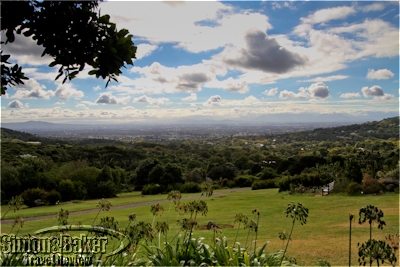 A clear view of the cape flats

Although they were caught by a downpour before they could complete their explorations they had much positive feedback. Click here to read about their visit to the 538-hectare estate with a 36-hectare garden that will celebrate its centenary anniversary next year.

A diamond attraction The Big Hole in Kimberley, South Africa 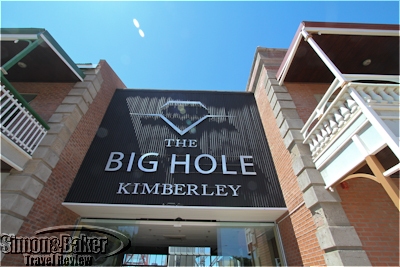 The entrance to The Big Hole exhibit

Miles and miles from the country’s urban centers and famous attractions it seemed, at first glance, that Kimberley, the capital of the Northern Cape, one of the provinces of South Africa, had little to offer tourists. Since the big mine closed even local youth were departing as soon as they could never to return, we heard from a local distressed by the population flight. A closer look revealed that since 1888 Kimberley has been home to De Beers Consolidated Mines (DBCM), South Africa’s largest rough diamond producer, and the Big Hole, a world renowned diamond mine.

Although the mine was no longer active when we visited the area, according to locals and the De Beers websites the company owns the land and helps manage The Big Hole tourist attraction designed to replace some of the revenue lost following the closure of the Kimberley mine. As diamond and history aficionados riding the Rovos Rail train between Pretoria and Cape Town we found a visit to town to see new facilities of The Big Hole appealing. During our three hour stop in Kimberley the train company organized a guided visit for interested passengers to The Big Hole attraction, a museum and display center of the days of glory of Kimberley, offering us an opportunity to see the exterior of the famous Big Hole and learn about its origins and history. 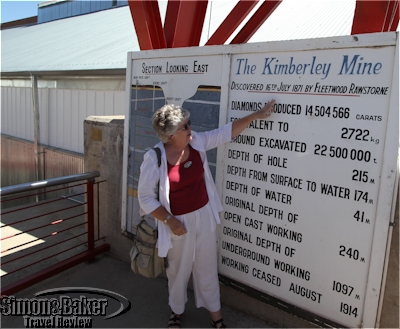 Veronica Bruce told us about the history of the mine

Our excursion began at 9:45 a.m. and ended at 12:30 p.m. on a Saturday in the summer. Veronica Bruce, our knowledgeable and courteous local tour guide, met us at the train station platform. She invited us to pick up a bottle of water from a cooler before boarding a large bus. During the short drive from the station to The Big Hole she described a little of the history of the area and the attraction we were about to visit.

There were several activities on offer at The Big Hole including Underground Mine Experience, Real Diamond Display in a vault (such as the 616, the largest uncut octahedron diamond in the world, and The Eureka), Viewing Platform, Pulsator Building, Diamond & Destiny Film, and Old Mining Town with restored period buildings. The guided tour allowed us to see several of them and maximize our limited time there. The Big Hole is full of water

To enter we had to pass a hand held metal detector inspection. Once inside the new looking cavernous building with a towering ceiling our tour guide led us to a mini theater where we watched a brief video dramatization reenacting the history of the city with the aid of fictional characters (a travel journalist and a tribesman). We learned that in 1866, Erasmus Jacobs, a 15-year-old playing on the banks of the Orange River, near Hopetown and about 30 miles from present day Kimberley, found the first diamond in the country, a 21.25 carat diamond in the rough his mother gave away thinking it was a worthless rock. It was later named The Eureka.

Following the film we walked onto a cantilevered walkway, 30 Cape feet wide and 30 Cape feet long and the size of a 19 century mining claim, to see the Kimberley Big Hole from above. From our height, well above and to the side of the hole, we saw blue green water filling a very large opening in the African soil; over time rain water had replaced the dirt removed during decades of mining. It was a blistering hot morning, especially atop the unshaded walkway under the punishing rays of the mid morning sun. Although we didn’t want to linger we were mesmerized by the sight of the water filled hole. 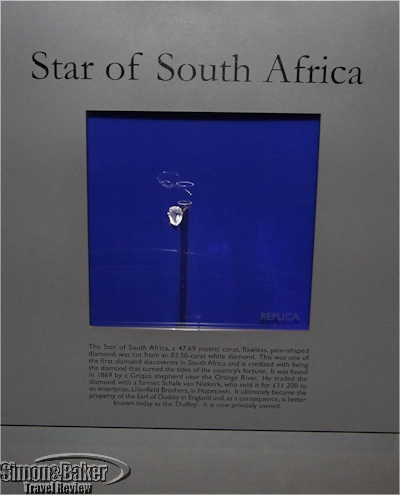 A replica of the Star of South Africa

After listening to her descriptions of the history of the Hole (unofficially diamonds were first found in what would eventually become the Hole by a cook, she explained) we walked down one floor into the old mine now converted into a tourist display with sound effects and lights to showcase for visitors what conditions were like in the old tunnels. There was an elevator with capacity for less than half of our group so most of us took the stairs. Inside the corridor of the former mine she showed us old mining tools and explained the dynamite and mining process used when the mine was first established. 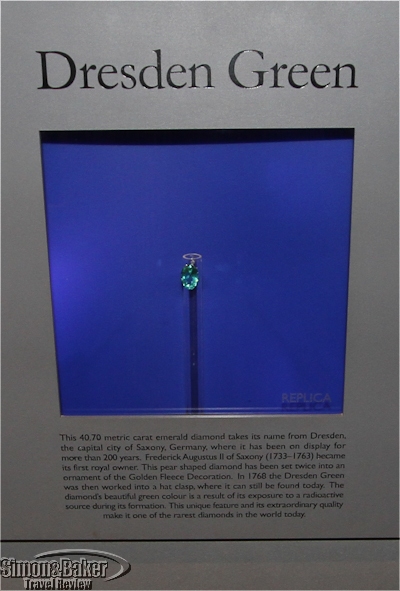 A replica of the Dresden Green

On resurfacing from the underground section we walked to the diamond exhibit in a vault that featured examples of stones and their regions of origin and resin replicas of some of the famed diamonds (a couple of the authentic stones were on loan). Next we saw some of the exhibits that illustrated the diamond mine city’s history. Our guide had allotted 30 minutes of free time for those travelers from our group wishing to visit the attraction curios and diamond and jewelry shops within the complex before the bus departed back to the train station and our onward journey toward the Western Cape. 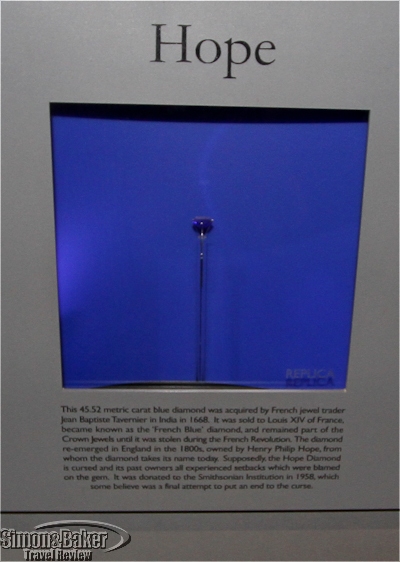 A replica of the Hope Diamond

Serious shoppers would have to rush because there were only two or three small diamond and jewelry and other curio shops and 34 passengers on the train in addition to regular visitors to The Big Hole. The diamond and jewelry shops sold ready made jewelry and loose diamonds. Surprisingly, top quality diamonds were only available in one carat and larger sizes, a sales lady explained in the shop we visited briefly.

Once again there were cold beverages on offer before we boarded the bus for the short drive back to our train. When we arrived at the station Rovos Rail staff awaited us with refresher face cloths and sparkling wine. Soon we were back aboard the train preparing for lunch and reminiscing about the history, the mine and the famous diamonds sourced in Kimberley. 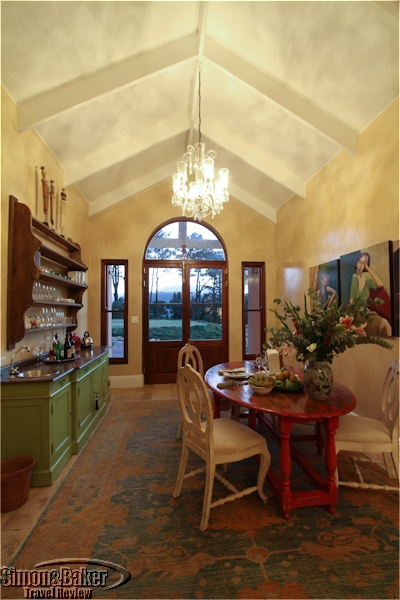 Entry to Villa 1 at La Residence

During a summer trip to South Africa Elena and Gary revisited La Residence Hotel and Villas in the tiny gourmet and wine producing town of Franschhoek about one hour’s drive from Cape Town. They were delighted with the discovery of a new section of the property that welcomed families (the hotel section was reserved for adults and children 12 and older). The Villas added a level of luxury and privacy to the boutique hotel. 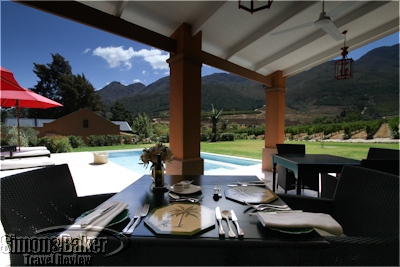 Breakfast looking out on the pool and vineyards