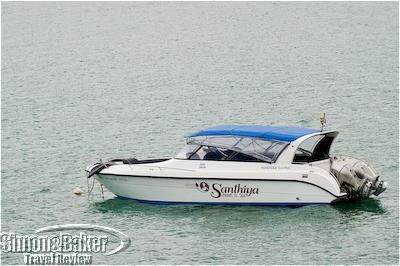 Koh Phangan, (or simply Phangan in local parlance) is a remote island in the southeastern part of the Gulf of Thailand, 9.5 miles (15 kilometers) north of Koh Samui, its larger and more established sister. Phangan has been popular for several decades among world-trekking backpackers who have been known to congregate monthly by the tens of thousand at the southern tip of the island on Haad Rin beach for the Full Moon Party. For me, however, the island’s magic unfolded farther north, in the secluded northeastern part of the island, where the crescent-shaped bay of Thong Nai Pan is home to the stunning Santhiya Resort and Spa. 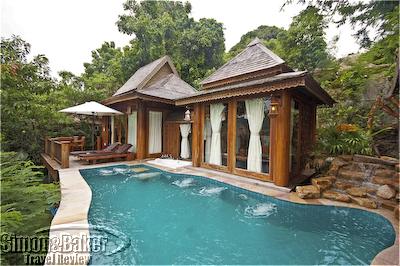 It was a 40 minute ride from Koh Samui on Santhiya’s private speedboat. The latter half of the journey was along Phangan’s pristine coastline of steep hills covered with dense forests rising from the rocky shore. Off and on, strips of creamy sand appeared between the rocks, dotted with a few thatched huts shaded by coconut palm trees. Soon we were approaching a discrete wooden pier at the far edge of Thong Nai Pan, considered one of the loveliest of the island’s beaches. Santhiya rose from the shore, a hillside of exuberant tropical gardens punctuated with peaked roofs characteristic of traditional Thai architecture. Above its gently curving private beach, a tall waterfall splashed into a vast multi-level infinity pool, further enhancing the serenity of the landscape. 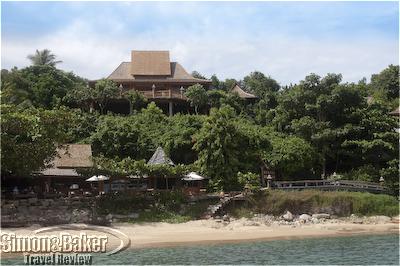 King Rama V, who reigned over Thailand for over 40 years in the late 19th and early 20th centuries and is one of the Kingdom’s most revered rulers, is known to have been especially fond of the island, which he visited repeatedly. From the moment the boat prepared to dock to the deep rippling sound of a gong announcing our arrival, I felt I was stepping back into the romance of that bygone era. The property was inspired by the architectural style associated with the monarch, of airy teakwood pavilions under soaring peaked roofs held by tall polished wood pillars, their clean lines enhanced by a profusion of elaborate, lace-like woodcarvings. They also featured inviting terraces with commanding views of the bay; as did my ocean view villa with its private whirlpool plunge pool nestled within the verdant hillside vegetation. 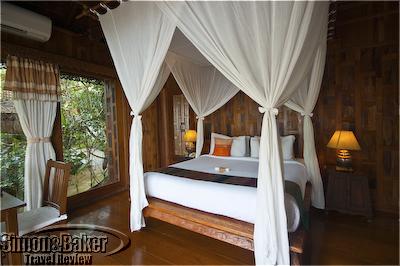 My bed was swathed in white netting

But at Santhiya, timeless elegance and grace were not limited to the surroundings. Every member of the remarkably attentive staff seemed intent on being an ambassador of the vaunted Thai hospitality. And the resort offered a number of opportunities for guests to appreciate traditional lifestyle arts. Thai evenings at Chantara, the property’s main restaurant, were a chance to sample an extensive array of lesser known Thai culinary specialties, and also to listen to and watch regional music and dances performed by Santhiya’s own dance group. I also especially enjoyed the intimate Ayurvana Spa for one of the best combinations of traditional Thai and international treatments I have enjoyed anywhere. 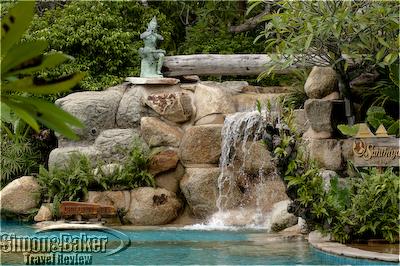 And as luck would have it, I happened to be at Santhiya on the full moon. The shimmering waters of the Gulf of Siam (as the Gulf of Thailand was once known) were indeed lovely under the pale golden moon, as was the music drifting from the village across the bay; all the more so that I could enjoy it all from the luxurious privacy of my personal terrace. Visit the Simon & Baker Travel Review to read more about Thailand and my stay at the romantic Santhiya Resort and Spa. 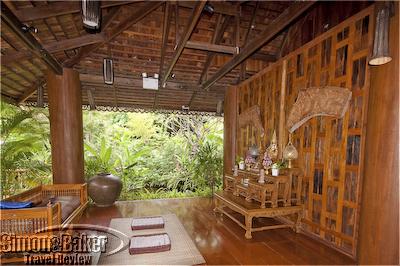