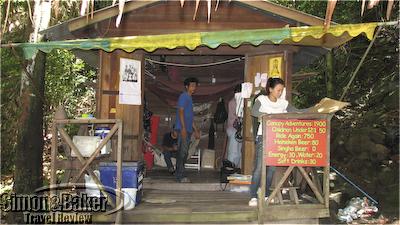 On a recent visit to the island of Koh Samui in Thailand I went on a canopy ride. The mid morning ride provided an off the beaten track activity and a pretty bird’s eye view of the local greenery including a waterfall. At my request after seeing the activity listed among the hotel tour offerings, the hotel staff at the Hansar Samui, my beachfront hotel on the northern coast of the island, coordinated the outing. The hotel sorted out reservations and provided transportation to the canopy ride site. 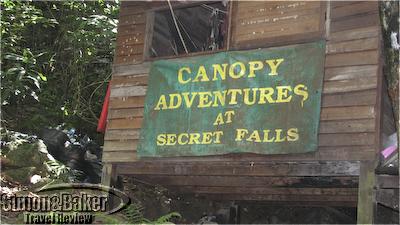 From the paved road a few minute’s drive from the hotel we followed a bumpy dirt road that made me glad we were in a four by four vehicle. When the road ended we found a steep uphill path. At the top of the path there was a small thatched roof hut where three staff welcomed us. Since only two of us were scheduled at that hour we were able to begin quickly. We signed in, promised not to sue them in case of an accident and proceeded with the tour. Minutes later we donned canopy gear and thick gloves (mine smelled awful) and continued up a hilly path to a training spot in the company of two of the friendly staff members. 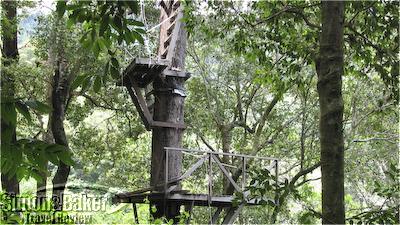 Ladders to the canopy

A sea of mosquitoes greeted us while we listened to their explanations in thickly accented English.  Additional climbing led us to the first of several treetop platforms. Although it was harder than it looked when the guides showed us and required upper body strength to slow down and stop while moving down the line, it looked very safe. Soon we were zipping along the trees and screaming delightedly. The heat and humidity were high even though the sky was mostly overcast. Sweat dripped from our faces and my sunglasses fogged up so much they became useless so I let them hang around my neck. 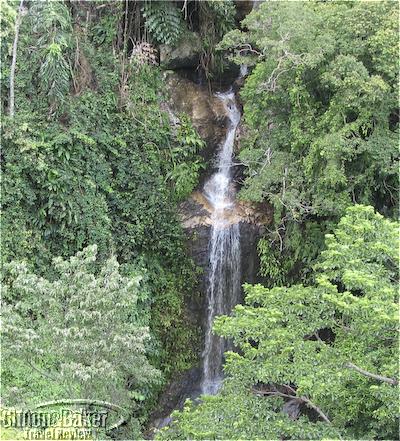 When we arrived at the last zip line we felt small rain drops. We rushed back to the starting point just in time to miss the pouring rain. While the next group of tourists waited for the rain to stop we wolfed down a plateful of sweet watermelon they offered us and pondered how the ride had gone by so quickly. A short while later the rain slowed down. We took advantage of the lull to say good bye and made our way back down the steep path to the car.

After cleaning our hands with refresher towels in the vehicle we headed back to the hotel in air conditioned comfort, drinking bottled water to quench our thirst while planning our next adventure. Canopy Adventure (Thailand) Co Ltd, PO Box 28, Meanam, Koh Samui, Suratthani, Thailand 84330, Phone + 66 077 414 151, www.canopyadventuresthailand.com, info@canopyadventurethailand.com