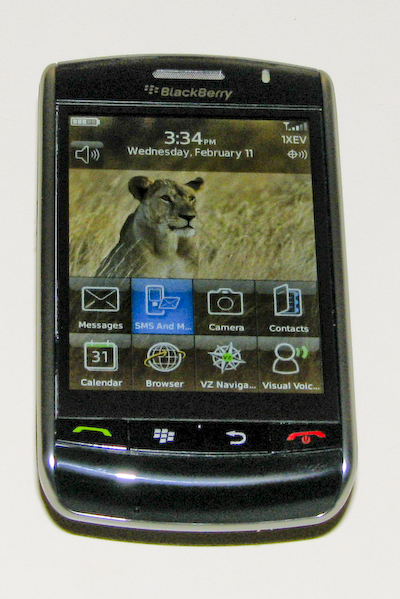 In today’s rapidly evolving marketplace of smart phones, the Blackberry Storm from Verizon raises the bar with several unique features. Its compact form fits comfortably in the hand or pocket with minimal external controls to mar its sleek solid feel and sleek design. With the screen lock enabled, the phone fit comfortably into a pocket with the need for a protective case.

The unit we tried had an 8GB mini-SD installed and came with an international plug package that was useful in Europe; no additional adapter was required to charge the phone in Germany. We tested the phone for several weeks in Colombia, South Africa, Botswana, the U.S. and in Europe (Germany and France). It worked perfectly as a cell phone and Internet access functioned everywhere we tried it. It seemed that the high speed 3G network was available most of the time.

From the first touch, it is clear that this is not an ordinary phone. The bright screen is eye catching with a solid glass surface that actually clicks when pressed. Combined with onscreen displays it creates a totally unique feedback system for the user. The tactile response allows much faster use of the touch screen because the fingers know how many times a particular item was pressed. With many other touch screens, the visual queues take a second to be processed.

Another great feature is the rotation of the display as the phone turns, which is enabled in every application. Some competing systems provide a similar response when the phone is turned, but most do not have it as deeply ingrained into every application as the Storm. For those users with large fingers, the sideways full screen keyboard was a real blessing. 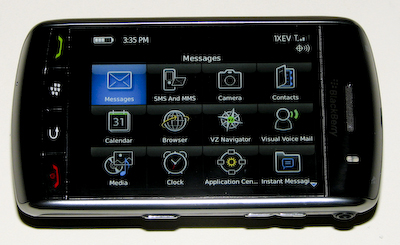 Web access was smooth and natural with excellent reproduction of most web pages on the tiny screen. A few quick finger motions allow for rapid navigation and scaling in an intuitive manner, and made browsing practical in spite of the lack of a keyboard. It was great having a fully functional browser always along to quickly look up an address or phone number.

Email setup was made easier by predefined wizards for common mail services, but even regular POP configuration was quickly accomplished. The built-in camera allowed us to send instant postcards to friends and family using email attachments. With a 3.2 Megapixel photo size, a built in image stabilizer and video capability, the Storm offers multiple options to capture the moment.

The application suite that came with the phone allowed download of movies and audio files for playback on the Storm. The video format produced a nice picture quality with practical volume on the speakers, although the application took quite a bit of time to convert to the format used on the phone. The software was Windows based and the install was straightforward.

Once installed and connected to the phone, audio, video and images could be loaded into the chip memory installed in the phone or extracted to backup the smartphone to the computer. We like the idea that the micro-SD memory capacity can grow with technology, a serious advantage over competitors with hard wired RAM for storage.

A favorite feature was the data modem which allowed the laptop to access the Internet through the smartphone high speed network access. Fair use rules apply and allow a liberal amount of network access when traveling.  We had less success in Europe, it was trying to connect to the German parent company for Verizon, but just never quite got it working.

In summary, the Verizon Storm has a number of features that make it a serious contender for the Apple iPhone. With swappable memory cards and batteries, smaller size, improved photo and video capability, tactile feedback and fully integrated display rotation, the Blackberry Storm sets the bar higher and will attract business users interested in a highly functional international phone.