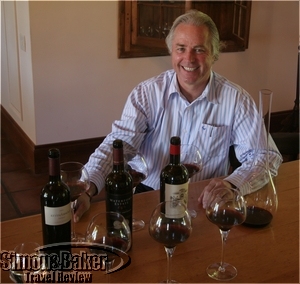 Kevin Arnold at The Jem tasting

For years South African wine makers have been making inroads into the world wine markets. Slowly their wines have gained favor among wine lovers around the globe. In the last 20 plus years the production volume and number of vintners has increased manifold. For example, in 1979 there were 24 wineries in Stellenbosch and now there are 187.

At the same time, quality wines have been making appearances in the domestic market and abroad with increasing frequency. This is due in part to South Africa’s high percentage of small producers who have to excel in their work to survive in a highly competitive world wine industry.

A prime example of this is Kevin Arnold of the Waterford Estate in Stellenbosch in the Cape Wineland area near Cape Town. After years of producing wines he realized that to make his mark in the world he needed something special. In 2001, he planted 11 varieties of grapes in the hope of finding the perfect blend. He waited patiently and eventually discovered that a combination of eight of the original 11 resulted in the type of wine he sought. The Jem, named for his business partner Jeremy Ord, was launched initially in South Africa and Sweden in November 2007. It will be available in London in January 2008 and in New York in February 2008.

During a recent visit to South Africa, we met the well known vintner and were among the first to taste The Jem 2004, the first wine released from the blend. It is new yet well set in a familiar European base. What makes it unique is precisely that combination of tradition and novelty. French Bordeaux and South African flavors join to form a rich and smooth wine with a memorable finish.

Arnold knew he was on the right path when the wine continued to reach spicy aromas and flavor. “That is the ultimate test. That is the hallmark of a great wine,” said Arnold. “I want to be known as South Africa’s premier red wine producer. I think you need to enjoy what you do and I certainly do; and seeing our wine served at top restaurants is a boost.”

The Jem is made with Cabernet Sauvignon (35%), Cabernet Franc (24.5%), Shiraz (15%), and (Mourvèdre 10.5%), as well as Petit Verdot, Malbec, Merlot and Barbera. The fermentation process took place over 19 months in a combination of 40 percent first fill French oak with the remainder second fill in French barrels. It is due to mature between 2010 and 2018.

In addition to taking a bold innovative step by creating a new blend Arnold is trailblazing by establishing a quality price point of R680 surpassing the $100 mark. Last we heard sales of The Jem were brisk at the winery for the limited production wine. We suspect that as the word spreads among Waterford enthusiasts and the wine is released in early 2008 in the United Kingdom and United States, two of the winery’s top three export markets, the remaining bottles will disappear before much longer.

Arnold who has been in the wine business for more than 30 years wants to make a statement to the world with his wine. He wants everyone to know South Africa occupies a distinctive and worthy place in the wine firmament. When he was testing the wine he was thrilled to discover it had staying power. He hopes The Jem will mark a significant milestone in his quest for distinction.

Arnold’s winery is certainly on the right path. The Waterford Estate produces a limited quantity of wines and specializes in reds. The winery only uses its own grapes and 20 percent of all sales take place at the award winning cellar door. We visited the estate recently and enjoyed Waterford’s chocolate wine tasting. Click here to read about the estate and chocolate wine tasting.