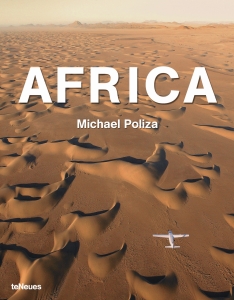 Self taught photographer Michael Poliza captures the heart and the mind with his amazing collection of colorful animal and panomaric views of the wilderness in Africa (teNeues), a coffee table book.  Four years of bush excursions in Southern and Eastern Africa are reflected in the 408-page book with nearly as many photos.

Weighing in at about 12 pounds it’s an oversize (11.5 by 14.5 inches, 29 x 37 cms) hefty tome with page after page of magnificent photos.  Each photo occupies a page, sometimes two (photos broken in half by the binding made us wish for an even larger canvas). Even so, the animals and scenery seem to burst beyond the borders of the book transporting the reader to the bush.

Anyone who has taken wildlife photos can guess at the months of time and effort such a book might have cost. Poliza worked with a Canon digital camera and refrained from altering the photos beyond the usual “dark room” processes. It is hard to imagine the patience, passion, dedication and sheer determination it took to capture the images.

Poliza started as a child actor on German TV, then founded several highly successful IT ventures in the U.S. and Germany. He now focuses mainly on filming and photography, including work for the Discovery Channel. He spends much time in Cape Town, South Africa.

Africa includes text in English, German, French, Spanish and Italian and summary descriptions of each shot with a thumbnail photo of the picture to identify the subject and location where it was taken. At € 98, $ 125, £ 70, Can $180, and SFR 158 it’s a steal for the lover of art, Africa, photography and nature. We look forward to his next project.