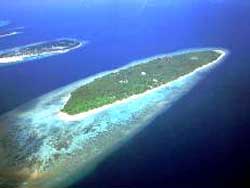 An attol in the Maldives

Male – Tourists are complaining to the Maldivian Tourism Ministry because Maldivian tourism has increased and resorts are overbooked. Tourism started to show signs of improvement during the last weeks of last year, following the huge drop in tourists after the December 26, 2004 tsunami.

Even though the average occupancy of August was 56.5 percent, some resorts stopped bringing in tourists because they were full. Some international tourist operators forewarned that with the beginning of this year the resort occupancy of resorts will increase and the problem of overbooked resorts might arise.

The Maldivian Tourism Ministry said in an announcement that since there is overbooking and tourists are complaining booking must be done according to the law. The Ministry said that 15,182 beds from 78 resorts are being used by tourists. While 12,788 beds were used during January of last year, the number of beds used during January of 2004 was 16,088.

The resorts overbooked at the moment are on Male atoll, on atolls close and far away from Male. Sun Island Resort with 426 rooms is the resort with the highest number of beds and has a current occupancy higher than 95 percent. Sun Island’s manager Abdurrasheed said that to prevent the problem of overbooking bookings have been controlled somewhat.

To learn more about the Maldives, go to Maldives and for information on the island resort we visited, go to Royal Island