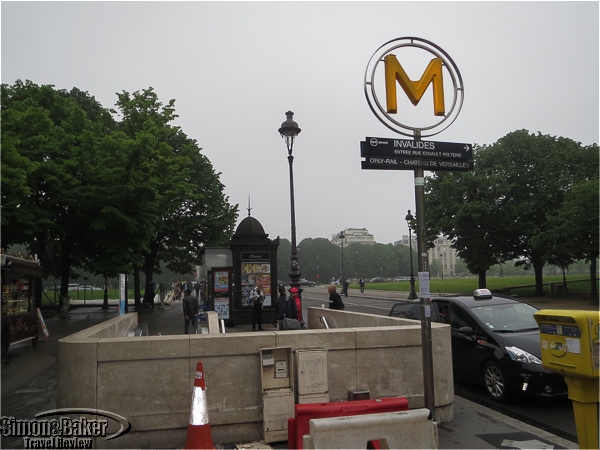 Over the years I have visited Versailles, the famous palace established by Louis XIV near Paris, France, several times on my own and with large group tours. While the attraction itself was impressive the crowds were oppressive and the logistics to visit it cumbersome. On my most recent stay in the City of Lights, I tried a new approach. I placed myself in the hands of an organized small group program that started and ended in Paris. When I visited Versailles in the past I had to make my own way there from Paris. This time all I had to do was reach the meeting point in central Paris in the morning, and make my own lunch arrangements. The tour company took care of the rest. At the conclusion of the tour our small group returned to Paris together. I was pleased with the results. I appreciated and enjoyed my visit to the 787 hectare palatial estate much more than on most of my previous visits, and was able to discover areas open only to small escorted groups such as ours. 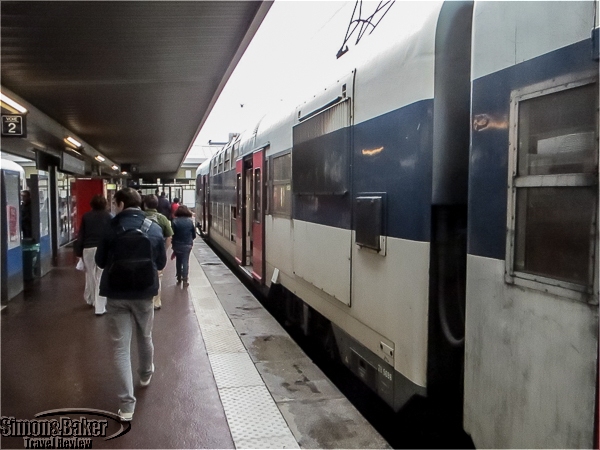 At the train station in Versaiilles

We met Herve Rudrauf, our English speaking French tour guide, by the entrance to Les Invalides RER train station in the tony seventh arrondissement near the heart of the city early morning on a spring Friday. It was pleasantly chilly. The sky was gray and overcast, threatening rain. We were thrilled to discover there were only four of us in the daylong (eight and a half hours) tour. The other two participants in the Full Day Versailles VIP Behind Locked Doors program, organized by City Wonders Tours (6-9 Trinity Street, Dublin, 1-800-358-1942, www.citywonders.com, Info@citywonders.com) were from the United States. 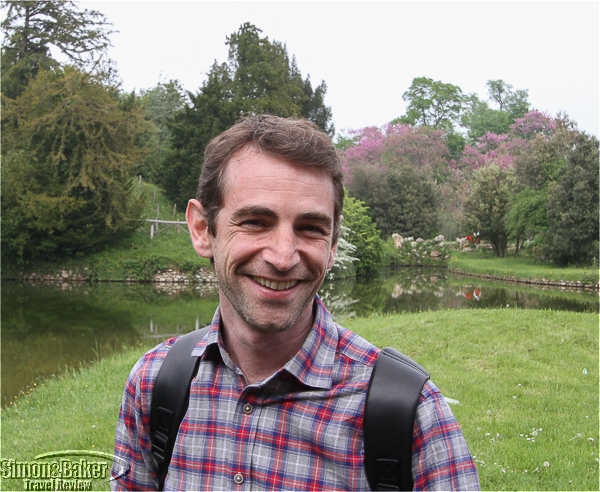 Herve Rudrauf, our tour guide, in the palace gardens

Following greetings, introductions, and instructions Herve handed each of us an RER train ticket and we descended the stairs to the station platform. A few minutes later, we boarded a crowded two level suburban train. It was necessary for our group to split up in order to find seats. Once at the Versailles train station, we found each other and walked together to the palace entrance where, thanks to our tour, we skipped the long admission line. We also had special access to select rooms, such as Marie Antoinette’s private theater, open only to escorted visitors. A staff person provided our group exclusive access. 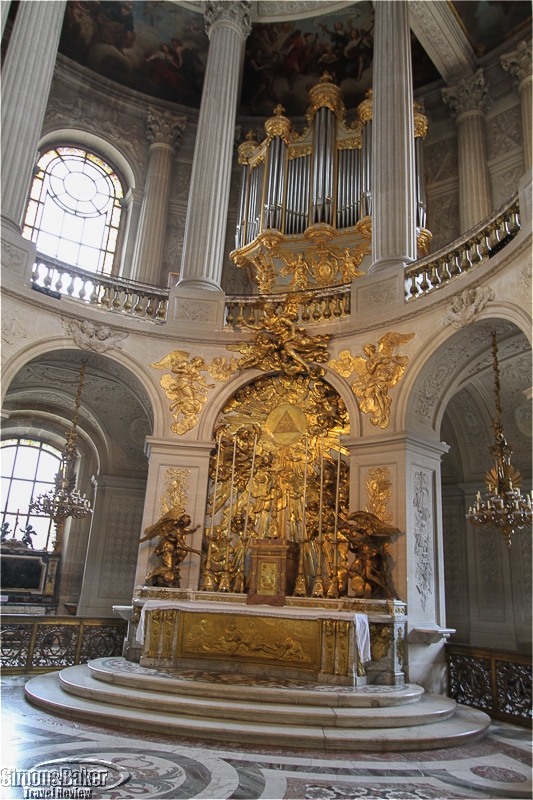 The Royal Chapel at Versailles

Despite the expedited entry and private visit, the interior of the palace was overcrowded with tourists, sometimes making it challenging for our small group to remain together, hear our guide, take photos and walk from one room to another without being separated. That was not surprising given that some 7.5 million people visit the opulent former royal residence each year, according to a Versailles spokesperson. Although the interior was 63,154 square meters large and the attraction employed as many as 1,000 staff, only 23,072 square meters of the former palace were open to the public, and some of those rooms and halls could only be visited with a guide. A representative from City Wonders indicated that as much as 70 percent of the palace interiors may be visited via an escorted tour. 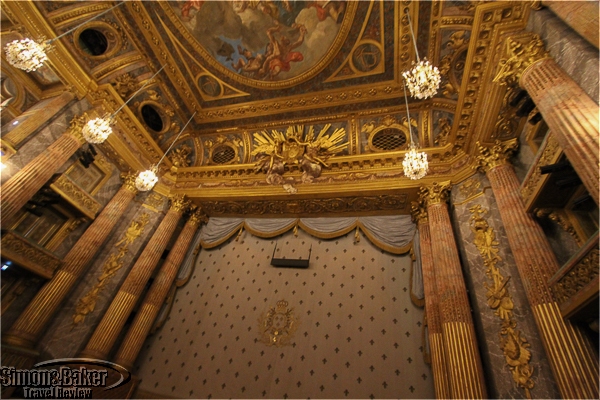 Our private visit of the Royal Opera was memorable.

Because of the uncertain and overcast weather it was a relatively quiet day, our guide explained to our surprise when we commented on the number of people all around us. As we made our way within the storied interior the cacophony of noises competed for our attention. Our eyes and imagination wondered. It was easy to become distracted. Thankfully Herve was efficient at keeping a speedy yet comfortable pace (although restroom breaks were limited and there was no time for the gift shop) while at the same time sharing engrossing information about the former royal residence and its famous occupants. 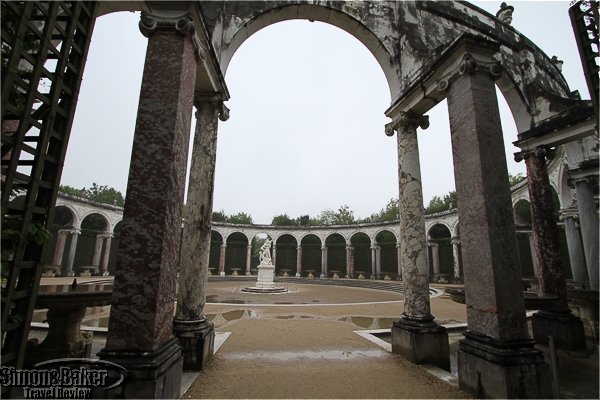 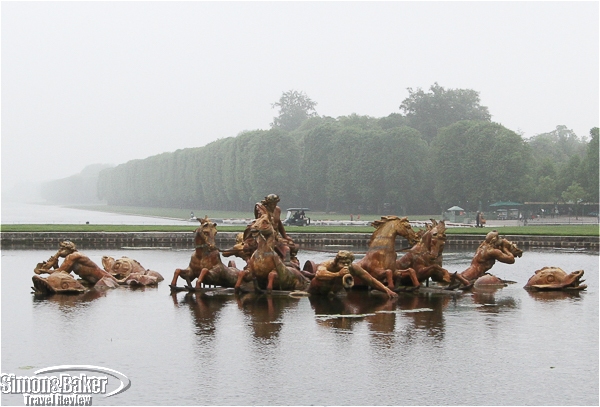 The palace gardens did not look their best because it was cloudy and rainy.

Anticipating a two hour break for lunch we had made reservations in advance at a gourmet restaurant in the village of Versailles. Unfortunately, by midday we were in the heart of the estate and too far away to return to the village for lunch so we begrudgingly cancelled our booking. Instead we made our way to one of the crowded restaurants within the property. While the service was speedy and efficient lunch was the most disappointing meal we had during that month long trip. We were so hungry after leaving the restaurant we attempted to buy something else at the nearby cafe only to find a slow moving long line and a limited selection of fast food items that appeared no better than what we had already sampled at the restaurant.

Part of what made the tour worthwhile, in addition to our tour guide’s knowledge and enthusiasm, was the access our small group had to areas of the former palace reserved for escorted tours such as ours. Despite huge crowds we had a chance to step behind the cordon at the Royal Chapel for a brief look. We had private visits of the Royal Opera in the main building and the Queen’s Theater in Le Petit Trianon, among of my favorite sections. 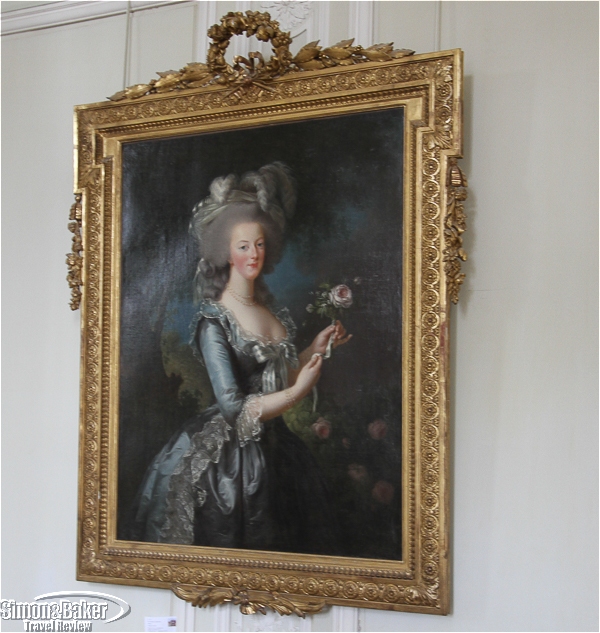 A painting of Marie Antoinette at Le Petit Trianon 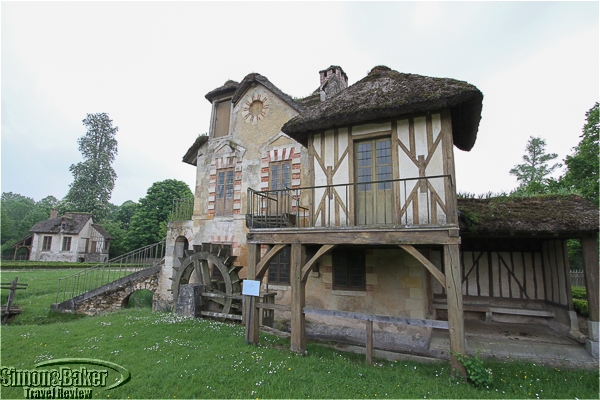 One of the houses in the Hamlet, part of the Versailles estate

After lunch we walked around the gardens, discovering a hidden grotto where the famous queen was said to spend quiet time alone. We also visited Le Petit Trianon, Marie Antoinette’s home away from home while at Versailles; and ambled around the Hamlet, a make believe village within the estate.

Perhaps because before studying to become a licensed tour guide Herve spent several years working as an actor his discussions about life at Versailles were engrossing and entertaining. His interest and passion about French history (he wrote his thesis on the representation of royal power in France), the royal families, and the intriguing stories of inhabitants of the former royal palace were contagious. By the end of the tour, our fellow travelers were asking him for recommendations of books about the history of Versailles and its previous inhabitants. 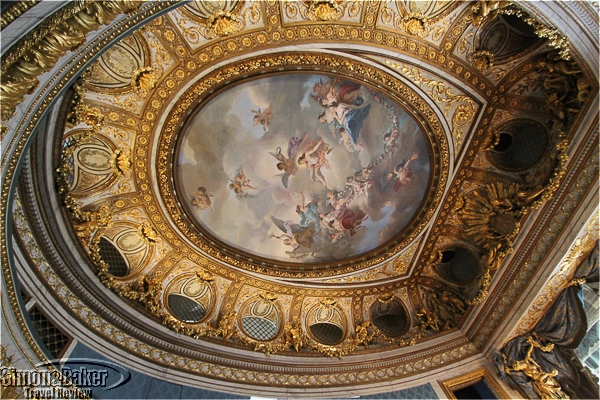 The ceiling of the Queen’s Theater at Le Petit Trianon

At the conclusion of the Versailles portion of the tour, a taxi, slightly delayed due to strikes, dropped us off at the Versailles train station where we boarded an RER return train to the city. City Wonders Tours, owned by Simone Gozzi, offered the Full Day Versailles VIP Behind Locked Doors tour Fridays and Saturdays only for a maximum of 15 people. The company won the award for the best Guides and Products in Paris 2016 from Get Your Guide. The highlight of the tour was Herve, our friendly, knowledgeable and enthusiastic tour guide who brought the history of Versailles alive. We especially liked the well orchestrated tour logistics, intimate size of our group, and access to private areas. In the future we would be well inclined to book another tour with the same company and the same guide.