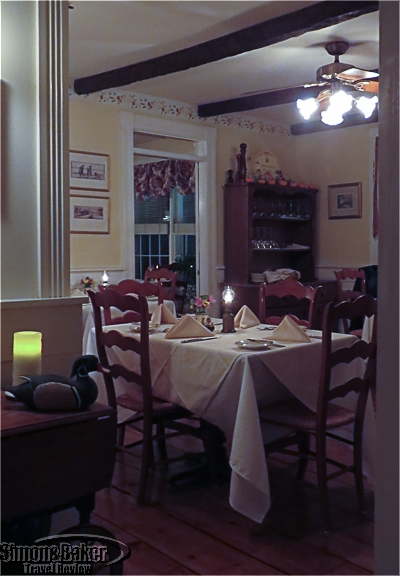 The restaurant in the Youngtown Inn

We arrived hungry at the Youngtown Inn and Restaurant in Lincolnville, Maine, after a day of driving and tourist activities with little time for lunch. Instead of driving the six miles from our nearby inn we opted for a taxi. Fortunately, it was early when we asked if the restaurant was near enough to walk. A smiling front desk staff person indicated it would be better to drive or rely on a transport service as it was several miles away down dark roads. Advance planning was necessary as it required 25 minutes before a taxi made its way to Linconlville Beach, where we were staying, from its base of operations in Rockport. It was the only taxi service available, the staff woman explained. 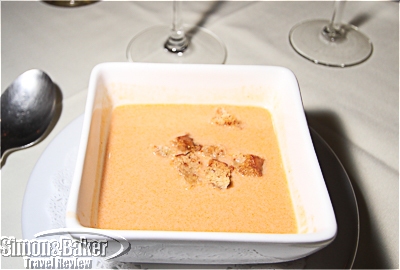 As the taxi van negotiated the dark residential roads and our tiredness sunk in we were glad of our decision. As we entered the restaurant, located within a classic 1810 farmhouse turned into a cozy four room inn, a distracted middle aged woman welcomed us, led us to our table and handed us menus. We explained that we needed a taxi and she offered to call the service when our dessert arrived. As the evening wore on her timing estimate proved to be spot on. Moments later, another personable woman arrived to announce the daily specials and bring us water. Although it was a weekend evening we were among few guests at the restaurant because of a nearby special event. 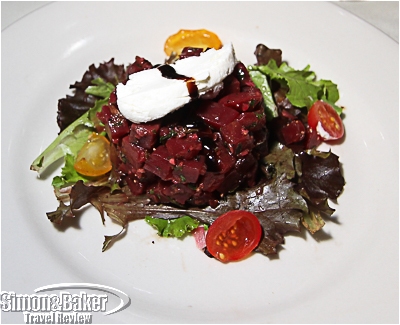 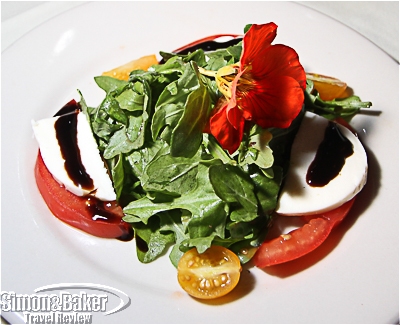 The arugula salad was garnished with a flower (click to enlarge)

While the set menu was well priced, the chef’s beef and lamb specialties were on only offer in the a la carte menu so we chose that one. There were two types of bread, whole wheat and sour dough. For starters we ordered Lobster Bisque with Sherry made with fresh lobster chunks, one beet salad and one arugula salad. For mains we had Pan Seared Black Angus Filet Mignon, Caramelized Onions, Roquefort and Roast Rack of Imported Lamb with Herbs de Provence (a favorite) both of which were well prepared. They were served with green beans, carrots and potatoes. Relying on our server’s advice we ordered a 2010 Billerond Saint Emilion to accompany our dinner. It was a good match for the meal, stout enough for the red meats yet well rounded and with a smooth finish. 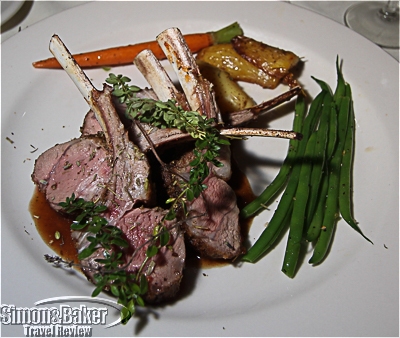 The lamb was moist and tasty (click to enlarge) 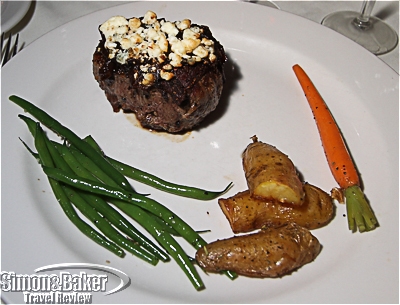 The filet mignon with the pepper sauce removed

Although the menu description of my filet mignon said nothing about pepper nor did the server mention it when I placed my order, the meat was sitting atop and covered in a thick black pepper sauce. After I raised the issue, the server took it back to the kitchen where they removed the sauce. She brought it back quickly and it was still hot, but the pepper flavor had penetrated the meat, making it difficult to enjoy my dish or taste the Roquefort cheese. 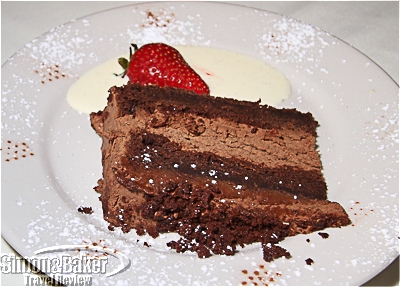 For dessert we had Tahitian bean Creme Brulee and Chocolate Truffle Cake. While the thin slice of cake didn’t look especially appetizing it had a rich chocolate flavor. Dinner was pleasant. The Youngtown Inn and Restaurant, 581 Youngtown Road, Lincolnville, Maine 04849, +1 207-763-4290, info@youngtowninn.com 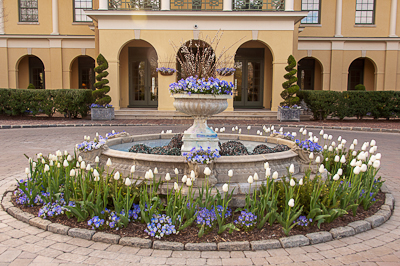 It is not unusual for friends who know that I am “always running off somewhere” to ask about my personal “short list” of favorite properties around the world; and be surprised that the list is quite short, of properties so exceptional in their location, surrounding, facilities, accommodations and service that I would gladly fly half way around the world to enjoy them again. On my recent visit to Charlottesville, Virginia I had the pleasure of adding one entry to my list, Keswick Hall. 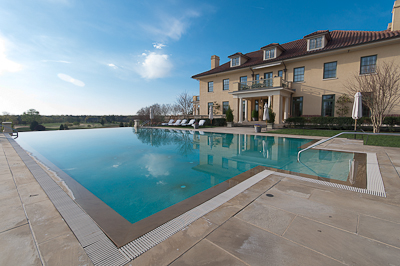 The elegant Italianate mansion located on 600 acres (243 hectares) of pristine countryside at the eastern edge of the city had the feel of a grand English country estate. As I drove around the circular driveway to the formal triple archway of the central entrance, I fleetingly wondered whether the walking shoes and jeans in which I had roamed all day from area wineries to remote artist studios were appropriate for the occasion. But already, the doorman was making me welcome like a long expected friend of the family. My luggage was out the trunk and my dusty rented car whisked away by the time I stepped through the open door into my “great uncle’s country mansion.” 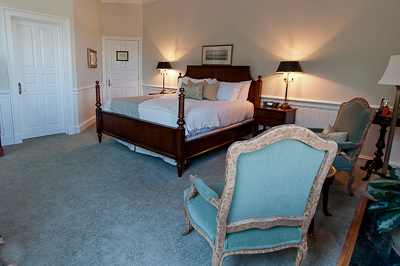 My room was a welcoming retreat of understated elegance

It was just as Sir Bernard Ashley intended when in 1991 he set out to transform the decaying Italianate Villa Crawford into a world class property where guests would feel they were staying at a private manor house. Three years and a $25 million major restoration and expansion effort later, he had created Keswick Hall. 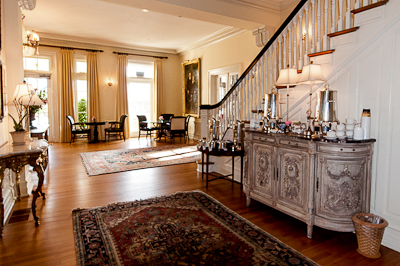 The historic North Wing had reclaimed its original opulence

In the central grand entrance hall, mellow oriental rugs created intimate spaces for clusters of inviting sofas, armchairs and antique accents furniture. Fresh flowers, in seemingly simple arrangement hinted at having been brought from the garden on a whim by an artistically minded lady of the house. 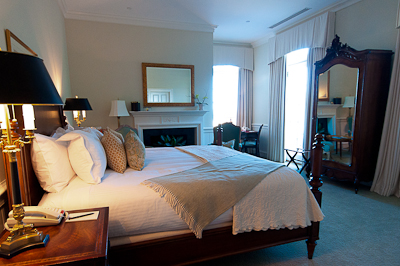 An antique mirrored armoire was a focal point of my room

In spite of its vast proportions, the room had a lived in feel, as though it had organically developed to its current gracious state through generations of residents. I had to remind myself to look for the reception area. It was there, an inconspicuous desk in the corner nearest to the entrance, as was the concierge desk, in the opposing corner of the hall. Both were staffed with knowledgeable and attentive hosts who appeared ready to assist with even the smallest of wishes. This was the norm for any staff member with whom I came in contact. 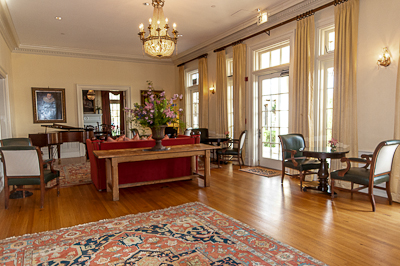 My own accommodations were equally welcoming, a large light filled room decorated in a relaxing neutral palette and a mix of antiques and period inspired furniture, and a French door that opened onto a large corner terrace with views of the garden and the manicured vistas of the golf course. Fossett’s, the property’s award winning restaurant, was remarkable not only for the quality of its classic continental cuisine with Virginia flair, but for it panoramic views of the estate’s rolling hills and the Blue Ridge Mountains beyond. 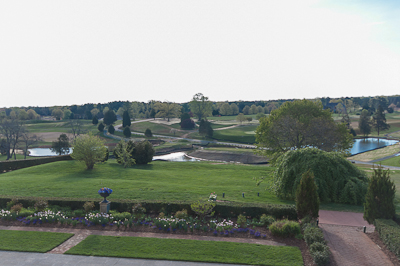 In addition to its flawless hospitably, Keswick Hall offered activities to indulge the most varied tastes, from the billiard room restored in the original Villa Crawford, now the Historic North Wing of the mansion, to an in-house spa, a croquet pitch overlooking the Southwest Mountains, spectacular 18 hole golf course, nature walk and bird watching trails, aquatic center and tennis courts. It even had its own courtside vineyard. But for me, the ultimate luxury was the Horizon Pool, the adults only, heated saltwater infinity pool that reflected the north façade of the mansion. Best of all, it was open around the clock.